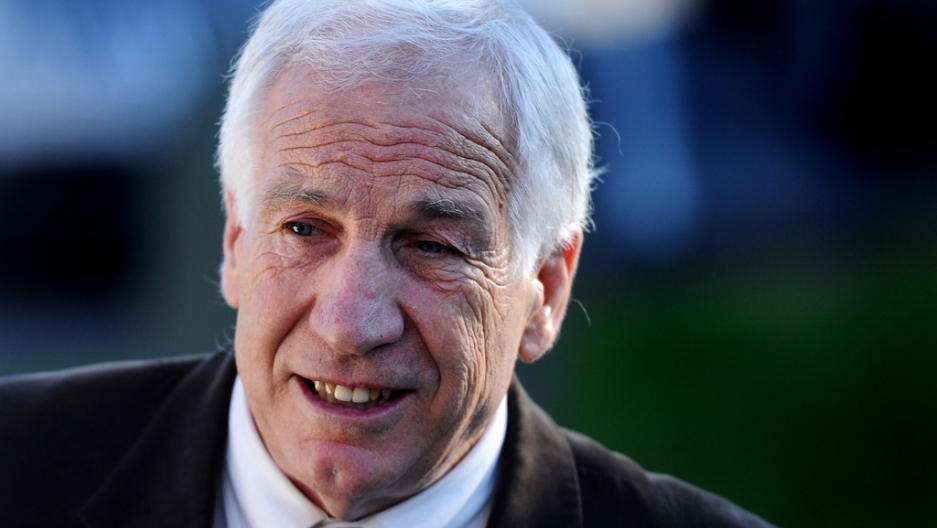 Sandusky's likeness on a famous mural across from the Penn State campus has been replaced with an image of Dora McQuaid, a Penn State graduate who is now a poet and an advocate for domestic and sexual abuse victims, the Associated Press reported.

Local muralist Michael Pilato first took Sandusky out of the portrait in November, replacing him with a blue ribbon, the symbol of awareness for child sexual abuse. But that wasn't enough for a community still reeling from the allegations against their former assistant football coach.

“The title of the mural is ‘Inspiration’, so the people in the mural are inspirational people,” Pilato told Penn State newspaper Onward State. “With just the blue ribbon there, you still saw Sandusky.”

Pilato also replaced Sandusky's image with two red hand prints: one belonging to Ann Van Kuren, one of the 12 jurors who convicted Sandusky, and the other to a victim of sexual abuse, the AP reported.

"I really feel for the victims and any other victims that are out there that haven't come forward and told their stories," Van Kuren told the AP. "I'm hoping that this trial, with this verdict, will help them heal."

On Tuesday, NBC News played a recording from Matt Sandusky, in which he told police he was abused by Sandusky starting when he was 8, twelve years before the former Penn State assistant football coach adopted him, the Associated Press reported.

“Although the tape was released without Matt’s knowledge or permission, it illustrates that he made the difficult decision to come forward and tell the painful truth to investigators despite extraordinary pressure to support his father,” his lawyers Justine Andronici and Andrew Shubin wrote in a statement, according to the AP.

68-year-old Sandusky is currently under observation at the Centre County jail, awaiting a psychological review that will guide his sentencing in about three months, the AP reported. He maintains that he is innocent.