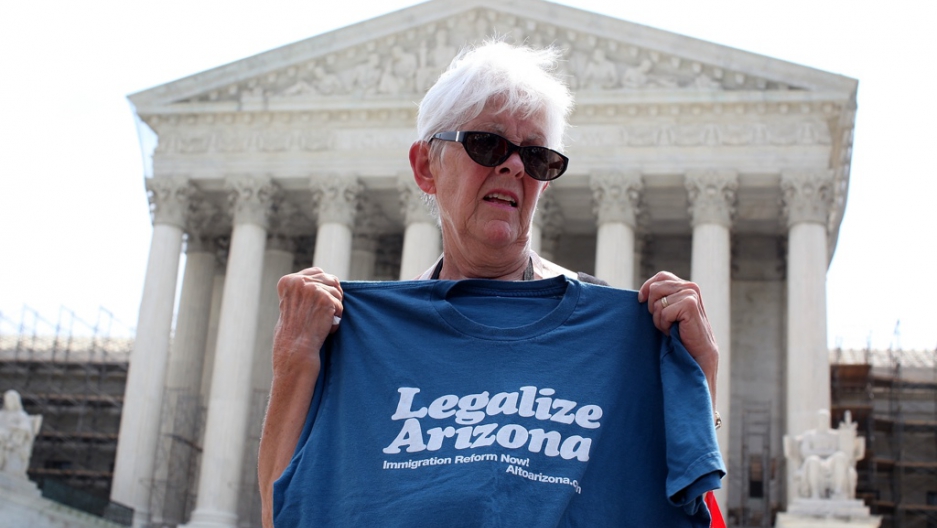 Jane Pauk, of Phoenix, Ariz., pushed for support of her state's controversial immigration reform in front of the US Supreme Court.
Credit: Alex Wong
Share

The first thing that strikes a recently arrived visitor to Arizona is the large number of traffic patrol cars on the highway. Barely a mile goes by without seeing some unfortunate pulled over to the side of the road, police lights flashing, car doors opened, sometimes a small crowd of people standing around looking worried.

When I asked a friend, a resident of Arizona, what gives, he laughed.

Most of Arizona’s tough immigration law, SB 1070, was just struck down by the Supreme Court. State officials can no longer arrest or deport illegal immigrants — this, said the court, is the purview of the federal government. Arizona cannot impose harsher penalties for failing to register, for seeking employment, and a few other infractions, than Washington has designated.

From GlobalPost: Want to give America's next president a piece of your mind? Here's how.

But the Supreme Court has left in place the most controversial provision of SB 1070 — the so-called “show me your papers” clause that requires law enforcement officials to ascertain the immigration status of anyone otherwise “lawfully detained.”

Therein lies the rub: What constitutes “lawful detention”? As Arizona’s Latinos can attest, almost anyone can be pulled over on the highway for almost any reason. Few drivers adhere religiously to the speed limit, always signal when changing lanes, or invariably pull over when passing an emergency vehicle.

For most, these things go without consequence. With my fair hair and light skin, I was never stopped in Arizona, although I have been known to have a heavy foot on the gas pedal.

But for those of darker complexion, detention is a daily threat. I have spoken to numerous Latinos — mostly of Mexican descent — all of whom had tales of woe about their treatment at the hands of Arizona law enforcement.

Critics of SB 1070 fear it will lead to racial profiling; supporters of the bill know it will.

“I don’t have a problem with racial profiling,” said Connie Thomason, a retired stockbroker who lives in Tucson. “Some things are statistically more apt to happen with certain groups. What might appear to be racial profiling is actually just common sense.”

According to Thomason, Arizona was fully justified in imposing SB 1070, even though, as she said, “everyone knew it would lead to racial profiling. It is just one of those things. We have asked and asked for help in securing our borders, and the federal government does nothing.”

This is a common attitude in Arizona, where Gov. Jan Brewer has assailed the Obama administration on numerous occasions for failing to enforce federal immigration law. On Monday she accused the administration of telling Arizona to “drop dead.”

Justice Antonin Scalia added his indignation to Brewer’s, delivering a scathing denunciation of federal immigration policy in an unprecedented dissent to the court’s ruling. Not only did Scalia insist that Arizona’s law should have been upheld in its entirety, he lambasted President Barack Obama for his executive order granting a temporary stay of deportation for younger undocumented immigrants who are working or going to school.

Arizona’s politics are dark and prickly, with many residents seemingly angry at just about everything: welfare, liberals, government regulation, unions — anything that contradicts the hardscrabble work ethic of the conservative population. Illegal immigration is just one issue among a multitude.

But it has caused a stir. Arizona’s most infamous law enforcement official, Sheriff Joe Arpaio of Maricopa County, is under investigation by the US Justice Department for civil rights violations, caused by his treatment of those under detention, as well as for discriminatory practices in enforcing SB 1070.

Arpaio has also been accused of trying to intimidate his opponents, including journalists who criticize him, as well as those pursuing the investigations against him.

In Arizona and neighboring Colorado, there were sources willing to speak — albeit in hushed tones and very much off the record — about measures being undertaken by Arpaio’s staff to impede the investigation into the pugnacious sheriff.

Arpaio will doubtless feel vindicated by the court’s decision, which allows him to continue the “sweeps” of suspected illegal immigrants that his force has been conducting.

Arizona, with its long border with Mexico, might appear to be the main recipient of undocumented immigrants — but it is not even in the top five, according to the 2000 US census.

California, Texas, New York, Illinois and Florida all have far more illegal immigrants than Arizona. Oddly, they are not among the five states that have tried to pass similar laws to Arizona’s — Utah, Indiana, South Carolina, Alabama and Georgia.

With elections looming in November, the Hispanic vote could determine the outcome in several swing states — including Arizona. Both Obama and his challenger, former Massachusetts Gov. Mitt Romney, have attempted to woo Latinos.

Romney is having a hard time steering between his conservative base and the Hispanic community. Early on, he had identified himself as a harsh opponent of illegal immigration. The Supreme Court’s decision has left him in an uncomfortable position — he will not say outright whether he supports or condemns it.

Obama, on the other hand, said he was “pleased” by the ruling, and vowed to keep a stern eye on Arizona’s enforcement of the “show me your papers” provision that the court left in place.

But Obama’s executive order on immigration, issued just last week, has excited many in the Hispanic community, like Ruben Aguilar, from Rock Island, Ill.

“I am third generation American,” he said proudly. “My grandfather was a migrant worker, and my mother, who is a schoolteacher, still picks tomatoes when she can’t get work. We are barely holding on, but at least we are citizens. Many of my relatives are not.”

“We want a piece of the American Dream like everyone else,” he said.