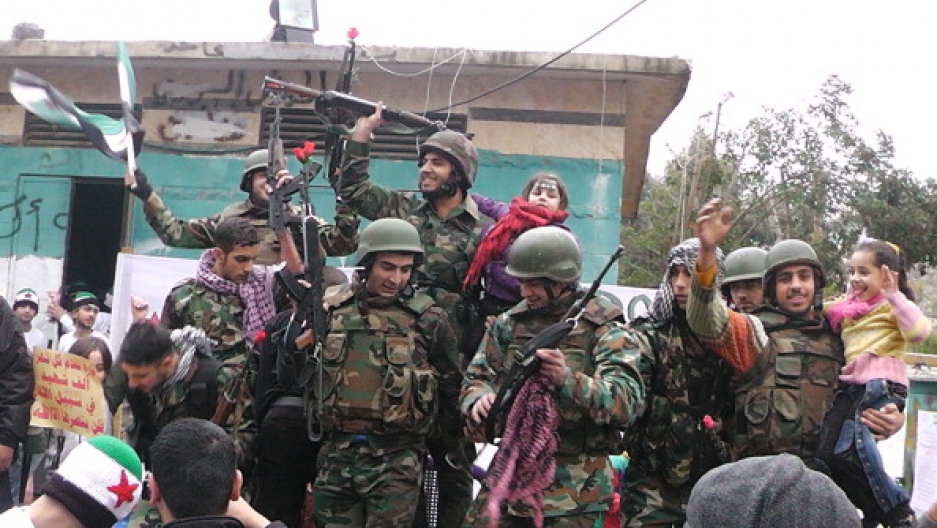 Syrian soldiers who defected join protesters in the al-Khaldiya neighborhood of the restive city of Homs on January 26, 2012. The Britain-based Syrian Observatory for Human Rights said the army launched an offensive on Thursday evening in the Karm al-Zeitoun district of Homs, killing 26 civilians, including nine children, and wounding dozens.
Credit: -
Share

Several members of Syria's military have defected and are being sheltered in Turkey, Turkish media says.

A Syrian general, two colonels, two majors, a lieutenant and around 30 other soldiers crossed the border into Turkey last night, according to state television reports cited by Reuters.

They and their families were reportedly among some 200 people who made their way to Turkey's southern Hatay province overnight. They have been taken to a refugee camp a few miles inside the border, the BBC said.

More from GlobalPost: NATO to meet over downed Turkish plane

Turkey says 12 other Syrian generals have already defected, but according to Reuters, "there has been little indication of any broader trend to desertion in the senior ranks of the armed forces, bound often to Assad by their Alawite background."

Most defectors so far have been "low-level conscripts," Al Jazeera said.

One Syrian colonel, one of at least four officers reported to have defected last week, told the network that many more members of the military wanted to join the opposition, but feared violent repercussions for their families.

If other countries were to support a secure "buffer zone" for refugees on the Syria-Turkey border, Abdal Fareed Zakaria said, "in one week you will not see anyone with the regime."

The latest reported defections come as Turkey prepares to announce how it will respond after Syria shot down one of its military jets. The Turkish cabinet is due to discuss the question today, while NATO will hold an emergency meeting tomorrow, at Turkey's request.

"No one should try to test the capacity of Turkey," Turkish Foreign Minister Ahmet Davutoglu wrote on Twitter last night, according to the New York Times. "Turkey has never acted alone concerning Syria. Has always been part of regional and [international] initiatives."