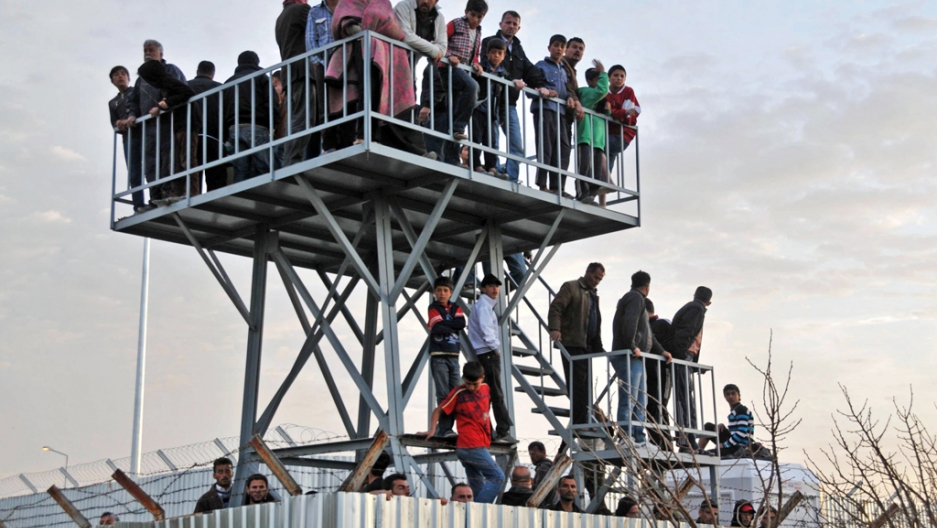 Syrian refugees watch the border from Oncupinar Refugee Camp on April 9, 2012 in Kilis. Two other Syrians and Turkish translator were wounded near a refugee camp in the same area when shots were fired from Syria, as border tension escalated ahead of a visit by top international mediator Kofi Annan.
Credit: IHA
Share

Turkey said Syria fired on a plane which was taking part in a rescue operation for the jet shot down by Syrian forces last Friday, according to the BBC.

Turkish Deputy Prime Minister Bulent Arinc said the CASA search and rescue plane was not brought down. He said Turkey had "no intention" of going to war, but vowed that Syria would "not go unpunished," according to the BBC.

Syrian Foreign Ministry spokesman Jihad Makdissi said on Monday that Syria's gunners had no idea the aircraft was Turkish.

Speaking in Damascus, he said that Syria valued its "brotherly" relationship with Turkey, but also said the location and speed of the jet was a "clear breach of Syrian sovereignty," according to The Washington Post.

Makdissi said, "Syria reacted to the breach. We had to react immediately. Even if the plane was Syrian, we would have shot it down."

Turkey said it would push NATO to consider the downing of the first jet as an attack on the whole military alliance, according to the Associated Press.

Article 5 in the NATO alliance treaty states that an attack on one NATO member shall be considered an attack against all.

Arinc's announcement on Monday came the day before NATO is scheduled to meet and discuss the incident.

According to the Turkish government, the unarmed RF-4E reconnaissance jet was shot down in international airspace on Friday, said the AP.

Responding to the NATO gathering, Makdissi said, "if the goal of that meeting is aggression, we say that Syrian airspace, territory and waters are sacred," according to The New York Times.

Turkish officials on Monday also reported that a group of high-ranking Syrian military officers had defected, according to The Times.

A meeting of European Union foreign ministers released a statement condemning "the unacceptable shooting down by Syria of a Turkish military plane," said The Times.

White House spokesman Jay Carney said on Monday that the US stood in solidarity with Turkey on the incident as it investigated what happened. He said, "We will work with Turkey and other partners to hold the Assad regime accountable," while sidestepping questions on what an appropriate response might be, according to Reuters.

Pentagon spokesman George Little said, "This once again shows the illegitimacy of the Assad regime and what it's doing and is deeply troubling," according to Reuters.