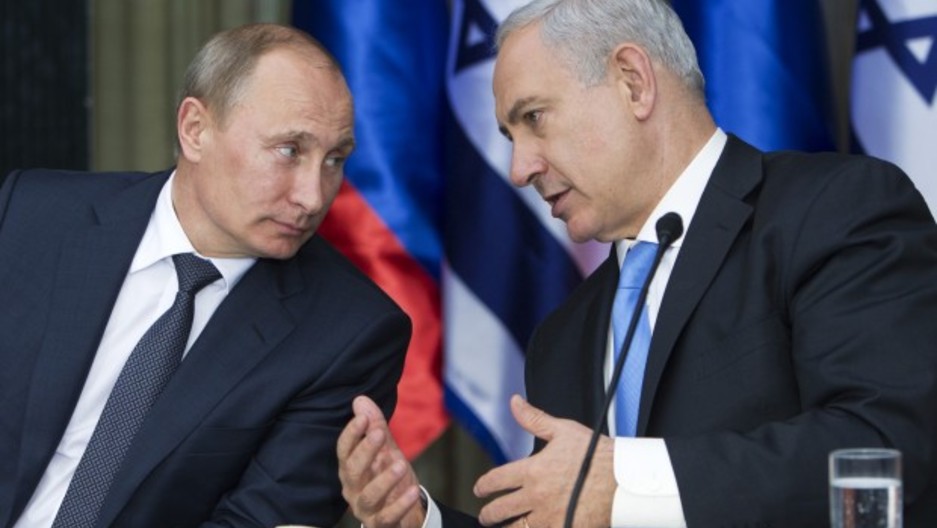 Share
Russian president Vladimir Putin paid a quick visit to Israel Monday, and he'll be moving on to the West Bank and Jordan Tuesday. He comes to the region at a complex moment: Israel is weighing a possible strike on Iran over its nuclear ambitions. Russia just hosted the latest round of talks with Iran, asserting itself as a key mediator on this issue — a mediator Israel wants to influence. Russian President Vladimir Putin stopped in Israel for just a day, but he got the royal treatment. Jerusalem's premiere hotel, the King David, which hosts visiting heads of state, canceled all of its reservations to make room for Putin and his entourage. According to Israeli officials, Putin is here with an almost unheard of entourage of nearly 400 people, including military brass, businesspeople, journalists. For dinner, Israel's president invited Russian-Israeli singers to serenade Putin. One of Russia's biggest diasporas is in Israel. More than a million Russian speakers live in the country today, and they've made their mark just about everywhere. A watering hole in Jerusalem, for instance, plays Russian hits, including an old tongue-in-cheek pop song called "We Want Putin". The bar itself is named after the Russian president: it's called Bar Putin. "The name is not political. It's a joke," said the waitress, Yulia. Yulia said she is not the Russian president's biggest fan, but she is happy he came to the country for a visit. "It's good, good we will be friends…Israel and Russia," she said. President Putin is in Israel just days after Moscow hosted the latest round of talks with Iran —and Israel is keen to know what Russia and Iran have been talking about. "I think part of this dialogue will be hearing from the Russians, and receiving an update on the talks in Moscow," said says Yacov Livne, who heads Russian affairs in Israel's foreign ministry. "We need to read from same book and even better, same page, when it comes to Iran." Israel and Russia, though, are not altogether on the same page when it comes to that country: Russia helped Iran build a $1 billion reactor in Bushehr, and has worked to soften international sanctions against Iran and Syria. "I'm confident that Russia, which was hit by fascism, will not allow similar threats: not an Iranian threat, not Syrian bloodshed," said Israeli President Shimon Peres at a ceremony with Putin. Israel hopes it can sway Russia with some very enticing goodies. Russia is interested in Israeli military aircraft, which is significant; Israel is just one of two countries in the world known to sell arms to Russia. Russia also hopes to cash in on some of Israel's newly discovered natural gas in the Mediterranean. But could these possible deals make Russia change its mind on Iran and Syria? "We can't delude ourselves into thinking we are so important that we can in any way change Russian policy toward Iran or any important issue," said Yaakov Roi, a Russia expert at Tel Aviv University. He said sales of military hardware to the Iranians and Syrians are one of the Russians' biggest money makers. No way they would back down from those deals, he said. There's another reason the Russians are staying close to Iran and Syria: according to Roi, the Russians want to increase their "nuisance value" vis-Ã -vis the West. "The West shouldn't think they can influence Iran without Russia, or influence Assad without Russia. Therefore they pump in anything they can to Syria and into Iran in order for them to be sure they're at every negotiating table or any arrangement reached," Roi said. Why is Russia interested in being at negotiating table? "For great power," Roi said. Bottom line: even if Israel can't convince Russia to reverse course on its interests in Iran and Syria, it's wining and dining the Russian president to do what it can to influence a key pawn in the complex regional chess game.