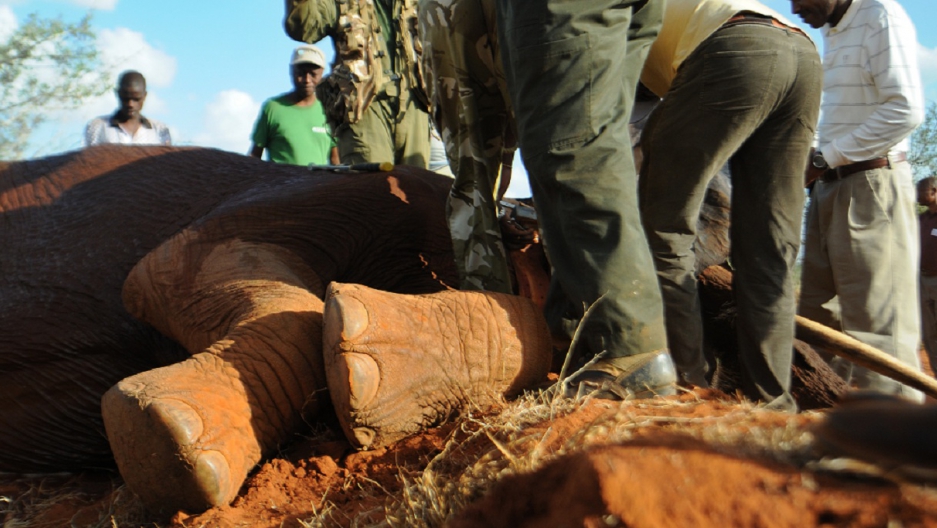 A sedated Elephant is processed and collared by experts at Kenya's Tsavo-east National park in Mar. 2012 as part of efforts to crackdown on a dramatic increase in poaching.
Credit: TONY KARUMBA
Share

Kenya security dogs at Nairobi airport Friday sniffed through a layer of pepper to uncover 600kg of illegal ivory bound for Nigeria.

"Kenya Wildlife Service (KWS) Canine Unit together with Police and Customs officials at Kenya's main airport in Nairobi have intercepted 345 pieces of raw ivory weighing 601kg destined for Lagos, Nigeria," KWS said, according to Agence France-Presse. "The ivory, packed in six crates and sprayed with pepper to prevent dogs from sniffing it, had been further covered with aluminum foil."

Authorities have launched an investigation into the origin and the owners of the illegal cargo, which was to be flown on Ethiopian Airlines, reported the New York Daily News. KWS spokesman Paul Mbugua also said that a forensic laboratory would establish facts allowing them to know the source of the tusks.

"The round-the-clock surveillance has been enhanced at all Kenyan exit and entry points while sniffer dogs and their handlers have proved incorruptible and have once again outsmarted the smugglers," Paul Udoto, affairs manager at KWS, said to the Daily News.

The east African country is among nations in Africa where poaching is rampant, despite it having been outlawed in 1977, according to Bernama. Poachers generally target rhino and elephant tusks and skin, which are said to go for large sums of money on Asia's black markets.

AFP also reported that Africa is home to an estimated 472,000 elephants whose survival is threatened by poaching and illegal game trophies trade, as well as increasing population, which is causing habitat loss.