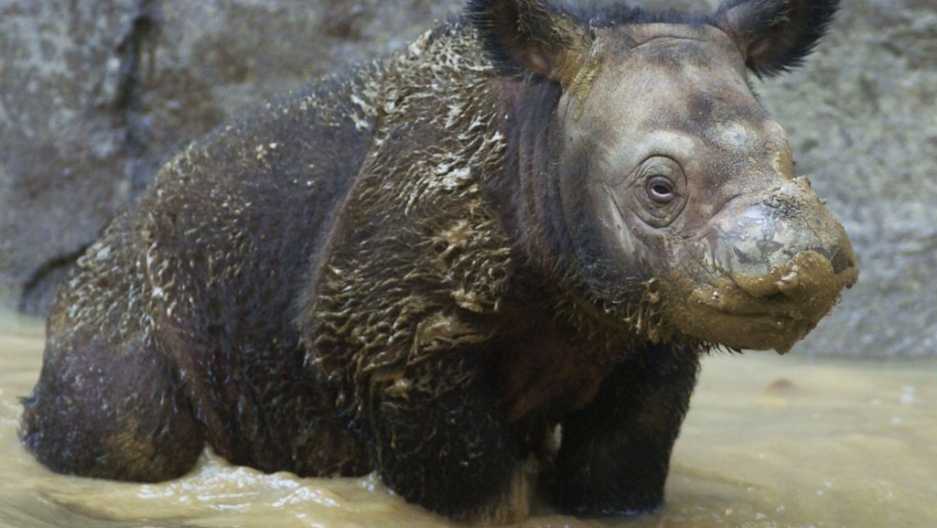 A three-week-old Sumatran rhinoceros at Cincinnati Zoo in 2004. Another calf was born in Indonesia today, only the fifth birth in captivity ever recorded.
Credit: Mike Simons
Share

A Sumatran rhinoceros, one of the world's most endangered animals, has given birth at a sanctuary in Indonesia.

Both animals are said to be doing well.

Sumatran rhinos are the smallest and most endangered of all rhino species, according to the AP, with an estimated 200 living in the wild in south-east Asia and another 10 in captivity around the world.

Only five other Sumatran rhinos are known to have been born in captivity, ever. The new calf's father, Andalas, was the first captive birth in 112 years when he was born at Cincinnati Zoo in Ohio in 2001, Agence France Presse reported.

Conservationists hope the latest birth will help their research into how to keep the species from going extinct.

The International Rhino Foundation (IRF), which helped monitor Ratu throughout her 16-month pregnancy, said it would take tissue samples from the newborn rhino's placenta in order to generate stem cells for use in later research.

Scientists hope the cells could have applications such as curing diseases and helping promote reproduction.

Without ongoing protection and breeding efforts, the species could be extinct by the end of this century, the IRF warned. The chief threats to its survival are the destruction of its forest habitat and poaching for its valuable horn.

More from GlobalPost: Prince William helps save the rhinos