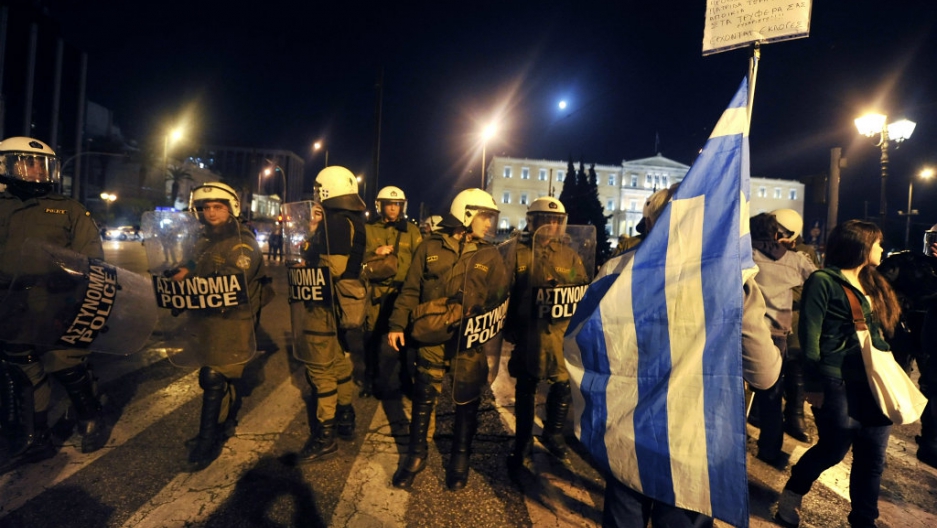 BRUSSELS — Europe desperately needs a plan to save the euro. The problem is that European leaders have come up with half-a-dozen plans and, as usual, they are deeply divided over which one can prevent the currency's collapse.

If the 27 European Union leaders can't agree on a coherent plan to stop the rot when they meet on June 28-29, the euro will slip closer toward a chaotic demise. Expect riots in Greece, Spanish bond yields soaring toward breaking point and intensified threats to the survival of Italy's technocratic government.

The last few days have seen some positive signs: the formation of a pro-Europe government in Greece; an agreement Friday by Germany, France, Spain and Italy on a "growth pact" worth up to 130 billion euros to inject some life into the stagnant euro-zone economy; market pressure easing on Spanish, Italian and Portuguese debt.

However fear levels in Europe's capitals are running as high as any time since the crisis began.

"As Europeans suffer, the rest of the world is watching the suicide of this beautiful story of a group of countries who after the darkness of war were able to advance together toward a visionary future. Now they are leading each other to failure," Solana warned.

The latest plan to head off the euro apocalypse was put forward by Italian Prime Minister Mario Monti at this week's G20 summit in Mexico. It involves activating the EU's 440 billion euro rescue fund to buy up the bonds of troubled countries - like Spain and Italy - in an effort to bring down the record interest rates forced on them by jittery markets.

The plan has been welcomed by several EU states but is widely seen as a short-term palliative that would ease immediate pressure on the deeply indebted nations, but not tackle the euro's underlying problems.

For that, France is backing calls for a banking union that would lead to a centralized European bank supervisor with powers to wind down those that are no longer viable, plus a mechanism for the euro zone as a whole to guarantee savers' deposits, taking pressure of individual nations.

More from GlobalPost: How soccer and the euro crisis are the same

The European Commission is pushing euro bonds which would spread debt burdens across the whole 17-nation currency bloc.

Then there is the European Redemption Pact, put forward by the German Council of Economic Experts which advises the government in Berlin. It would allow euro zone nations to transfer any debt over 60 percent of gross domestic product - a total 2.3 trillion euros at current levels - into a redemption fund, guaranteed by the zone as a whole. In return, all members would pledge never again to let their debt exceed the 60 percent threshold.

Some see the pact as a silver bullet to kill the crisis and the European Parliament voted overwhelmingly to back the idea last week.

All of these plans have influential supporters, but the German Chancellor Angela Merkel is not among them. Since Germany is the only country in Europe with the financial clout to make any plan work, without support from Merkel they will get nowhere.

The chancellor is facing intense international pressure to show flexibility, but so far she is not for turning.

Merkel insists that none of the above can be countenanced until the euro zone evolves into a fiscal and political union. That would see members surrender unprecedented powers over their national finances to federal-style European authorities committed to implement Germanic financial rigor.

"We need more Europe, that means more solidarity," Merkel said. "But where there is solidarity there must be control. Europe always had rules, but we didn't always respect them," she told a news conference after a pre-summit summit in Rome with the leaders of France, Italy and Spain.

Leaders from the other members of the euro zone's four biggest economies agreed in vague terms on the need for "more Europe." They may find however that democracy gets in the way.

Such a leap toward a federalist Europe would face widespread opposition, not least in France where the Socialist Party has just surfed a wave of anti-austerity sentiment to capture the presidency and a parliamentary majority.

President Francois Hollande would risk rebellion at home if he were to hand over control of the economy to penny-pinchers in Brussels or Berlin. Even if he were inclined to do so, voters in France, Ireland one of the other 17 euro zone countries can usually be relied upon to scupper such grandiose federal Europe plans if they get the chance of a referendum.

"Transferring sovereignty (to Europe), that will depend on solidarity," Hollande said, turning Merkel's words around at Friday's news conference in Rome. "There can be no transfer of sovereignty, if there is not more solidarity and coherence."

Where does that leave the euro?

Senior officials suggest their may be a compromise emerging at the summit in Brussels next week that would clear the way for Monti's proposal on bond-buying by the EU rescue fund, plus some sort of a commitment to the board outlines of EU banking and fiscal unions. Details would be filled in over the weeks ahead.

Hollande insisted euro bonds remained a medium-term objective in the context of that future fiscal union. The euro-zone big four also announced plans to move ahead with a tax on financial transactions, even though Britain, home to the Europe's biggest financial center in the City of London, has ruled out participation.

"We are heading for more integration in the future - banking, fiscal, monetary and political integration," Spanish Prime Minister Mariano Rajoy said in Rome. "We will put all the measures in place to underscore that the euro is permanent and irreversible."

The euro has a week to find out if the leaders will make good on such fighting talk, and if markets will buy their plan.