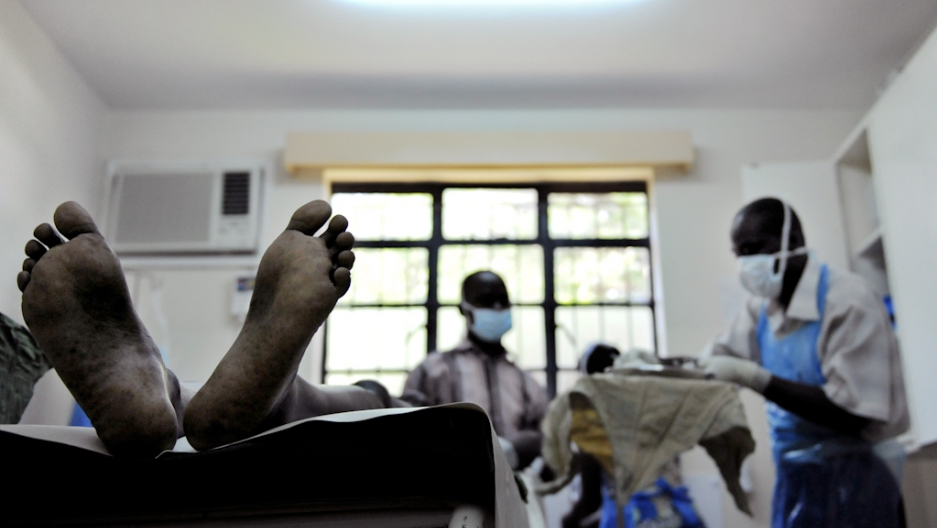 A man lies in a surgical theater waiting to undergo a circumcision procedure at a donor-funded clinic in Kenya's lake-side town of Kisumu. A group of male lawmakers in Zimbabwe have agreed to be circumcised June 22, 2012 as part of a HIV/AIDS prevention campaign. The MPs will also undergo HIV testing and counseling.
Credit: TONY KARUMBA
Share

JOHANNESBURG, South Africa — A group of male Zimbabwean lawmakers are getting circumcised today in a makeshift clinic at Zimbabwe's Parliament, as part of a new HIV/AIDS prevention campaign.

More than 60 members of parliament from both of Zimbabwe's main political parties underwent HIV testing and counseling yesterday in an effort to inspire citizens to follow suit.

The state-run Herald newspaper reported that male legislators will voluntarily undergo circumcision today at the clinic set up at the Parliament building in Harare.

“The response by MPs was very high and we are now doing group counselling sessions to prepare us for the main event on Friday,” Blessing Chebundo, chairman of the group Zimbabwe Parliamentarians Against HIV and AIDS, told NewsDay.

According to Chebundo, 68 legislators have been volunteered to be circumcised.

This is a first-of-its-kind campaign involving Zimbabwe's leaders. While several studies have shown that circumcised men have substantially lower risks of contracting HIV, in the past, some MPs in Zimbabwe have recoiled at the thought of undergoing the snip.

The BBC said that by noon local time, four MPs had undergone the circumcision procedure, and more were expected this afternoon. Some members of the executive, including President Robert Mugabe, may even attend the event, the BBC said.

Zimbabwe's HIV infection rate has dropped from 23 percent of the population in 2003 to 14 percent in 2009, according to the UN. The country has 1.2 million people living with HIV/AIDS.

“It is a momentous occasion when politicians who are not known to walk their talk are beginning to do that,” parliamentary clerk Austin Zvoma told legislators participating in the HIV test, the Herald reported.

But some Zimbabweans were cynical about the HIV testing, with one commentator joking on a Zimbabwean news website: "As always the results will be rigged."

Last month, MP Felix Magalela Sibanda told the House of Assembly he was not comfortable with circumcision, NewsDay reported.

Sibanda said: “HIV should be a syllabus for the youths at a tender age – not to tell us here in Parliament when I am already 65 years old and you tell me to go and get circumcised when I have sired 18 children without circumcision."