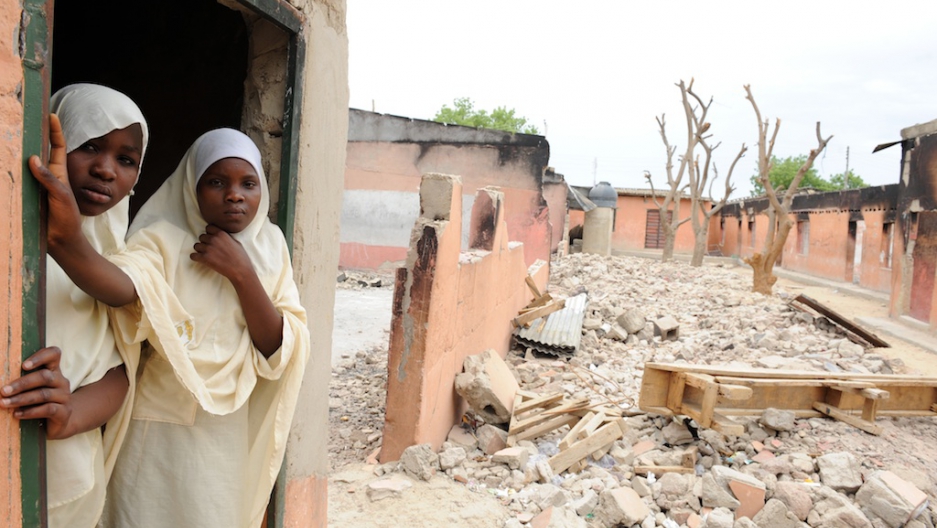 Female students stand in a burned classroom at Maiduguri Experimental School, a private nursery, primary and secondary school burned by the Islamist group Boko Haram to keep children away from school in Maiduguri, northeastern Nigeria on May 12, 2012. The Nigerian Islamist group known as Boko Haram has grown from a northeastern-focused sect targeting local leaders and police to a many-headed monster capable of deploying suicide bombers to attack United Nations offices in Nigeria, police headquarters and one of the country's most prominent newspapers.
Credit: Pius Utomi Ekpei
Share

With its roots firmly in northern Nigeria's combustible mix of religious tension, economic marginalization, widespread poverty and growing population, Boko Haram is, to be sure, a threat to Nigerian security and Nigerian people, but not, so far, to the US.

Instead the State Department announced the designation of three top Boko Haram leaders as global terrorists
in a move seemingly designed to put pressure on the group and encourage divisions.

Among the three named is Abubakar Shekau, the group's current leader. The two others are described as link men between Boko Haram and Al Qaeda in the Islamic Magreb (AQIM) which has recently taken control of parts of northern Mali and is already a US- designated terrorist group.

According to the US statement, Boko Haram has been responsible for over 1,000 deaths in the last 18 months during a campaign of bombing attacks often targetting churches in northern Nigeria as well as government offices, security forces, the UN and media houses.

The designation is largely symbolic as it blocks US citizens from doing business with the men and permits the seizing of their US assets, neither of which is likely to apply in this case.

More from GlobalPost: Controversial strongman steps up, says he can save Nigeria