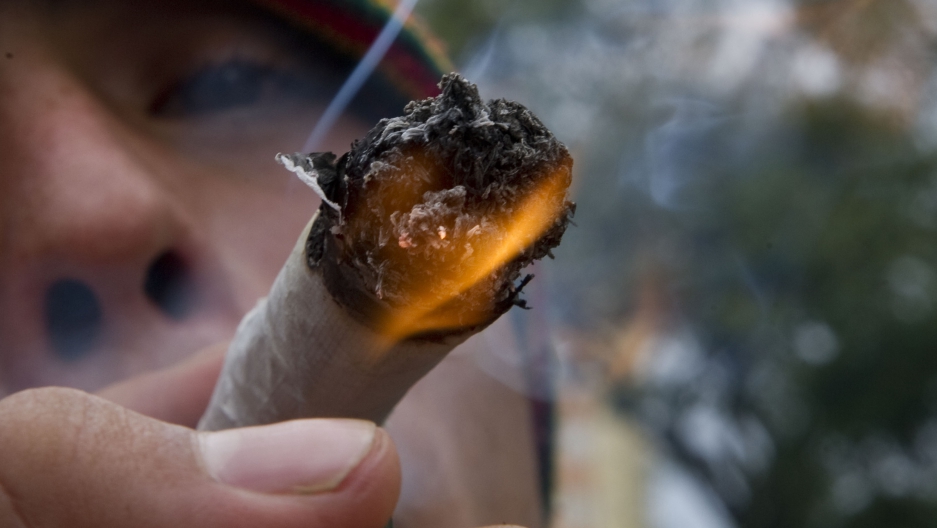 A smoker tokes a marijuana joint during a march for the legalization of cannabis in Medellin, Colombia on May 5, as part of the 2012 Global Marijuana March that was held in hundreds of cities worldwide.
Credit: Raul Arboleda
Share

LIMA, Peru — Uruguay’s government wants to become the first in the world to sell cannabis.

This week, Uruguayan President Jose Mujica sent a bill to Congress that would allow a chain of nationalized dispensaries to supply the soft drug in controlled amounts to registered adult users.

The measure, which lawmakers are expected to approve, is a response to a violent crime wave triggered by the growing use of harder drugs in Uruguay, traditionally one of the safest nations in Latin America.

Announcing the bill on Wednesday, Defense Minister Eleuterio Fernandez Huidobro specified that it would reduce consumption of crack and other cheap, highly addictive coca derivatives.

“We want to fight two different things: one is the consumption of drugs and the other is the trafficking of drugs,” Reuters quoted him as saying.

“We believe that the prohibition of certain drugs is creating more problems in society than the drug itself. Murders have risen as a result of the settling of accounts [between rival drug dealers] and this is a clear symptom of the appearance of certain phenomena that did not exist previously in Uruguay.”

The move comes as part of a growing trend across the Americas — including the United States — to decriminalize marijuana consumption, reduce penalties for its use or simply have police turn a blind eye to discrete joint-smoking.

It was immediately welcomed by Ethan Nadelmann, executive director of the New York-based Drug Policy Alliance. The anti-drug war advocacy group has advised officials from a number of countries on narcotics reform. Nadelmann described Uruguay’s move as a “very bold step forward,” although he also sounded alarm bells about the fine print of the bill.

“A government monopoly is rarely the best form of regulation,” he said in a statement. “Uruguay should closely study existing models such as the cannabis coffee shops in the Netherlands, social clubs in Spain, and the medical marijuana dispensaries in the United States.”

The use and possession of small amounts of cannabis is not actually illegal in Uruguay, although growing or selling it is. The new law would change none of that. Instead, it would simply bring all marijuana sales under state control.

Initially, President Mujica, a former leftist guerrilla, envisages the state actually growing as well as selling marijuana. Further down the road, the growth — but not the sale — of the drug could be left to private companies. Cannabis revenues would be taxed and the cash would be used to treat drug addicts.

Uruguay appears ready for the move with even opposition senators offering a cautious welcome. One, Luis Lacalle Pou, of the center-right National Party, has his own bill to legalize cannabis cultivation for personal use before Congress.

Approving the government attempt to undercut the drug peddlers’ business model, he tweeted: “I don’t believe it would be a good thing to continue associating marijuana with money.”

Uruguay’s move is the latest in an accelerating trend against the traditional policy of drug prohibition in Latin America.

Latin American leaders have grown weary of the US-led war on drugs, first launched by President Richard Nixon in the 1970s. While targeting mainly the cocaine supply chain from the Andes through Central America to US consumers, it has caused tens of thousands of deaths, especially in Mexico.

Yet in spite of costly military assaults and drug busts, consumption and addiction of outlawed narcotics has spread among the countries at the heart of the drug conflict faster than societies or governments can cope.

Mexican President Felipe Calderon has called for “market” alternatives to prohibition to be looked at. His Colombian counterpart Juan Manuel Santos is on record as saying he would not oppose legalization and Guatemalan President Otto Perez Molina is also calling for a new approach.

Interestingly, all three are political conservatives with strong track records of fighting the drug cartels.

“An erroneous decision by Nixon has been what has caused all these disasters, declaring a war that has been won by the narco-traffickers,” Fernandez Huidobro told Uruguayan paper El Pais.

Already in many Latin American countries, including Argentina, Brazil, Peru and Mexico, police often in practice turn a blind eye to discrete stoners.

Meanwhile, in the US, the trend begun in California to liberalize cannabis use and allow dispensaries under state law appears to be spreading.

Meanwhile, across the US there are local attempts to roll back either statutes or law enforcement targeting cannabis consumption. Last year, for the first time, a poll, by Gallup, found that more than 50 percent of Americans back legalization.

And in Europe, there is also a growing move toward tolerating cannabis smokers, particularly in Portugal and Spain. Even in Iran, a country not known for its progressive public policies on any issue, possession of small amounts of cannabis is permitted.

Ironically, though, Uruguay’s move comes just as Holland, the country long at the forefront of the global marijuana movement, has begun to crack down in an attempt to reduce narco-tourism. Now, in many municipalities only registered locals are allowed into the country’s famous cannabis cafes.