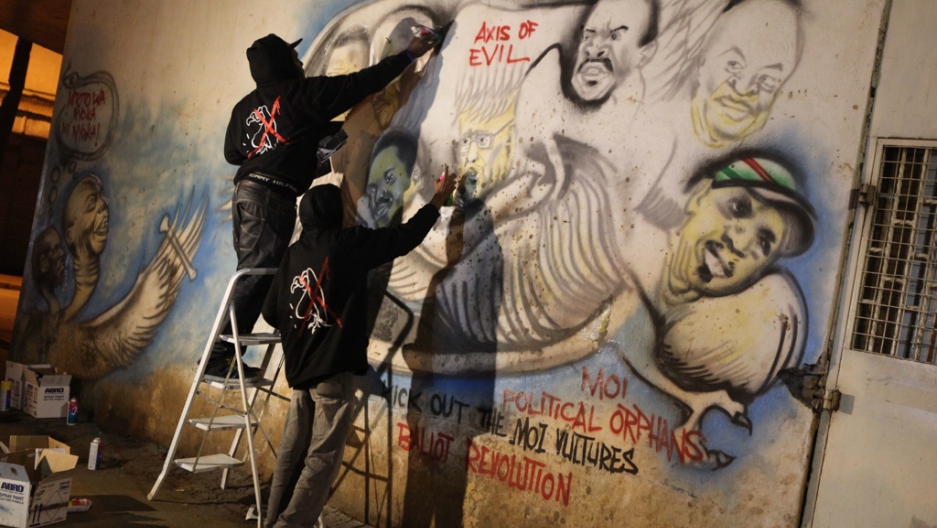 His implacable anger is aimed at political leaders who, he says, have dragged Kenya down, ransacked it and cast its people into an abyss of poverty and tribal murder.

In late 2007, as Kenya erupted in political violence, Mwangi, now 28, was a news photographer dodging bullets, flames and machetes to capture the effect of the attacks and killings on everyday people sucked into the maelstrom. His work won awards and formed part of a powerful exhibition and book titled “Kenya Burning.”

More than 1,100 people died and over 300,000 were forced to flee their homes during two months of political and ethnic violence. At the end of it all a power-sharing coalition government was stitched together, the militias laid down their weapons and families buried their dead. No one was prosecuted.

Life went on but for Mwangi everything had changed.

“After covering the violence I was sent to cover the politicians and every time I saw them I would get upset,” he explains of his decision to swap photojournalism for what he terms “photo-activism.”

“We all know what the problem is, we all know who is corrupt. What are we doing about it? Nothing,” he says. Mwangi felt photography couldn’t capture the complexity of Kenya’s nexus of corruption, tribalism and impunity in a way that would spur people to take responsibility for choosing their own leaders. He decided that graffiti could.

More from GlobalPost: What's cooking? Kenya's cool stove steps away from the heat

“We know these things and we’re going to put it on the walls, the streets, the pavements, so the truth is out there, it’s no longer hidden,” he says.

The first mural was painted on February 28 this year, the fourth anniversary of the setting up of the coalition government. It depicted anonymous Kenyan parliamentarians as vultures preying on the people. “MPs screwing Kenya since 1963” reads one of the slogans.

The latest one went up just before 2:00 a.m. on a Thursday morning in June when Mwangi’s crew of graffiti artists set to work.

A string of little traffic cones blocked off Firestation Lane, a narrow road on the rough fringes of downtown Nairobi. A mini-projector fixed to a tripod shone the outline of a sketch onto the dirty white wall of Smart Choice Supplies. Five men in black hoodies stepped up, spray cans in hand.

It took them two hours to complete the mural depicting the bigwigs of Kenyan politics, past and present, the contemporary players painted as ravenous naked baby vultures reaching out from a nest to their forebears, Jomo Kenyatta and Daniel Arap Moi.

“Mtoto Wa Nyoka Ni Nyoka” read one of the Swahili slogans: The child of a snake is a snake.

“Graffiti is stunning,” says one of the artists who goes by the name Bankslave. “One evening you see that wall, it is plain, blank. And when you wake up in the morning you’re being hit by something that is going to speak to your soul in some way.”

The vulture is the motif of their protest art. “The vulture feeds on the dead. It’s a scavenger, so it’s the best animal to describe these people who feed on the poor, the dying. They have no compassion,” says Bankslave.

At 28, he is a trailblazer in Nairobi’s thriving underground graffiti scene and cuts a distinctive figure with his broad shoulders and thick dreadlocks. He and Swift, a slim-built, soft-voiced 27-year-old, worked together on early drafts of the mural, but it is Bankslave who applies the finishing touches: shading and flicking sprays of paint to bring the caricatures to life.

When they’re done there is no doubting who is depicted. Kenyatta and Moi are a two-headed vulture reaching, in a nod to Michelangelo’s “Creation of Adam,” toward a nest in which the current president, Mwai Kibaki, as well as political heavyweights Uhuru Kenyatta, Kalonzo Musyoka, Musalia Mudavadi, Raila Odinga, William Ruto and the late George Saitoti all jostle for space and attentions.

They are the “Moi political orphans,” says Mwangi. “All the men in power today were in the former regimes. The system is still the same. It’s the same guys, reading from the same book: Impunity 101. Corruption is the order of the day.”

“We want to tell people that these politicians are the ones responsible for the suffering and the problems,” says Swift.

Challenging Kenya’s entrenched corruption means challenging its political elites, something that is not without consequences. Mwangi has been arrested once already. The rest of his crew choose to remain anonymous but Mwangi expects to be arrested again, harassed or worse but refuses to be deterred.

“This country deserves change. We’re talking about corruption, impunity, political assassinations, we want to name names and give people the courage to speak about it,” he says.

“I’m a father. I have three kids and if we don’t do this for our kids they will be forced to do it for themselves. I do it for selfish reasons: I care about my kids and I care about my country.”
More from GlobalPost: Economic growth pulls Rwandans from poverty