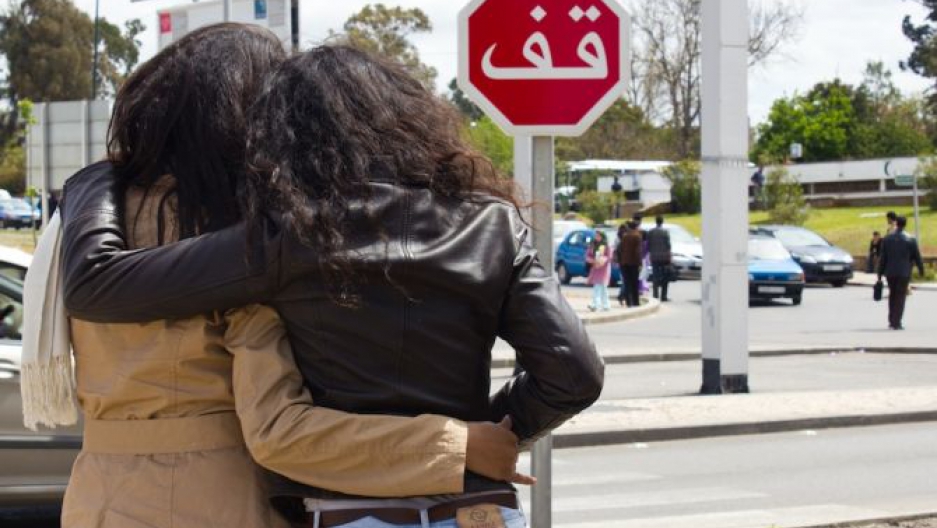 In Morocco, coming out is a choice that could destroy lives. Typical social behavior for women includes close physical contact, as pictured above, but gay women often must leave to start again elsewhere or stay and live in silence.
Credit: Marie von Hafften
Share

RABAT, Morocco – In Morocco, often considered one of the most liberal Muslim countries, affection between women is common. Girls loop arms, stroll hand-in-hand and sit cuddled together. But when this affection becomes romantic and women want to live openly as lesbians, Morocco’s acceptance abruptly stops.

“Lesbianism is not a good thing. Our God does not allow us to do something like this. It is haram,” said Hasnae Krimi, 22, a linguistics student at Rabat’s Mohammed V University, who believes that sickness and natural disasters are increasing as a warning to reject homosexuality. Most people in this Islamic country respond in similar fashion: Homosexuality is haram, prohibited by God.

Even after the Arab Spring, as demands for democracy and human rights ripple through North Africa, homosexuality is still an island unchanged, officially illegal and too taboo to be discussed openly. Moroccan author Abdellah Taïa, who has written a new book about growing up gay in the Arab world, lives in Paris for fear of reprisal in the country of his birth.

Under Moroccan law, committing “lewd or unnatural acts with an individual of the same sex” is punishable by six months to three years in prison and a fine ranging from 120 to 1,000 dirhams (about 14 to 117 USD). Algeria and Tunisia have similar bans. There have been no reports of women arrested in violation of these laws in Morocco, perhaps because experts say it’s rare for a lesbian to be open about her sexual orientation.

Moroccans Sarah and Maria, both 20, have been a couple for more than a year. Both asked that their last names not be used because of the stigma and legal implications attached to being a lesbian in Morocco. Though Sarah now attends a university in France and Maria is studying fine arts in Casablanca, they spend time together whenever they can.

Maria says she’s known she was a lesbian since she was 12 years old, but Sarah struggled when she began having feelings for Maria. “I wasn’t ready to understand how you can love someone that has the same gender,” she said. Now Sarah confidently pronounces, “I am lesbian.”

Sarah and Maria met online. A mutual friend teased Sarah about not knowing Maria because Maria lives in Casablanca where Sarah has many friends. Sarah added Maria on Facebook, planning to delete her later. Instead the women began messaging each other. To meet in person, Sarah flew secretly to Tunisia where Maria was studying abroad, telling her parents she spent the weekend studying with friends.

Neither woman’s family knows of her sexual orientation, but Sarah and Maria did tell some friends and colleagues they are lesbians — and lost friends as a result. Sarah said her ex-boyfriend physically attacked her in the street three times in one week because he was ashamed that she dated a woman after him. “We cannot rely on the police,” Sarah said, adding that if she reported the attacks, her former boyfriend “could tell the police that we are lesbians.”

Behind the law against homosexuality is religion, said Dr. Abdessamad Dialmy, a professor of gender studies at the Rabat’s Mohammed V University and one of the leading researchers of sexuality in Morocco. “For the majority of Moroccans, homosexuality is a sin because it is rejected by Islam,” he said. “If you have sex outside marriage, it is less condemnable than sex among the same sex. The first one is only a sin, not abnormal. Homosexuality is seen as a sin and abnormal.”

Moroccans grow up with strong attitudes about gender roles. “Like we say in Arabic, I need a back to stand on. [As a woman], I’m weak,” Krimi said seriously. “I need someone to support me, not someone who is just like me. If I am with a girl, I don’t think it will work.”

The societal pressure to get married, Dialmy said, is extreme. Marriage is often the central life event for men and women. “It is not a choice,” he said, adding that homosexual women often end up marrying men, sometimes gay men, and keep their true feelings suppressed or secret.

Sarah said she has come across women on the online forum LGBT Maroc asking for advice on how to become heterosexual. She knows others who gave up their religion because “so many people tell them they cannot be both gay and a Muslim,” Sarah said sadly.

Sarah and Maria believe that being Muslim and being lesbian are not mutually exclusive. “I think that it is a question of interpretation,” Sarah said. “For us, love has no sex. There is no limit to love in our religion. For us, there is no limit for love.”

Nothing in the Qur’an offers any help. There are verses that condemn male homosexuality, fornication and adultery but nothing in Islam’s main text addresses lesbianism, said Dialmy. There is a hadith (a saying of the Prophet Mohammed) that condemns sexual acts between women, though it’s debated as to whether the Prophet really said this.

“We are the concrete example that we can be lesbian and Muslim at the same time,” wrote Sarah and Maria in a follow-up email. “We pray, we fast during the Ramadan month, and so on. We don’t have different beliefs from other Muslims; we just have the beliefs that every Muslim should have: what we read in the Qur’an and not what we imagine.”

Despite the pressures on lesbians in Morocco, there are signs that things might be changing. Sarah points to a growing community of support. True, it exists largely online, but internet forums such as LGBT Maroc and Lesbiennes du Maroc may help individuals feel they are not alone.

Perhaps more significantly, the government unofficially tolerates Kif-Kif, the only organization advocating for LGBT rights in Morocco. Kif-Kif’s main office sits across the border in Madrid, and its visibility is limited to low-profile conferences and Mithly, a new publication, distributed quietly, that features LGBT voices. Established six years ago, Kif-Kif has sought unsuccessfully to become a legal association in Morocco.

Still, worldwide consideration of gay rights and the increase of media with lesbian characters may be inspiring some societal acceptance in Morocco, especially among affluent young people.

More from GlobalPost: Gay Palestinians caught in the middle of the conflict

“That’s okay, for me, lesbianism. It’s freedom, it’s part of being human, to choose what they want,” said Abdelaziz Liasse, 24, a psychology student at Mohammed V University in Rabat. He advocates for what he calls “smooth lesbianism” — being secretive about one’s sexual orientation. “It is a fact that it is existing, but we cannot admit the existence of lesbianism [in Morocco’s Islamic society],” Liasse said. Openness would create what he calls an “explosion” of chaos in a society that does not accept homosexuality.

A “don’t ask, don’t tell” mentality appears to be growing. Meryem, 28, who also asked that her last name not be used, dated another woman for two years. She never discussed the relationship with her parents, but they seemed to know anyway.

“They’re more or less open-minded, so I used to tell them about my boyfriends,” she said. “At a certain time I stopped talking about men and they didn’t ask for the reason because I think that they understood.” Meryem’s parents never brought up her sexual orientation. “They prefer hiding the reality even from themselves,” she said.

Zineb, 22, who also preferred not to give her last name, is a linguistics student in Mohammed V University. She experimented herself, kissing a girl when she was 16 years old. She knows other women who did the same thing, whether out of attraction or curiosity. “I have some bisexual friends, or at least friends who have tried kissing girls. They are curious to experience a new thing. [And] some girls are attracted to girls so they want to kiss them — not just for experience!”

Zineb is convinced that most lesbian and bisexual women eventually marry men. “It’s easier and you are more accepted by society,” she said. “If you want to go out of your parent’s house, you have to marry.” She doesn’t believe that gay marriage will ever be legal in her country.

It is a reality Sarah and Maria live with every day. “Sometimes we have to forget our professional dreams for our private dreams,” Sarah said. “We want to have a communications agency in Morocco, but if we want to live together and feel safe, to marry, to have children, and so on, we cannot live here. We don’t really know what we will do.”

“We are watching the American movies and series like “The L Word,” and we are just dreaming to have this life, but we can’t,” Sarah continued. “We just want to be free and safe. Maybe we will live in a country where there is the possibility to be together. I want to live here, but I have no security. I have to live in another country, not my country. I am Moroccan, but I cannot live in Morocco.”