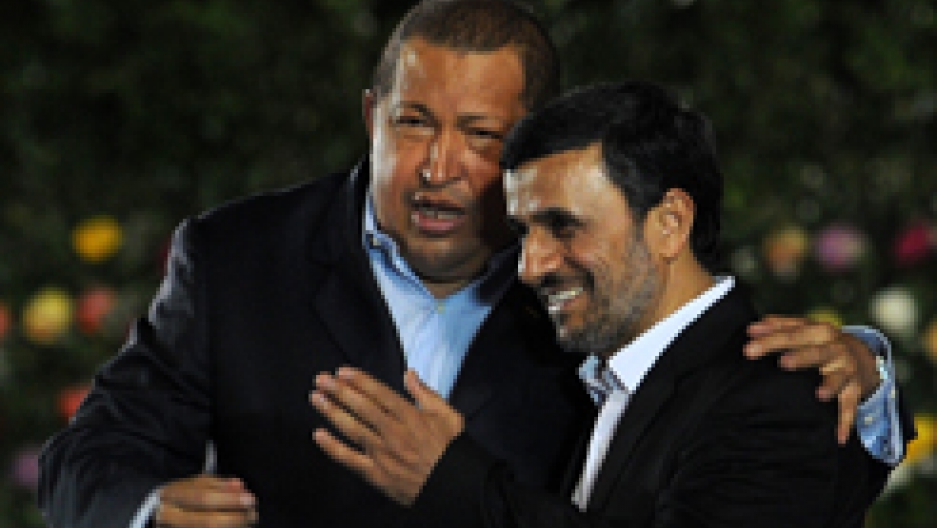 CARACAS, Venezuela — Just a week after the Venezuelan president acknowledged that the country was building unmanned drones in cooperation with Iran, Hugo Chavez is expecting this weekend to play host to his Iranian counterpart Mahmoud Ahmadinejad at his Miraflores presidential palace in Caracas.

The pair have spent their entire tenures provoking Washington. The latest news will exacerbate already tense relations. Indeed, last time Ahmadinejad was at the palace, in January, they joked about building a nuclear weapon.

“Ahmadinejad and I are going into the … basement now to set our sights on Washington and launch cannons and missiles,” Chavez said in January, pricking up the ears of many Western diplomats.

The United States has taken the threat a little more seriously. A year ago, it slapped sanctions on Venezuelan state oil company PDVSA, due to its ongoing trade with Iran. “We’ll sell oil to whomever we want to. We don’t need money from gringos,” retorted Venezuelan Oil Minister Rafael Ramirez.

In January, Iran threatened to shut the Strait of Hormuz, the choke point for one-fifth of the world’s oil.

More from Venezuela: Why the big mausoleum, Mr Chavez?

Speaking on state television last week, Chavez said that the drones were designed solely for defense and would only be armed with cameras. “We have the right [to do this],” the maverick president said, according to Reuters. “We are a free and independent country.”

Ahmadinejad will be touching down in Caracas on his return journey from this week’s Rio+20 summit in Brazil, a United Nations conference on sustainable development. That conference took place 20 years after the 1992 Earth Summit.

Ahmadinjad’s language at the conference was reminiscent of that of Chavez in his own anti-Western vitriol. According to Iranian state news agency IRNA, the Iranian president told UN Secretary-General Ban Ki Moon: “The arrogant and domineering powers must stop their enmity towards Iran and the other freedom-loving, justice-seeking nations because today global conditions are such that cooperation between nations is much better and more appropriate than creating enmity and divisions.”

Venezuela’s links with Iran are worth more than five times as much, with factories across the country extolling the economic ties. Chavez has signed more than 100 bilateral deals between the two nations.

In welcoming the pariah, Chavez will also be playing to a domestic audience, as he kicks off his campaign for Venezuela’s October presidential election in earnest. Chavez is hoping to bounce back after months of cancer treatment. He's also battling opposition leader Henrique Capriles Radonski who, despite trailing 16 percentage points behind Chavez in the latest polls, is still confident of a win. “The balance is tipping in our favor,” Capriles’ campaign manager Ramando Briquet told Reuters. “We are going to win.”

According to the latest polls, around a third of Venezuelan voters are undecided — meaning there is much to play for.

“Chavez is trying to show internally that he's still alive politically and internationally,” said Roberto Briceno-Leon, a professor at the Central University of Venezuela in Caracas and a fellow at the Woodrow Wilson International Center for Scholars in Washington, D.C.

Chavez has a knack for keeping odd company.

The Venezuelan strongman had described the late, deposed Libyan leader Muammar Gaddafi as the “liberator of Libya” and that NATO’s bombing was designed solely to “seize a country and its riches.”

"It's incredbile that even in his worst moments, Chavez continued to support Gaddafi. He continues these kinds of international relationships because he required oxygen from outside for his internal politics," said Briceno-Leon.

In February, it was revealed that Chavez is not only supporting Syrian President Bashar al-Assad with rhetoric, but also supplying diesel to Syria, while the military there cracks down on unrest. The response was the same as always. “We are a free country,” said Chavez, before adding that the same “formula” used against Libya was now in action against Syria.

“These relationships aren't based on national interest or trade or even economics, they are based entirely on a ruler's need to share best authoritarian practices, engage in mutual defense in the war of words at international bodies, provide needed camaraderie in the face of existential threats, and outfit every imaginable disruptive rebel group or terrorist organization," said Thor Halvorssen, president of the Human Rights Foundation, a New York-based rights advocacy group.