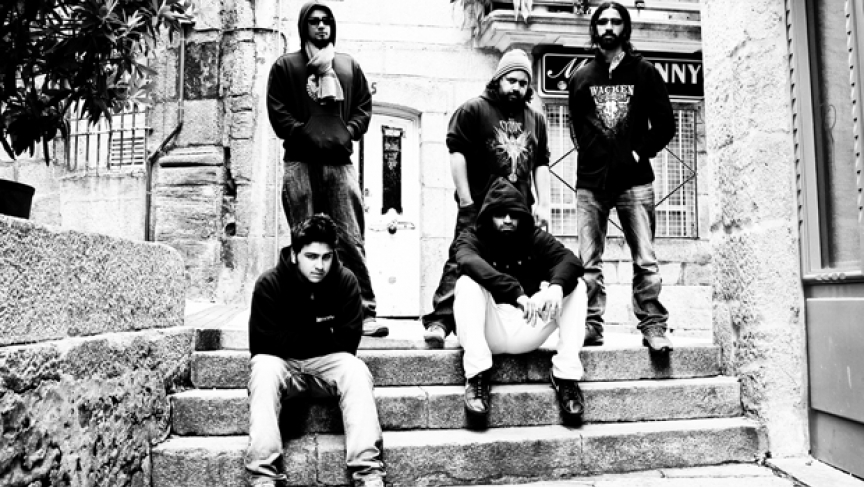 To find Eccentric Pendulum in their natural habitat, take an auto-rickshaw to the posh, traffic-choked neighborhood of Koramangla. Turn right at the Taco Bell and stop in front of the glass-encased office building across from the Baskin Robbins. Follow the rumble into the tiny studio-for-rent where the band practices. Then push open the sound-proof door.

Inside, the band tears through its own form of progressive metal, full of tricky time signatures and driving modal riffs.

Vibhas Venkatram is the drummer. He has got a tidy ponytail and sculpted goatee. He and the rest of the band are still on a high from playing Bangalore’s first outdoor metal festival. Even the monsoon rains didn’t dampen the crowd’s spirits.

“It started pouring when we were on stage,” he says, “and we thought everyone would just go stand somewhere, but they stayed where they are. They were getting drenched, and they were cheering us. They were having a ball.”

Eccentric Pendulum got hooked on Western music through MTV. They were all fans of the Backstreet Boys. But when they were around 13, kids at school started passing around heavy metal tapes from the US. Venkatram heard Iron Maiden and Metallica for the first time.

“It is completely different from listening to Backstreet Boys tape or an Abba tape,” he says. “The distorted guitars and aggression really caught my eye.”

But he and the others couldn’t understand the words. And they couldn’t connect with the head banger culture. “The way American kids are portrayed, being rebellious and all, I don’t think that happens here,” he says. “They don’t know what to rebel against.”

Case in point. Like most Indian 20-somethings, the members of Eccentric Pendulum still live with their parents. Aside from the long hair, they dress more like yuppies than rockers. Because they are. The band includes an architect, a physicist, a computer animator. Singer Nikhil Vastaray is a software engineer. “Most of the people that can afford to buy guitars and drums, they come from good financial families,” he says.

And you can’t tell parents that you’re going to devote your life to heavy metal. “That is not accepted here,” says Vastaray.

Despite the scenes’ clean cut vibe, Venkatram says the authorities have made it very difficult to play metal in Bangalore. “Mainstream Indian culture sees heavy metal as a threat, because anything western music is deemed with drugs and sex,” he says.

Quite literally. The state government, led by the Hindu-nationalist party BJP, has enforced a ban on live music at any establishment that serves alcohol on the grounds that rock and roll encourages prostitution.

“So maybe they’re trying to ban these things so the Indian element to be restored,” he says. “But it is pretty pointless, if there is a generation gap, it is meant for culture to change.”

Eccentric Pendulum has only had two gigs this year. They can still play festivals that don’t serve alcohol. But last month the state government banned all concerts at the Palace Grounds right in the city, where Bangalore Open Air was going to be held. The rationale was the concerts caused too much traffic.

So the metal festival was moved to a college campus 15 miles outside of the city, which could take an hour or more in Bangalore traffic. And to top it off, the Indian government denied visas to the American headliner Iced Earth. Venkatram says he heard it was payback after Bollywood icon Shah Rukh Khan was detained for two hours at the Newark airport in April. “It could be the issue of some communal tension between the Indian embassy and the US authorities,” he says.

The end result is that Bangalore Open Air attracted only a couple thousand fans, less than half of what the promoters expected. Eccentric Pendulum has seen the other side. They’ve played in several major heavy metal festivals in Europe. And they dream of seeking their fortune in the West. But for now they meet a couple times a week in their soundproof studio where they can rock out in peace.

“The band is happening because we all love what we are doing in the band,” he says. “At least, if we are not able to show to others, we are doing it for ourselves. So if we can’t play live music, we will go to a studio, record ourselves and listen to it over a few drinks and be happy about what we have done.”