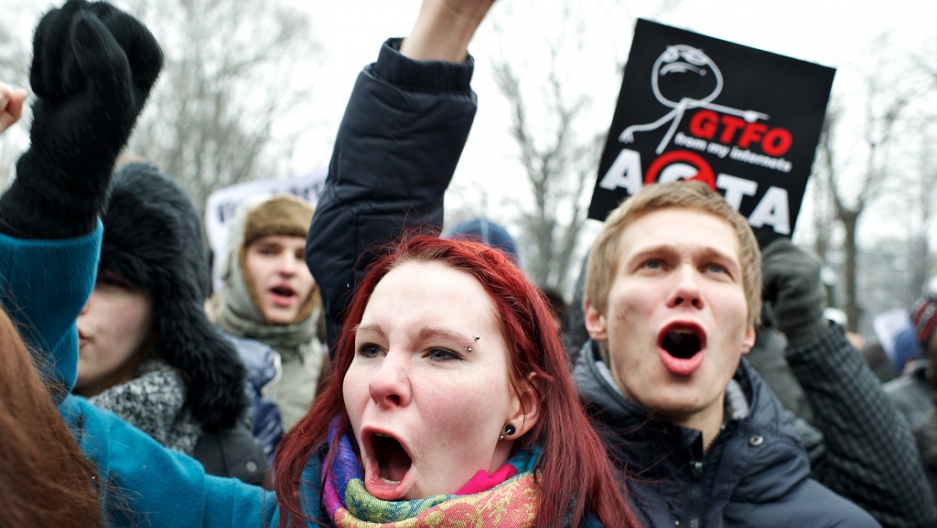 Protesters demonstrate against the controversial Anti-Counterfeiting Trade Agreement (ACTA) in Riga on February 13, 2012. Around 300 protesters, mainly young people, braved sub-zero temperatures to rally against the controversial Anti-Counterfeiting Trade Agreement outside the Baltic state's cabinet office, following weekend demonstrations across Europe. ACTA aims to beef up international standards for intellectual property protection, for example by doing more to fight counterfeit goods. But it is its role on the Internet that has fuelled anger online and on the streets.
Credit: Ilmars Znotins
Share

The social liberalism party claims that some forms of online protests are often incorrectly characterized as illegal hacks, perhaps referring to distributed denial of service (DDoS) attacks, according to Novum, a Dutch news agency. DDoS attacks use botnets and large numbers of users to focus traffic onto a website, forcing it to crash temporarily.

Kees Verhoeven, a lawmaker with Democrats 66, announced on Twitter that his party sought laws protecting both online and street protests.Verhoeven said online protests will begin happening more frequently over the next few years. At the moment, DDoS attacks are heavily penalized in the Netherlands.

Democrats 66 are hoping that a new law would allow for online protesters to apply for permits that would give advance notice of internet demonstrations.

DDoS attacks, however, often use hacking tools acquired through illegal means, such as botnets. Botnets are built by hackers breaking into large numbers of individual computers, giving them control over huge portions of bandwidth.

The political party has also called on the Dutch government to remain neutral on issues of online piracy and privacy, standing in staunch opposition to ACTA, a multinational treaty that establishes international standards for intellectual property law and copyright enforcement. So far, the US, Australia, and several other countries have adopted ACTA. But the European Union, where web freedom activists have demonstrated against the treaty for months, has yet to ratify the treaty.