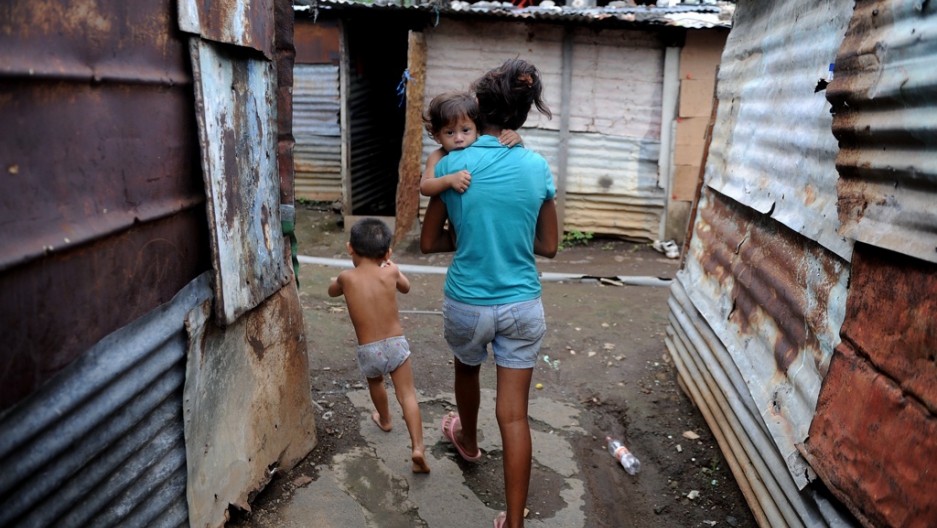 Nicaraguan Caty del Socorro walks with her brothers through their barrio in Managua. One of Latin America's poorest countries, Nicaragua would be devastated if all foreign aid and loans were to dry up.
Credit: Elmer Martinez
Share

Editor’s note: This is the first article in the in-depth series, “Nicaragua Rewind,” a look at whether Nicaragua is repeating its troubled past under the second coming of Sandinista President Daniel Ortega. It is presented in partnership with the Pulitzer Center on Crisis Reporting.

MANAGUA, Nicaragua — President Daniel Ortega’s wobbly balancing act between Venezuela and the United States has become precarious after a US decision this week to cut bilateral aid to Nicaragua.

The US Embassy in Managua announced on Thursday the suspension of State Department and USAID money to the Nicaraguan government. The $3 million aid cut comes in response to the Sandinistas’ dubious handling of Venezuelan petro dollars and significant complaints of official mischief in the 2011 election process.

In January, US Secretary of State Hillary Clinton called it “a setback to democracy” after Ortega sidestepped Nicaragua’s Constitution, allowing himself to be re-elected.

Slashing government aid sets the stage for a much bigger decision next month, when Washington will determine whether to continue supporting Nicaragua in multilateral lenders. That’s considered crucial to the future of US-Nicaragua relations and the economic viability of the hemisphere’s second-poorest country.

Bilateral aid had come to Nicaragua thanks to a policy known as a fiscal transparency waiver, meaning US funds are contingent on the Central American government's disclosure of revenue and spending. Washington votes once a year on whether to pass the waiver. This is the first time it has been struck down.

US support in multilateral institutions comes from what’s called a property waiver, which makes support conditional on the country’s progress resolving pending claims by US citizens who had their properties confiscated by the Sandinista government in the 1980s.

Canceling the property waiver would jeopardize $1.4 billion in approved development loans over the next five years.

The one-two waivers whack by the United States wouldn’t be quite as devastating as the trade embargo imposed on the Sandinista government in the 1980s, but Nicaraguan business leaders say it would feel like “an atomic bomb” had been dropped on the country’s recently budding economy.

Though previous aid reductions from the US and half a dozen European countries have been underwritten by Venezuela’s oil-rich president, even Hugo Chavez would have a hard time cutting a check to cover $1.4 billion.

In strict monetary terms, canceling the transparency waiver is more like a distant (and perhaps unheard) warning shot than a direct hit. The amount of aid the US is cutting — a paltry $3 million — is equivalent to what Ortega gets every two days from Chavez, who provided his Sandinista comrade with $557 million in 2011 and more than $2 billion over the past five years. Venezuelan aid is managed privately by Ortega in a parallel economy that operates under the auspices of Chavez’s Bolivarian Alliance for Our Americas (ALBA) — hence the transparency troubles.

The US, meanwhile, has been trimming economic assistance to Nicaragua for years. In June 2009, Washington slashed $64 million in Millennium Challenge funding after the Sandinistas were accused of stealing 40 polls in the 2008 municipal elections. Five and a half years after Ortega’s return to power in 2007, US aid for Nicaragua has been whittled to about $30 million. About 10 percent of that goes toward funding a government HIV program and to military training that Nicaragua stopped sending its officers to in 2010.

The other $27 million goes to Nicaraguan civil society groups, which will not be affected by the transparency waiver cut, nor will several million dollars worth of drug-war operational assistance channeled through the US Department of Defense.

More from Nicaragua: Where leftists get religious over free trade

The possible loss of the property waiver, however, would be a much more serious blow to the country.

The property waiver prohibits US economic assistance or support in international financial institutions to any country where US citizens have not received compensation for confiscated property.

For the past 18 years, the government of Nicaragua has compensated 1,864 US citizens a total of $433 million for properties confiscated in the 1980s. So far this year, the Sandinista government has resolved more than 50 cases and is on track to reach last year’s record of 62. Officials hope that accomplishment will ensure an extension of the transparency waiver next month.

If the US decides to suspend the property waiver anyway — something Republican congressional leaders are pushing for — it would be the metaphoric bomb that business leaders are worried about. Nicaragua would stand to lose vital budget and development funding from the Inter-American Development Bank, the World Bank and other multilateral lending institutions in which the US has a strong voice and vote.

Analysts say that suspending the property waiver would punish Nicaragua’s poor and radicalize its president — a man who once played the role of Ronald Reagan’s tropically mustachioed Cold War nemesis in the 1980s.

Ortega has won rare praise for being more pragmatic and productive in his second go-round as president (despite his penchant for hackneyed revolutionary boilerplate). But forcing Ortega back into a corner, the Sandinista leader could fall further into the dying embrace of Chavez. He also could get pushed into the grinning clutch of Iran’s Mahmoud Ahmadinejad, who recently offered Ortega a $250 million development loan for mysterious purposes.

“American authorities aren’t going to make Nicaragua more democratic by impoverishing the country even more,” said Jose Adan Aguerri, president of Nicaragua’s largest federation of business chambers. “It’s not the Nicaraguan government that is going to be the big loser from the loss of the waivers.”

Nicaraguan businessman Cesar Zamora, vice president of the Association of American Chambers of Commerce in Latin America, said the suspension of the second waiver would be devastating to the country’s internal twitchings for democracy.

“We have the capacity to resolve our own institutional issues, but it’s going to take some time,” Zamora said. “In the meantime, the US can’t drop a nuclear bomb on Nicaragua and say, ‘You pick up the pieces and then you’ll win back the support from US government.’”

Unfortunately for Nicaragua, the fate of the property waiver will be decided in context of a heated presidential campaign in the United States. What’s best for Nicaraguan democracy — a riddle that no one seems to have been able to solve during the country's 191 years in existence — isn’t exactly a top concern for anyone in Washington these days.

“Just a few months before a critical and tight presidential election, the Obama campaign team wants to make sure it is not vulnerable on foreign policy, including on Latin America,” said Michael Shifter, president of the Inter-American Dialogue, a think-tank in Washington. “It will want to show that it has been tough on anti-American leaders like Ortega. So for political cover, the administration may want to cancel both waivers to shield itself from the critique of the Romney campaign.”

Others think the US government might be more hesitant to play its last diplomatic card. Once the property waiver is suspended, the US would essentially lose any remaining leverage — real or perceived — over Ortega, making it very difficult for the remaining 193 US claimants to receive compensation for their properties confiscated by the Sandinistas in the 1980s.

Then again, Washington’s bipartisan exasperation with Ortega may have reached the point where US politicians are ready to pull the plug and walk away.

“It’s is an election year, Ortega has announced he’s going to Tehran, he’s now stolen two elections, and his rhetoric is as heated and inane as always, so maybe those considerations will predominate,” a recently retired US diplomat, who was last posted in Managua, said.

Business leaders, however, hope the cancellation of the first waiver doesn’t mean the fight for the second is already a lost cause.

“The battle is for the property waiver,” Zamora said. “The possibility of saving the second waiver represents an opportunity that we can’t afford to lose.”