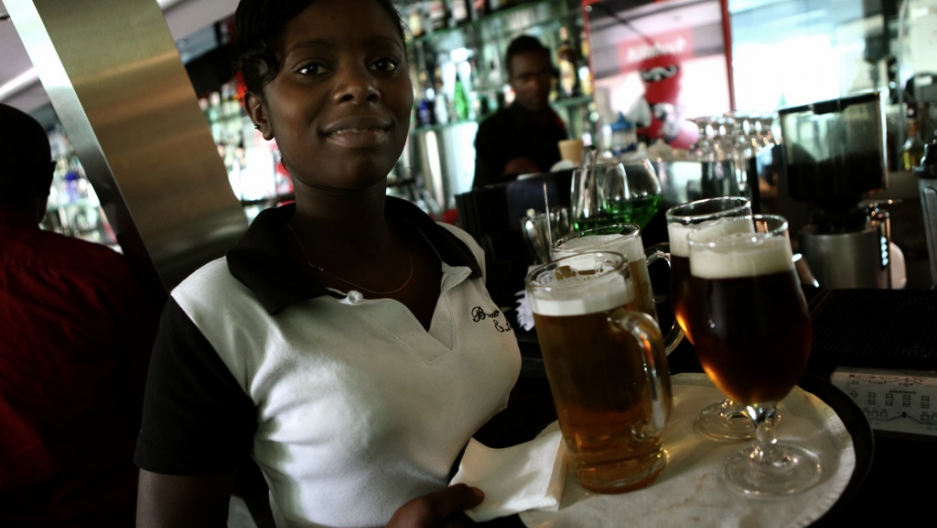 JINJA, Uganda — Waiting for his bicycle to be repaired, Phillip Kagona, is looking forward to the end of the day when he will have a beer.

“Every evening after work I go for two bottles, at least,” said Kagoma, a local farmer. “But if I get someone who can sponsor me I can even finish eight or up to 10.”

He and many others go to the bar stalls at a market near global brewing giant SABMiller’s plant in Uganda. Many of the open shop fronts are painted with colorful advertisements for the company’s Eagle, the top selling beer in Uganda.

Kagona, a local farmer, is not only a customer of SABMiller, but a supplier. “I prefer (Eagle) because it comes from the sorghum which we grow here,” he says.

SABMIller’s Eagle Lager and Eagle Lager Extra are the first commercial clear beers to be made in Africa with local sorghum grain, instead of imported hops. It is called clear beer, differentiating it from the sour, intoxicating opaque beer usually made with local grains.

The use of local grains to produce a bottled, clear beer is part of the strategy to make cheaper beer and boost sales in Africa by SABMiller, the company formed in 2002, when South African Breweries bought Miller to become the world’s second largest brewer.

SABMiller’s Africa venture is helping to offset stagnant and even negative growth in Europe and North America. While the company’s earnings in the 12 months previous to March 31 were down 9 percent in Europe, net revenue in Africa was up a booming 16 percent for the same period.

Building on this success, the company, the maker of Miller Lite and Castle, announced in March that it would invest $2.5 billion in Africa over the next five years. SABMiller has operations in 16 African countries and, through its partnership with Castel, stakes in 19 more.

“The First World markets are fairly mature as far as beer is concerned and there is a lot of competition from other beverages,” said SABMiller’s Africa technical director, Gerry van den Houten. “There is a lot of growth potential in markets that, from a beer perspective, are untapped at the moment.”

The annual per capita consumption of clear beer in Uganda is eight liters, according to the market research firm Canadean. That might seem small, but it hides a much greater demand for alcohol in the country. About 94 percent of alcohol consumed in the country is home-brew, according to the World Health Organization. It’s cheaper, but also dangerous. There are frequent reports of drinkers dying from bad batches of homemade alcohol, so SABMiller’s Eagle brands offer consumers a safer alcoholic alternative.

The company first started brewing beer with sorghum in Uganda in 2002 after negotiating a tax incentive from the government to use locally grown raw materials in its drinks.

Commercial beer is seen as a luxury product in Africa, and consumers are eager to trade up as they gain more income. But even when sold for as low as $1 a bottle, most clear beers are still out of the reach of the majority of Ugandans. Eagle Lager and Eagle Lager extra sell for the equivalent of $0.72 and $0.60.

SABMiller’s Eagle brands also provide a market for the produce of small-holder farmers. Last year it purchased $3.5 million worth of sorghum from Uganda farmers. Kagona, the local farmer, says he earned $280 from selling his produce to the brewery last year, enough to send his children to school.

“If you can put that beer on the market at a 25 percent to 30 percent cheaper price from your mainstream beer, you will generate significant volumes, because you are then able to access consumers who would otherwise be drinking home-brewed, home-distilled products,” said Nick Jenkinson, the managing director of SAB Miller’s subsidiary in Uganda, Nile Breweries.

Since producing its first sorghum beer in Uganda 10 years ago, the company has rolled out similar beers using local grains across the African continent. Recently it announced that it will begin brewing Impala, a cassava-based beer, in Mozambique.

Conveyer belts of bottles zigzag around the Nile Breweries plant in Uganda, which smells of the sticky sweetness of beer. Eagle beers are selling so well that SABMiller has started to build a new $86 million brewery in western Uganda, to be opened in 2013. It will have a capacity of 5.5 million crates of beer per year to meet the rapid growth in beer sales. Volumes have been growing in Uganda at a rate of around 20 percent per year in the past few years, according to Jenkinson.

SAB Miller is hoping the rest of Africa proves just as thirsty.