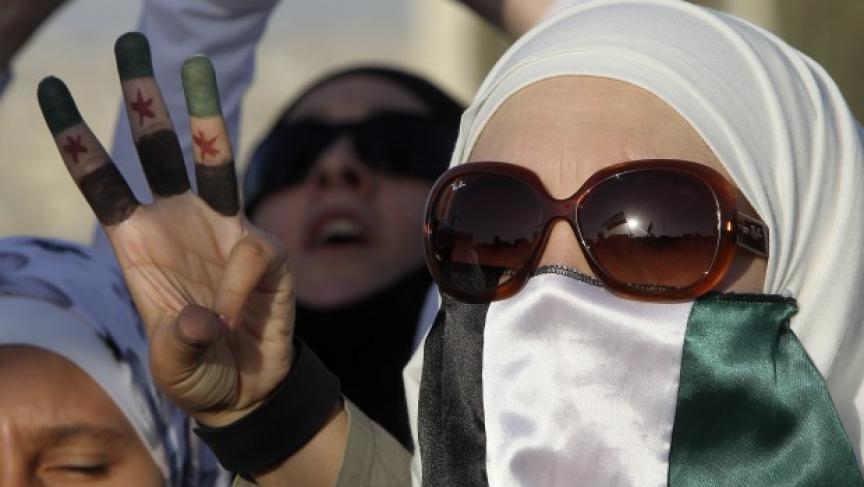 People shout slogans in support of Colonel Hassan Hamada, a Syrian air force pilot who flew his MiG-21 fighter plane over the border to Jordan on Thursday, during a demonstration against Syria's President Bashar al-Assad outside the Syrian embassy in Amman June 21, 2012. Hamada was granted political asylum in Jordan on Thursday, the first defection with a military aircraft since the start of the uprising against al-Assad. REUTERS/Ali Jarekji (JORDAN - Tags: POLITICS CIVIL UNREST)

Share
A Syrian fighter plane has landed at a military air base in the north of Jordan and the pilot has been granted political asylum, officials say. The defection of the MiG-21 pilot is the first involving the air force. Syria has condemned the pilot as a traitor, and has asked the Jordanian government for the return of its plane. Marco Werman speaks with the BBC's Jim Muir about the pilot and conflicting stories about how he ended up in Jordan. Jim Muir — analysis The defection of the Syrian air force pilot with his MiG-21 is obviously a public embarrassment to the authorities in Damascus. It shows, at least in this instance, dissidence has penetrated into the heart of one of the regime's key pillars of support. Its founder, Hafez al-Assad, was himself an air force pilot before he rose to leadership through the Baath Party and seized power in a "corrective movement" in 1970. Air force intelligence remains one of the most pervasive and, activists say, most brutal of the 17 or so security agencies which keep the country — and one another — under control. Although this is the first air force defection, it would be wrong to assume that this single incident will lead to a stampede or a collapse of the armed forces. There have been many desertions from the ground forces by individuals and small groups, but no major unit has split off so far.