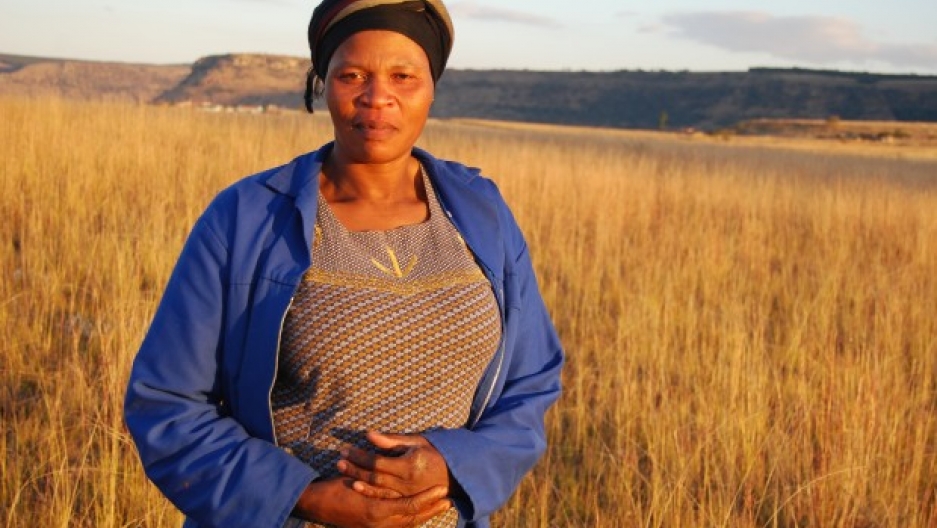 Share
In the eastern province of Kwa-Zulu Natal, Thombi Mavihlombe stands with her daughter outside a small, thatch-roof hut, a field of wild grass surrounding them. Mavihlombe lives here with her eight children, sewing and farming to make ends meet. This year, though, she hasn't been able to work much. She holds up her left hand to show why. "A local man attacked me on a bus," Mavihlombe said. "He elbowed me, grabbed my neck, and started biting me." She said the man bit her finger so badly that it became infected. "It turned green and then black. The pain was awful – it was unbearable." Eventually she had to have her finger be amputated. A few days afterwards, Mavihlombe went to a tribal court. She wanted her attacker to be punished. People in South Africa and other parts of sub-Saharan Arica have used "tribal courts" for centuries to settle civil disputes. The courts are typically made up of village elders, who play the role of jury, or a tribal chief, who acts as judge. In Mavihlombe's case, the local tribal chief refused to listen to her. "He said he wouldn't hear my case because I am a woman – a crazy woman. He would only talk to a man." Observers say it's common for tribal courts to refuse to hear women's cases. Women have to be represented by a man. But Thombi's husband lives and works nearly 200 miles away, so he couldn't speak for her. As a result, her case was never heard, and her attacker never punished. She's now lost faith in the tribal justice system. "No justice is going to come out of the tribal courts," Mavihlombe said. Although tribal courts have operated in South Africa since pre-colonial times, their role in the country's modern justice system is not well defined. So the South African government is now considering legislation that would bring the courts into alignment with modern laws; for instance, women would be given the right to represent themselves. The bill would also make tribal courts part of the modern justice system, and their rulings would be legally binding. "These courts are the original administrators of justice in South Africa," said Phathekile Holomisa, a tribal chief and the president of the Congress of Traditional Leaders of South Africa, which supports the bill. Holomisa said it's critical to preserve the indigenous court system. "Those people who say African ways of justice administration are backward, outmoded and outdated are perpetuating the program of colonialism, that Africans, to be civilized, must live according to the white man's ways," he said. "I believe that our systems in fact are superior to those of the whites." He added that "white" courts – or modern courts – feel foreign to many black South Africans. "The atmosphere there is intimidating. The language that is used is predominantly English, sometimes Afrikaans, but definitely not the African languages." But opponents say the new legislation would put too much power in the hands of rural chiefs. "It entrenches that notion of customary law that says that traditional leaders are autocrats, and ordinary people are just their subjects," according to Sindiso Mnisi-Weeks, with the University of Cape Town's Law, Race and Gender Unit. She said the bill would give chiefs the right to decide what "customary" law is. That means they could still require women to be represented by men, if that's the tradition in their area. They could even prevent women from owning land or property. Sizani Ngubane of the Rural Women's Movement, which has about 50,000 members in Kwa-Zulu Natal, said rural South African women are tired of living under the iron fist of tribal leaders. "We are working with a group of women who are saying they have never seen democracy," Ngubane said. She added that chiefs often impose taxes when they want to renovate their homes or buy a new car. Rural women — most of whom are very poor — are afraid they'll be banished if they refuse to pay. Now, they've been showing up at public hearings in huge numbers to fight the tribal courts bill. "There was resistance left and right in all the public hearings, and some of them even had more than 500 people," Ngubane said. Thombi Mavihlombe – who lost her finger in the attack on the bus – said giving tribal courts more power is a bad idea, but she's grown equally skeptical about modern courts. After the chief in her area refused to hear her case, she took it to a civil court. But that didn't work out either. "The case against my attacker was dropped by the civil court. I wasn't given an explanation," she said. Mavihlombe suspects her attacker, who is from a powerful local family, threatened or paid off the magistrate. She said it doesn't matter what kind of court you go to – modern or tribal. What matters is whether the people running it are corrupt.