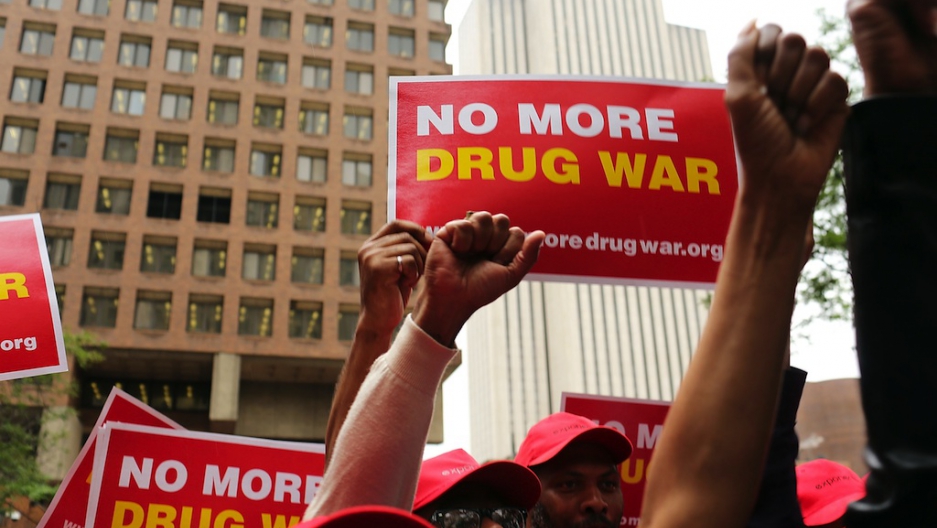 Marijuana legalization advocates and members of community groups attend a rally against marijuana arrests in front of One Police Plaza on June 13, 2012 in New York City.
Credit: Spencer Platt
Share

New York's State Senate killed a bill by Governor Andrew Cuomo that would have decriminalized the public possession of nearly an ounce of marijuana, the New York Times reported.

Governor Cuomo, a Democrat, initially proposed the bill over criticism of the New York City Police Department's "stop-and-frisk" policy, which allows officials to stop and search anyone they feel is suspicious and has lead to a disproportionate amount of arrests in the city, Reuters reported.

Out of over 50,000 low-level marijuana arrests in New York State in 2011, 9 out of 10 occurred in New York City, according to state data, the Times reported.

“You have old folks like me who say, ‘Whoa, the decriminalization of marijuana: What are you saying? Everyone is going to walk around smoking marijuana, and that’s O.K.?’ So I think the Senate got a lot of blowback, pardon the pun," Cuomo told the Times.

New York decriminalized marijuana in 1977, but while possession of less than 25 grams of marijuana is considered a non-criminal violation, having it in public is a misdemeanor, according to the Associated Press. The bill would have removed the distinction between public and private possession, a measure that has already been implemented in some of the US' largest cities, Reuters reported.

The Republican-controlled Senate's blocking of the law came as a surprise to Democrats and drug-policy advocates, who had the support of Mayor Bloomberg among other prominent officials, according to the Times.

“You have the governor of the state, the speaker of the Assembly, the mayor of the city, the police commissioner, all five D.A.’s from the city,” Harry G. Levine, a sociologist at Queens College who has studied the city’s marijuana arrest practices, told the New York Times. “It seemed like if this many powerful people said they wanted X, which wasn’t that big a deal, it should be possible to do it.”

More from GlobalPost: Moscow mistakenly plants a field marijuana in lieu of grass

Senate Majority Leader Dean Skelos told reporters earlier in June that he was not in support of the amount of marijuana allowed under the bill, saying it was too large a quantity, Reuters reported.

Cuomo said his marijuana bill was "the kind of proposal, like same-sex marriage, that would take time to persuade lawmakers to support," Gothamist reported.