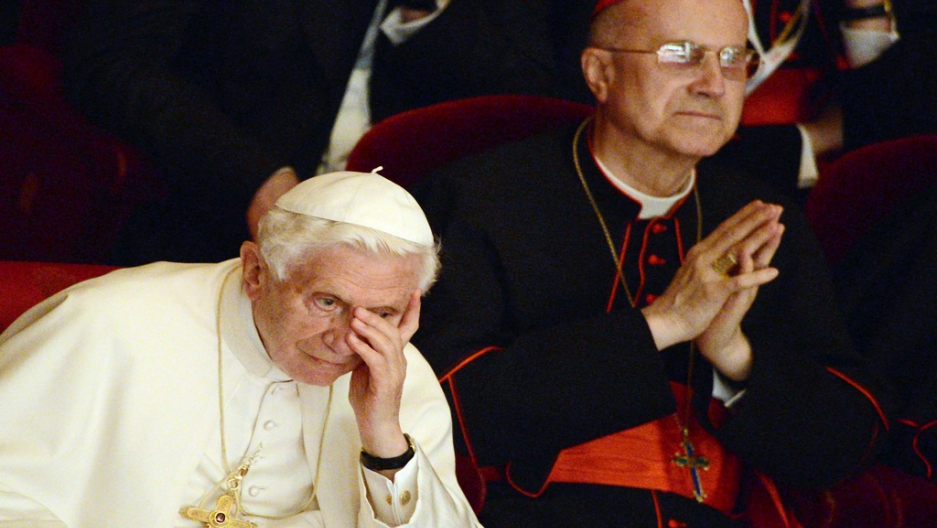 The Vatican is in the midst of an unprecedented series of scandals after the leak a huge treasure trove of suppressed documents given to a notorious investigative journalist last year.

But who leaked the "Vatileaks" and why?

The Vatican secretary of state, Cardinal Tarcisio Bertone has played down the scandals, insisting it's just the result of journalists "pretending to be Dan Brown." He also, cryptically, blamed the "devil."

But Cardinal Bertone should probably be worried — he's thought to be target of the leaks.

Journalist Gianlugi Nuzzi, notorious for a series of books about the Vatican, was reportedly vetted for months before being given the documents by an unknown source, known only as "Maria," the Daily Beast reports. Nuzzi began revealing the information in the documents in his TV show The Untouchables last year, before publishing full details in a book last month, Sua Santità — Le Carte Segrete di Benedetto XVI.

The documents themselves are 30 faxed memos from the Pope's office to other Vatican offices. Many of the documents are mundane, Der Spiegel notes, but some hint at huge scandals, which later led to further investigations and wild speculation.

Crucially, the documents appeared to show that Vatican insiders who attempted to confront corruption in the Vatican Bank were sidelined.

For example, during Archbishop Carlo Maria Vigano's tenure as deputy-governor of the Vatican city from 2009-2011, Vigano encountered and reportedly tried to put a stop to corruption, cronyism, nepotism, and the awarding of contracts to friends of officials at inflated prices.

However, when he brought evidence of these events to the attention of Pope Benedict XVI, he was removed from office.

Perhaps even more damning than the documents themselves are the scandals in Italian newspapers that have come in the wake of the Vatileaks.

Most scandalous of all was the case of Magliana mob boss Enrico De Pedis, who was reportedly buried alongside the bodies of former popes and cardinals following his death in 1990 — all for the lump sum of 1 billion lire ($660,000).

While the rumors about De Pedis had existed for years, one new note leaked from the Vatican press office suggested that De Pedis may have played a role in the disappearance of a Vatican employee's 15-year-old daughter.

Soon after that revelation, Father Gabriel Amorth, an exorcist in the Catholic Church, said he believed Emanuela Orlandi had been involved in depraved Vatican sex parties, and her remains were buried with De Pedis. Thus far, the tomb has been exhumed and investigators have found bones that do not belong to De Pedis.

Millions of Denaro's euros were reportedly laundered through Treppiedi's former parish Aclamo, the richest parish in Sicily. Denaro is still at large and is considered by many as the most wanted man in Italy.

The scandals appear to have been a huge headache for the Catholic church. For example, the Vatican Bank President Ettore Gotti Tedeschi was given a vote of no confidence in May (the Vatican says it was for leaking documents, he says it was for trying to reform the Bank. He now reportedly fears for his life).

Last month, following a lengthy investigation, Vatican authorities finally arrested one man thought to be behind the leaks — the Pope's butler, Paolo Gabriele.

While the arrest was to the delight of headline writers around the world, there's a significant amount of people who don't buy it. The theory is that Gabriele could never had access to some of the documents, and others (possibly high ranking cardinals) must have been behind the leak. Journalist Nuzzi has refused to say anything about the person who gave him the Vatileaks documents.

Regardless, the leaks appear to have prompted official reactions from other entities. For the first time ever, the International Narcotics Control Strategy Report said the Vatican city as an area "of concern" when it comes to money laundering, and the Milan branch of JPMorgan Chase closed the Vatican bank account at the end of March, citing a lack of transparency and insufficient information concerning money transfers.

Curiously, Nuzzi himself has told Der Spiegel that the target isn't the pope himself, instead arguing that Benedict XVI is revolutionary, and clearly wants to bring transparency to the Vatican bank.

What the leaks really show, he said, is his weakness of his leadership. Many note that the target of attacks seems to be the second most important person in the Vatican — the secretary of state, Tarcisio Bertone, who has been accused of cronyism and refusing to deal with corruption, Reuters reports.

Bertone is of course the man who would like to blame the scandal on "the devil," but he's also the head of the opaque and archaic Vatican bureaucracy, the Curia, which is dominated by Italian clerics such as Bertone and can effectively overrule the pope. Benedict XVI had planned to reform the church, but instead found himself under its power, despite a growing backlash.

Whatever the reason behind the leaks, the scandal has shown the incredible level of infighting inside the secretive headquarters of the Catholic Church.

Exactly how brutal that infighting will be remains to be seen ... In February, a letter was sent to the highest Vatican officials a potential plot to kill Benedict XVI.

Business Insider: The Most Powerful Newspaper in the World

Business Insider: Israel is Lining Up Tanks Along the Egyptian Border