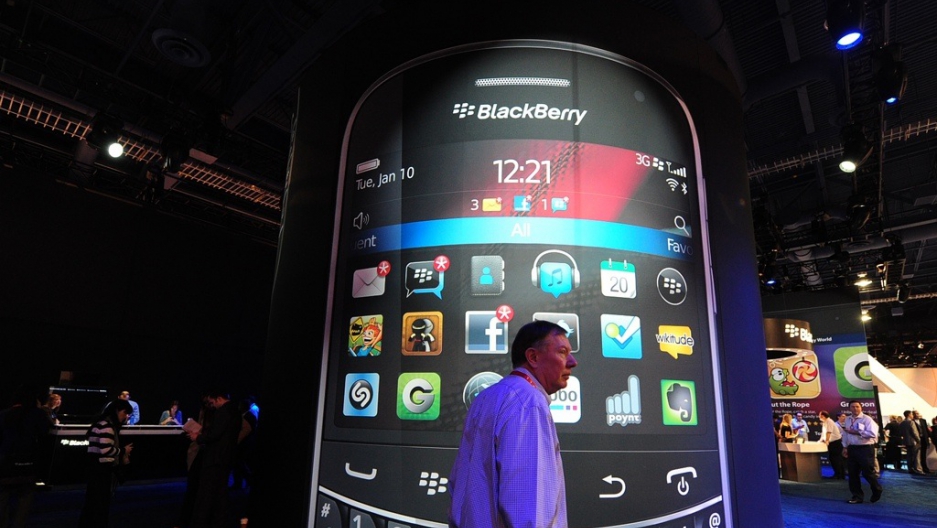 A man walks past a BlackBerry display at the International Consumer Electronics Show (CES) in Las Vegas, Nevada, on January 11, 2012. Although BlackBerry is losing market share in the US, it remains a strong brand in South Africa and Nigeria.
Credit: Frederic J. Brown
Share

While the once-ubiquitous BlackBerry is rapidly losing its share of the US market, it is still a sought-after item in South Africa. In a leading newspaper’s survey of South African youth, BlackBerry was named coolest brand for a second year running, while Apple’s iPhone didn’t even make the list.

BlackBerry and its maker, the Canada-based Research in Motion, are facing tough times in their traditional markets, with plummeting stock value and massive earnings losses. But in Africa, particularly in the key markets of South Africa and Nigeria, BlackBerry’s popularity is rapidly rising.

This could be a lifeline for the company, which went from a 44 percent share of the US smartphone market in 2009 to just 10 percent in 2011, due to competition from the iPhone and Android devices, according to market researchers NPD Group.

In comparison, shipments of BlackBerrys in Africa rose by a stunning 741 percent, year-on-year, in the third quarter of 2011, research firm Canalys said.

There are more than 2.5 million BlackBerry devices in South Africa, or nearly half of all smartphones in the country, according to Johannesburg-based research company World Wide Worx.

That growth in the African market is helping to compensate for BlackBerry’s decline in the US and Canada, said Arthur Goldstuck, managing director of World Wide Worx.

In South Africa, the wealthiest country in Africa with a GDP of $275 billion, BlackBerry's success is driven by the youth market, which is lured in by price: an entry-level BlackBerry costs far less than other high-end smartphones, and it comes with a flat data rate of about $7 a month.

More from GlobalPost: Nigerians tweet to keep their elections honest

“BBM is what drives the cool factor for BlackBerry,” Goldstuck said.

The brand has made focused efforts to reach out to its young, black clientele, through events on university campuses, secret music gigs, Slikour — a South African rap star — for a spokesman, and a highly popular Facebook page for BlackBerry South Africa.

RIM is working to expand its reach in Africa, launching a developer program in key IT hubs such as Kenya, Nigeria and Egypt, and working with universities around the continent.

Last month RIM opened a BlackBerry Apps Lab at the University of Pretoria, aimed at developing new applications and content to appeal to an African market.

“African economies are expected to rise by an average of 6 percent in the coming year,” RIM Africa head Bob Bose noted at the launch event.

“This incredible growth, we think, is facilitated by the unprecedented adoption of mobile technology, which is driven largely by the demands of the African youth and business communities,” Bose said.

Goldstuck said that in Nigeria, Africa's most populous country with 160 million people, BlackBerry is the No. 1 smartphone brand, thanks to its aspirational appeal.

“People see it as a symbol of having made it in business,” he said.

More from GlobalPost: Canadians are choosing iPhones over the country's homegrown BlackBerries

In comparison, the iPhone is viewed as an expensive toy rather than a business tool — not the image that an up-and-coming Nigerian entrepreneur would want.

While the market in Nigeria is still tiny, with smartphones comprising less than 5 percent of mobile phones, there are 2.4 million BlackBerries in use in Nigeria. RIM sees big potential and is in the process of opening an office in Lagos, its first in the country.

Already BlackBerry has strong brand awareness in Nigeria. A movie released by Nigeria's Nollywood industry last year, called “BlackBerry Babes,” tells the story of young women trying to live beyond their means. One of them even dumps her boyfriend because he won’t buy her a BlackBerry.

According to Goldstuck, BlackBerry’s fortunes have been helped by the fact the supply of iPhones in Africa is extremely limited, unlike in the United States where they are readily available.

“Apple has throttled the entire African market by not seeing it as a priority market,” Goldstuck said.

“It’s a very short-sighted strategy,” he added. “It’s a very colonial strategy. They see the developing world as the colonies, as backwaters.”

But despite its head start, BlackBerry faces mounting challenges from Android phones, in particular the new Samsung Galaxy S3, which launched in Africa last week.

Even in Africa, BlackBerry must not rest on its laurels, said Goldstuck: “BlackBerry will lose the market if it doesn’t keep a sense of urgency.”