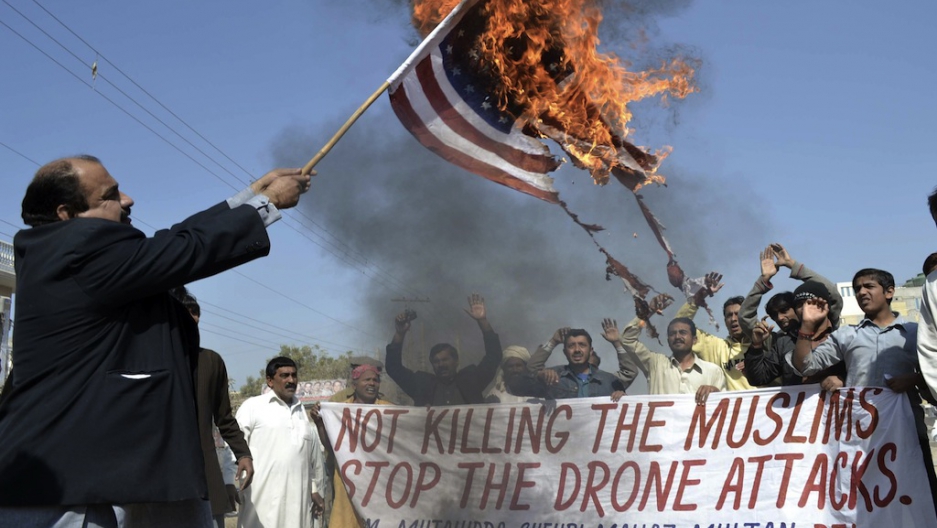 A Pakistani protester holds a burning US flag as they shout slogans during a protest in Multan on February 9, 2012 against the US drone attacks. Thousands have been killed by drones since 2004, many believed to be civilians.
Credit: S.S. MIRZA
Share

A "drastic increase" in US drone strikes has caught the attention of the United Nations' Human Rights Council, which today called on the Obama administration to prove the legality of the use of unmanned craft and its policies of assassination of Taliban and Al Qaeda leaders.

Christof Heyns, UN special rapporteur on extrajudicial, summary or arbitrary executions, issued a report to the UNHRC last night that demanded clarification on drone strikes in Afghanistan, Iraq, Pakistan, Somalia and Yemen, specifically that the CIA and the US government explain how drone strikes are calculated, what security measures are taken to minimize civilian casualties, and why targeted killings are used in favor of capturing targets, especially in sovereign nations that do not consent to the use of drones.

"The (U.S.) government should clarify the procedures in place to ensure that any targeted killing complies with international humanitarian law and human rights and indicate the measures or strategies applied to prevent casualties, as well as the measures in place to provide prompt, thorough, effective and independent public investigation of alleged violations," the report said.

On Monday, Pakistan's Ambassador Zamir Akram spoke to the UNHRC, saying the number of attacks had increased in recent years, and called the use of drones "counterproductive."

"Thousands of innocent people, including women and children, have been murdered in these indiscriminate attacks," he said, according to Reuters.

Akram noted that by Pakistan's count, 957 people were killed by drones in the country in 2010. Thousands more have been killed since the use of drones in Pakistan began in 2004, and nearly 20 percent of those killed are thought to be civilians.

Drones live in an ambiguous legal place, because they're such new warfare technology (relatively speaking). But it seems clear that international law, as interpreted by both the United Nations, as well as outside organizations such as the ACLU and Amnesty International, doesn't allow room for the kinds of warfare drones wage.

Theories about "just war" aside, there are international laws that are regularly broken by drone strikes, as Amnesty points out. A very simple one, according to a report released this month, is that drones violate "the fundamental human right not to be arbitrarily deprived of one’s life."

President Obama's recent admission of a US "kill list," which raised questions about extrajudicial killings, also left lingering thoughts about the number of arbitrary killings the military has a hand in. For its part, when counting victims of a drone strike, the US assumes anyone in the vicinity (who is male and of military age) is an enemy combatant, meaning the number of civilian victims could be significantly higher when considering the possibility that young men being in the wrong place at the wrong time does not make them terrorists or militants.

Salon.com's Glenn Greenwald has written extensively about the original New York Times article that broke news of the "kill list," and has continued to follow the drone story closely, particularly when it comes to civilian casualties.

"If drone strikes kill nobody other than 'militants,' then very few people will even think about opposing them (and that’s independent of the fact that the word “militant” is a wildly ambiguous term — militant about what?" he wrote earlier this month.

A recent Pew Research study concluded that while drone strikes remain popular in the US and Western Europe, the east is losing faith and patience with the American military's decision-making apparatus, and many believe, like the UN, that drones are both immoral and illegal.

"There remains a widespread perception that the U.S. acts unilaterally and does not consider the interests of other countries. In predominantly Muslim nations, American anti-terrorism efforts are still widely unpopular...In 17 of 20 countries, more than half disapprove of U.S. drone attacks targeting extremist leaders and groups in nations such as Pakistan, Yemen and Somalia," said the Pew report.

Meanwhile, the Pakistani Taliban yesterday announced that polio vaccines will be withheld from the people of the North Waziristan region as a form of protest against US drone strikes.

"Polio drops will be banned in North Waziristan until the drones strikes are stopped," said the Taliban's statement on Saturday, CNN reported. "Almost every resident of North Waziristan has become a mental patient because of the drone strikes, which are worse than polio. On one hand, the U.S. spends millions of dollars to eliminate polio, while on the other hand it kills hundreds with the help of its slave, Pakistan."

Pakistan is one of the few countries left in the world where polio hasn't been eradicated.

The UN will debate the use of drones this afternoon in Geneva.