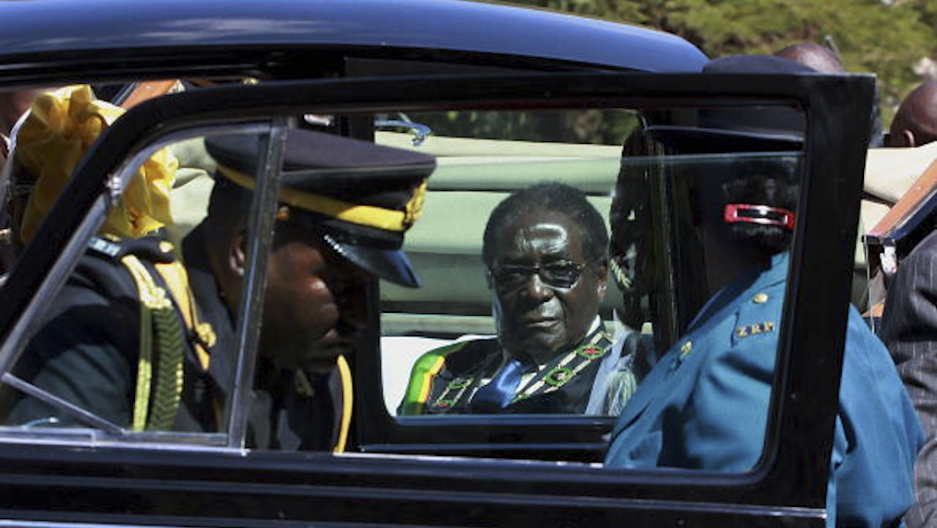 Zimbabwe's President Robert Mugabe arrives in his motorcade for the opening of the third session of the parliament in Harare on July 13, 2010.
Credit: DESMOND KWANDE
Share

"Bob Mugabe and the Wailers" - that's how Robert Mugabe's motorcade has been known for years, because of the screaming sirens from its cars, warning drivers to pull fully off the road and stop when it whistles by.

But now Mugabe's motorcade is no laughing matter: It has been involved in three fatal accidents in the past two weeks.

This week one person was killed and 15 injured when the lead car in the speeding motorcade crashed into a minivan taxi, according to the BBC.

The crash occured Sunday in the rural area of Zvimba, Mugabe's birthplace, about 50 miles northwest of Harare.

Earlier this month, a motorcycle in the presidential cavalcade hit and killed a homeless man during another visit to the president's hometown. And in a separate acccident on the same trip, a member of the presidential guard died and seven others were hurt when a truck in the motorcade overturned after one of its tires burst, reported CNN.

While the three fatal accidents in just two weeks has shocked the world, it comes as little surprise to motorists in Zimbabwe, who have been intimidated for years by the president's fast-traveling, gun-toting entourage.

The motorcade often includes more than a dozen vehicles, including Mugabe's armored Mercedes, others luxury vehicles and an army truck full of soldiers bristling with AK-47 rifles. People see it whisk by at surprisingly high speeds in Harare and wherever Mugabe travels in the country. The speed at which the cars travel alone is a danger, particularly given the dilapidated and pot-holed state of Zimbabwe's roads these days.

The passenger windows of Mugabe's sedan are curtained so it is difficult to actually see the president as he goes by.

Several years ago Zimbabweans, who had been waiting for hours in a lengthy line for gasoline, jeered and threw garbage at the motorcade. Army and police officers quickly went to the spot and beat up people to teach them a lesson. Then a law was passed by Mugabe's rubber-stamp parliament to make it a crime to shout at the motorcade or to show any disrespect.

There are plenty of reports of elderly drivers who were slow to respond to the motorcade being force off the road. The phalanx of motorcycles that travel in front of and around the vehicles are quick to take offense. Several drivers who offended the officers were pulled from their cars and slapped and beaten.

I remember having the motorcyclists pull up to my car and warn me because I had not pulled completely off the road.

But one day I actually benefited from the motorcade. I had traveled to Zvimba, to cover one of Mugabe's visits to his birthplace. I had left the rural area and had reached the main road when I heard the motorcade approaching. I duly pulled completely off the road and came to a full stop. The motorcade sped by. After the last vehicle and motorcycle went by, I pulled out on to the road and started to drive. I found myself driving in the wake of the motorcade with no slow-moving traffic to get in my way.

For miles I drove close behind the motorcade, driving at speeds much higher than I was used to and I thought I would get back to Harare in record time. But then one of the motorcyclists noticed that I was hitching a ride, as it were. He slowed down and waved me away. I duly complied. I didn't mind returning to Zimbabwe's slow lane, it was much safer.

More from GlobalPost: Who else is outraged that Mugabe is a UN tourism envoy?