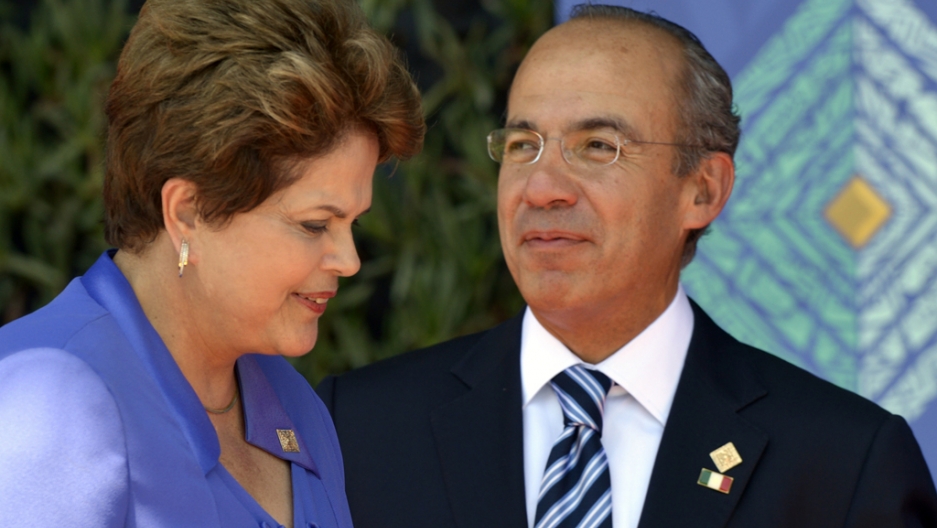 Earlier this month, Mexico beat Brazil in a soccer match seen as a friendly warm-up for World Cup qualifying games.

Off the field, though, the countries are jockeying to outdo one another as Latin America’s economic powerhouse, and it isn’t always so friendly.

By name, Brazil has a clear early lead. It branded the “B” in BRICS — that nifty acronym for the world’s largest emerging economies, also including Russia, India, China and South Africa. At the turn of the noughts, when the term was coined, Mexico's growth paled in comparison.

But the club could one day make way for “M” (BRICMS?), for Mexico, host of world leaders attending this week’s Group of 20 meeting.

On Wednesday, not to be outdone, Brazil takes the stage hosting world leaders at the Rio+20 sustainable development conference.

Last year Mexico’s economy grew faster than Brazil’s and this year it looks set to do it again. Last week, the United Nations’ Latin America commission put 2012 economic growth for Mexico at 4 percent, and Brazil at just 2.7 percent.

This year tensions mounted between the two countries over Mexico’s rising auto exports to Brazil. In March, the former bowed to latter, choosing to reduce its car sales to Brazil.

“The dispute has undermined relations between Latin America's top two economies and laid bare the differences between free-trade disciple Mexico and Brazil, which is increasingly resorting to protectionist measures.”

But it’s not just cars. The New York Times says, “Mexican factories are exporting record quantities of televisions, cars, computers and appliances, replacing some Chinese imports in the United States.”

Mexico suffers a bad reputation with drug-fueled violence. Although the drug war is mainly among rival cartels and Mexican security forces, the many decapitated and dismembered corpse pile-ups are just not good for attracting foreign investors. President Felipe Calderon, whenever he has a chance like this week to face world leaders, he works hard to paint a different picture of his beautiful homeland.

This weekend, a New York-based credit card salesman told me that he’s much more inclined to look at real estate in one of the hip neighborhoods of Mexico City than in a Brazilian city. “Brazil’s just really not that safe,” he said, describing an armed attack in a subway station that he witnessed, as the government was forcing gangs out of slums.

GlobalPost reporters have said they rather enjoy life and all its quirks in Brazil.

But finding a flat in Rio de Janeiro can be a challenge. The Associated Press’ Jenny Barchfield recently put it this way: “I found myself plunged into the inferno of one of the hottest real estate markets in the world.” She said Rio's cramped apartment rental prices rivaled high-end properties in New York and Paris, cities she’d recently lived in.

And yet, Barchfield found a silver lining. She wrote, "outside my bedroom window, palm trees shake in the breeze and the squawks from a flock of wild parrots echo through my apartment. Each time I leave my building, I'm greeted by the picture postcard sight of Sugarloaf Mountain and the Guanabara Bay, the expanse of its azure waters glinting warmly. Finally, I'm home."

For some corporate folks, Brazil's alluring charm is fading. This year, Brazil slid six spots to 126 out of 183 countries ranked in the World Bank’s Ease of Doing Business index.

Brazil’s stock exchange is three times larger than Mexico’s but the Latin North American economy’s stocks are grabbing investors away from the South American one, Reuters reported in May.

Eurasia Group, a risk consultancy, recently tried to temper the jitters about Brazil. “The recent bout of pessimism over the policy environment in Brasilia is a bit overstated,” Eurasia analysts wrote in May.

”President Dilma Rosseff has given many indicators that she is fiscally more conservative than her predecessor [Luiz Inacio Lula da Silva],” they added, citing several reforms under way that the group sees as positive signs.

Other analysts forecast a “changing of the guard” from Brazil to Mexico on the horizon.

“Over the past decade, Brazil has undoubtedly been the shiniest macro story in Latin America, offering investors ample opportunities. Looking forward, however, stars appear to be increasingly aligned for an economic outperformance of Mexico. A changing of the guard is slowly but surely taking place,” analysts at New York-based Nomura Securities wrote.