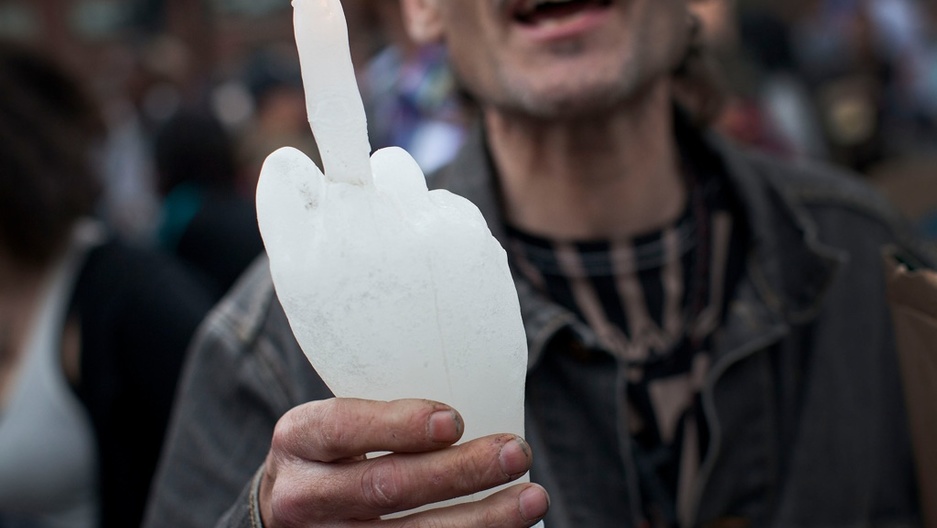 An Occupy Wall Street protester holds up a candle in the shape of a hand giving the middle finger on March 24, 2012 in New York City.
Credit: Andrew Burton
Share

Who says the universe doesn't have a sense of humor?

Or, at least, a grim, twisted, very dark and slightly profane sense of humor.

That's the case on European bond markets today, where there's very little left to do but laugh.

You might think that the election victory yesterday in Greece by the New Democracy party would at least give a little relief — even temporarily — to the serious debt problems across Europe.

With Greek voters narrowly supporting the pro-bailout party — you might reasonably conclude — the chances of a disorderly Greek exit from the euro zone would decrease.

An unruly  "Grexit," of course, would put further pressure on Spain, Italy and other debt-ridden countries across Europe.

It would also unnerve the global financial system, as banks just about everywhere hold European debt.

So, phew, the pro-bailout party wins and Greece and the EU get a little more time to figure this mess out.

But check out this chart on Spanish 10-year bonds today, which our friends at Business Insider have brilliantly dubbed "The Spanish 10-Year Yield Middle-Finger Formation":

As the chart above illustrates, the yield — or put another way the rate at which investors are willing to accept for betting money on the Spanish government right now — surged to a record 7.2850 percent before falling back later in the day.

The result: a giant middle finger, or as Business Insider writer Eric Platt put it:

"Perhaps this is the bond market's way of saying that the elections solved nothing."

Krugman takes the long view, placing blame not (entirely) on Greece, but rather on the very structure of European Monetary Union:

"No, the origins of this disaster lie farther north, in Brussels, Frankfurt and Berlin, where officials created a deeply — perhaps fatally — flawed monetary system, then compounded the problems of that system by substituting moralizing for analysis. And the solution to the crisis, if there is one, will have to come from the same places."

The election in Greece settles nothing, and Europe — and potentially the rest of the global economy — lurches onward in what increasingly feels like a slow motion fiscal and political train wreck.

Sometimes I just feel like flipping you the 10-year Spanish Yield chart.