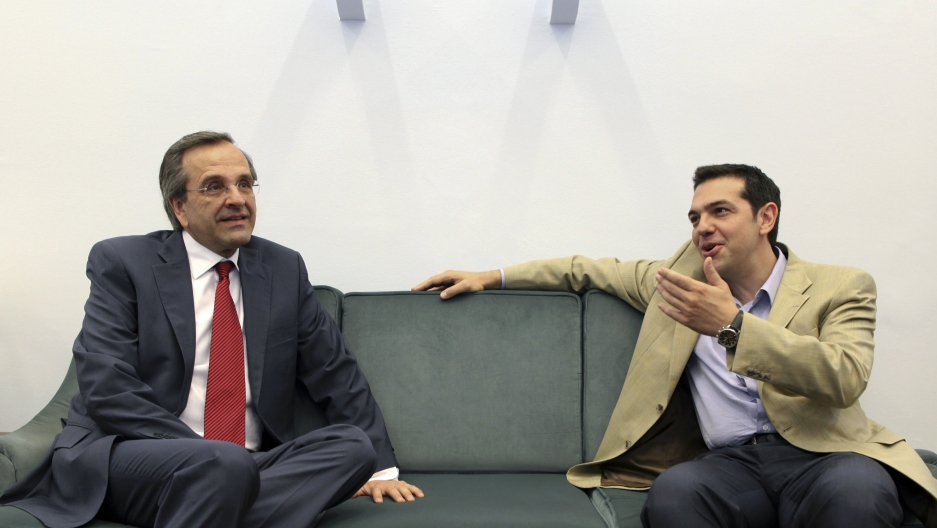 Greece took a step back from the economic abyss over the weekend when voters gave majority support to a pro-bailout party, leading many to believe that Greek's flirtation with default and leaving the euro may have passed.

Leaders of the New Democracy party claimed victory Sunday night in Parliamentary elections, necessitated after the last round of elections produced results where no party could reach a majority, and no party could form a coalition to govern. New Democracy, according to The New York Times, won 30 percent of the vote and 128 seats in Greece's 300-member Parliament. Not enough to reach a majority, necessitating a coalition with another, smaller party.

New Democracy leader Antonis Samaras told the BBC that he hopes to form a "national salvation" government, comprised of as many parties as possible.

"I will aim to immediately form a long-lasting national 'salvation' government with the parties that believe in the country's European future," Samaras said, reported the Wall Street Journal. "I believe there is room for success."

Samaras said he would seek changes to the terms of the EU bailout, but would not seek to reject it completely — a process that the second-place Syriza party advocated and that was expected would lead to default.

Syriza declined an invitation to join Samaras' coalition government, preferring to take the role of the leading opposition party.

"The role of a strong and responsible opposition... is to intervene in a powerful way and this is what I assured Mr Samaras that we would do," Syriza party leader Alexis Tsipras said, according to the BBC.

While initial reaction to the results of the Greek vote, at least in the financial markets, was positive, by Monday afternoon that positive spirit had evaporated.

According to the Times, the shift back into negative territory was due in large part to renewed focus on the European countries still struggling to get their debts and spending under control, particularly Spain, which is seeing its borrowing costs rise as its bank feel increased pressure and vulnerability.

The ongoing European economic crisis will be a major topic of conversation at the G-20 summit, Monday and Tuesday in Mexico, as well as at an E.U. summit in Brussels next week.