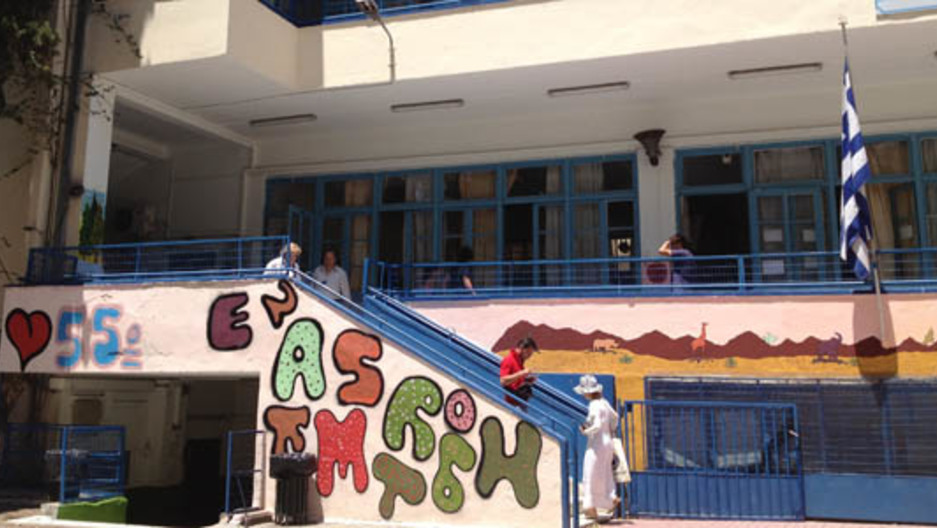 Share
A day after the elections in Greece, the winner – a center-right party called New Democracy – began the difficult task of trying to form a coalition government. A leftist group of parties, Syriza, which took a close second, today reiterated that it will not be part of the coalition. The results of yesterday's polls were widely seen as a vote by Greeks to stay in the Eurozone. New Democracy has promised it will live up to the commitments the country has made to Europe, but would like to revisit the time-line for paying back its debts. European officials continue to insist that Greece must live up to what it has already agreed to do. In short, for Greece the crisis is anything but "over." Meanwhile, life in the Greek capital went on as usual. The traffic was heavy. The warm sun beat down. People – those who still have jobs – went to work. The ATMs were still dispensing euros, and there were no long lines of Greeks waiting to withdraw their money. New Democracy leader Antonis Samaras wants to keep Greece in the eurozone. As he officially received his mandate to form a government from the Greek President, Samaras promised to "immediately attempt to form a long-tern national salvation government with the parties that believe in the European perspective and the euro." Samaras promised that Greece would keep its commitments, but has said that he would try to convince European leaders to give Greece more time to pay back its outstanding debts. "Greeks," Samaras went on, "need to be relieved of this tortuous reality today, with unemployment and the incredible difficulties that every Greek family is going through." New Democracy will try to form a coalition with two left-leaning parties, PASOK and the Democratic Left. If both of those parties join, the coalition would have a 29-seat majority in Parliament. Second-place Syriza said today it won't participate in a coalition, but instead will remain in opposition. The party opposes the European bailout terms, and argues that the agreement should be thrown out completely. Syriza MP George Stathakis says his party deserves a lot of credit despite finishing second. "New Democracy and many other parties had shifted toward the agenda of Syriza," he said. "The existing agreement cannot be fulfilled, can not be applied. So, we think that New Democracy now has the space to renegotiate the best they can." But there are many here who think that any new Greek government, once formed, will be fragile and ill-equipped to govern or negotiate. When I ask Yanis Varoufakis, a Greek economist, if the situation in Greece is bad, he says, "No. It's worse than that." "Greece is ungovernable. It's social economy is imploding," says Varoufakis. "Therefore, even if the best politicians from the universe descended on earth, I don't think they'd have much of a chance of shifting this debacle, and putting it in the right direction." At polling stations around Athens yesterday, I asked voters what they thought the biggest task facing a new Greek government is. One voter, who didn't want to tell me who he voted for, said, "As per the requests of our European partners, we have to cut back on public spending, and corruption and tax evasion." Another said, "For me it's education, because without education, a nation cannot go further. Every educational system, every educational institute in Greece has problems." Still others said that illegal immigration is Greece's biggest problem. For its part, Europe wants Greece to stay focused on its agreements, and on internal structural reforms. Some think that's a luxury the country can't afford right now given the state of the "First you have to arrest the free fall. And once the free fall is arrested, then we can talk about reforms," says economist Yanis Varoufakis. "We can plan for reforms right now, and it would sensible to do that. But to expect that firstly we can implement them, and secondly that they would make a difference. It's a bit like the Titanic having hit an iceberg, it's leaking water everywhere, and the captain and his officers debating the efficiency of its engines." Also, before anything can move forward, Greek politicians have to actually to form a government. Late today, PASOK agreed in principle to join New Democracy's coalition. The Democratic Left said that it still wasn't ready. Negotiations will continue on Tuesday.