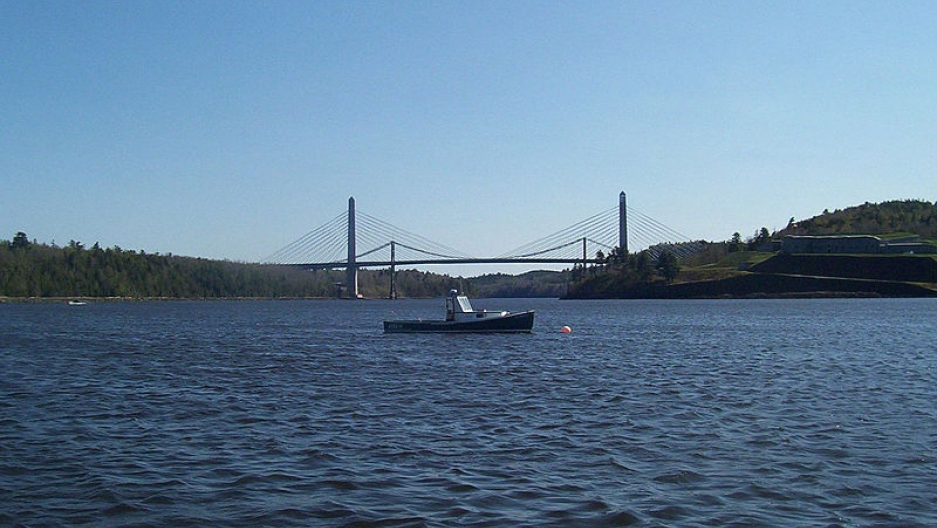 The dams on the Penobscot River are being dismantled to restore the river's natural flow and rebuild the heavily reduced fish habitat. (Photo by SarekOfVulcan via Wikimedia Commons.)

The ceremony helped mark the destruction of the Great Works Dam. It was built 125 years ago and over time helped turn the Penobscot - the second largest river in New England - into one of the most endangered rivers in the nation.

U.S. Interior Secretary Ken Salazar was on hand as wrecking crews started to take the dam down.

"This historic moment on the Penobscot River, this great example for Maine and for the United States of America, has finally come," he said.

Dismantling the dam is a $62 million project, led by the National Oceanic and Atmospheric Administration.

John Catena, NOAA's Northeast Regional Supervisor, said there were multiple benefits to taking the dam down. But, especially, for salmon.

"Getting fish back up into their grounds where they can reproduce; it’s a basic fact that fish that migrate from the ocean into these rivers need to get to their spawning grounds to reproduce and live out their lifecycle," he explained. "That leads to a whole cascading effect of feeding other birds that prey on these kinds of fish. Certainly, allowing fishermen to get out on the river again (is a benefit), and for fish these species (can) get back out into the ocean."

Once there, they're prey for cod, haddock, bluefish, tuna — large ocean fish.

Last year, some 3000 salmon made their way down the river. That's more than double what was seen before river restoration efforts began, but it's a far cry from the tens or even hundreds of thousands of salmon that were believed to traverse the river in the years before the dam went up, Catena said.

The Penobscot River isn't the only one getting attention though. The Kennebec River is another great success story, Catena said.

"The first dam that was removed on that system is the Edwards Dam - came down in 1999," Catena said. "There were no alewives that were running in that river at the time."

In the last year there were more than 3 million of the tiny fish, which eventually become prey to much larger fish.

"The state of Maine was very aggressive in trying to repopulate that river by stocking — taking alewives from other locations in the state — putting them in those ponds upstream," Catena said. "That allowed them to get a jumpstart on the population and the population has just taken off like a rocket."

"The community that’s interested in dam removal over the last five to ten years really has seen these projects grow tremendously," Catena said. "Agencies, and it’s not only the benefits that we care about at our agency - that is the fisheries benefits — but oftentimes these are local liabilities to communities, they are safety hazards, they are financial liabilities because they’re in disrepair."

Most of the dams that are being removed, he said, were setup to drive mills for making flour or other products that are now powered by electricity. So most of the dams serve no purpose by remaining.

Catena said there are thousands of dams that could come down in the northeast United States, because of the rivers' old industrial uses, but the reality is they're all over the country.

In fact, the largest dam dismantled to date was in Washington state, where the Elwa Dam was completely dismantled in a process that ended this spring. The dam produced very little hydroelectric power and had reduced the local salmon population from some 400,000 before construction to just 4,000.

The U.S. government purchased and dismantled the dam, and habitat restoration work continues.

But while the United States is working to apart some of its dams, countries like Brazil and China are putting this up fast as they can.

"Our country went through it a long time ago and those countries as a means of development are looking at the same type of issue, and I just hope that they’re taking into account the kind of lessons that we’ve learned here – in taking into account fish passage needs," Catena said.

All told, Catena said, thousands of dams in the United States need to be dissembled and the rivers restored to how they were meant to run.

"This is a long term effort, it’s really just starting. Again, it’s been in the last five to 10 years when things have started to pick up," Catena said. "We took a couple hundred years to make these problems, so it’s going to take some time to resolve them."