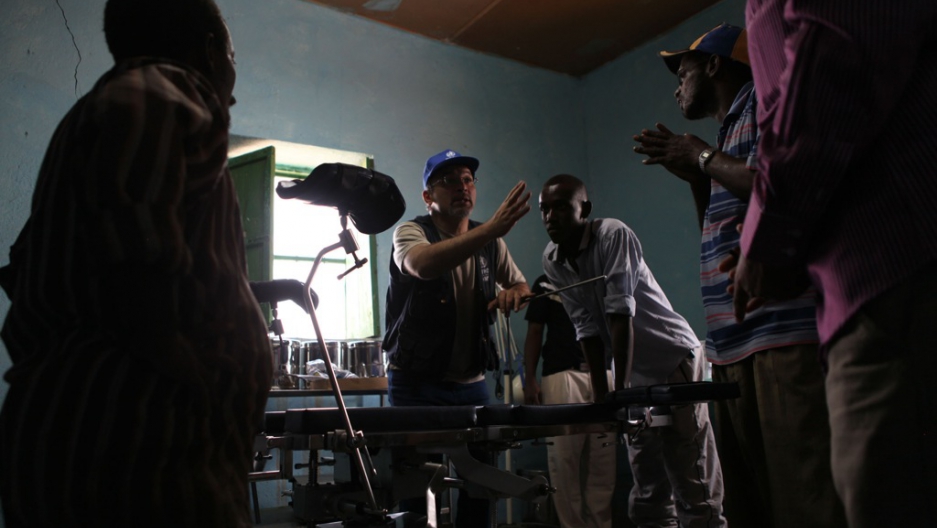 HUDUR, Somalia — For nearly four years no one in this central Somali town had seen a doctor. Cancers spread, tumors and cists grew, wounds were roughly stitched with unsterilized needles, fractures healed unevenly on their own, mothers died and babies were born, all without medical care.

When Somalia’s Islamist extremists, Al Shabaab, took over Hudur town in Bakool region in 2008, they evicted the only aid agencies operating in the town and looted the storerooms at the town’s only medical center, a maternal health clinic.

Since then the clinic was largely abandoned. The town’s five midwives continued to do what they could, but with neither pay nor supplies.

This week all that changed with the opening of a new medical center, equipped with an operating theater, a ward and a well-stocked pharmacy. Set up by the World Health Organization (WHO) the clinic offers free medical care to the people of Hudur, just two months after Al Shabaab were kicked out.

When more than 2,000 Ethiopian soldiers and government troops advanced on Hudur in April the militants withdrew. Now the insurgents’ first roadblocks are 12 miles away and Hudur, a provincial capital of 40,000 people, is under tight control of the Ethiopian troops. Medical treatment is, once again, possible.

At the neglected clinic, electricity and running water were quickly rigged up under orders from Dr. Omar Saleh, WHO’s emergency coordinator for Somalia. He and two Somali colleagues are opening clinics in towns recently abandoned by Al Shabaab in an attempt to extend basic medical services beyond the capital Mogadishu.

“We have to start treating people where they are,” said Saleh who had flown to Hudur with $70,000 worth of medical supplies and equipment.

By 9 a.m. the next morning there were scores of people gathered in the clinic compound. A growing pile of traditional walking sticks and daggers lay by the gate where a guard frisked new arrivals.

Among the first to arrive was Asho Hassan, a 39-year old woman with a rattling cough and red-rimmed eyes. “I haven’t seen a doctor in 10 years,” she said squatting in a patch of shade.

Amino Mohamud, 76, had also lived without medical attention for a decade since she was hit by a stray bullet that is still lodged in her left buttock. She leaned heavily on her walking stick, moving with a slow and painful rolling gait.

“The whole country has been destroyed, controlled by different armed groups like Al Shabaab, so there was nowhere to get any assistance, no doctors, until now,” she said.

Inside, lining the powder-blue walls of the waiting room, were dozens of men in macawis (traditional cotton sarongs) and shirts, with red, henna-dyed beards and hair, women in bright hijabs and flowing robes, and children.

“The only medical facilities [in Hudur] are private pharmacies which are too expensive for most people,” said Abdi Abdi, who was helping process the patients. “The nearest free hospital is in Mogadishu, hundreds of kilometers away, so for many people, they go without treatment.”

On the clinic’s first day over 100 patients were seen and seven received operations, including a young boy thrown from a donkey cart and an elderly man with a golf ball-sized fibrous tumor in his back.

There were more than 150 consultations on day two and seven more operations, all carried out by two Somali surgeons, Mohamed Warsame and Omar Bile, both of whom had been flown in from Mogadishu and who would stay on to operate the hospital and train nurses.

While charities, aid agencies and donors are sharply focused on the capital, Mogadishu, their view is blurry at best in most other parts of the country where it is considered too dangerous, difficult or expensive to operate. As a result Somalis continue to leave their homes, drawn to Mogadishu in search of food handouts, healthcare or jobs.

The opening of the new clinic here in Hudur shows the recent progress made by the Transitional Federal Government and the African Union forces. Al Shabaab have been pushed out of Mogadishu and several other Somali cities. WHO has also been able to reopen clinics in Baidoa in the south, Dolow in the west and Galkayo in the north.

Saleh said the Hudur clinic’s opening was symbolic as well as practical.

“We have established a hospital and operating theater. This is a very important first step,” he said. “But what we are doing here is part of a bigger plan.”

Saleh said that the impact of Al Shabaab’s occupation of the town and the collapse of medical care could still be seen in the patients gathering to receive treatment for the first time in years.

He said that up to 40 percent of those he had diagnosed in Hudur are already beyond help: “This is what happens: if people wait, they die.”