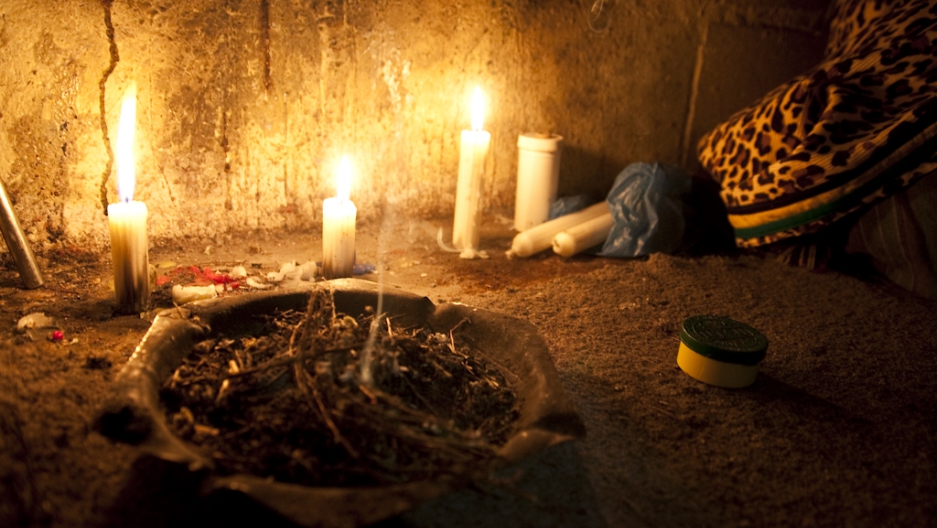 Eleven people from a community near Malalane, South Africa, are accused of burning a pastor to death because they thought he was using an invisible magic penis to sleep with women. They now accuse the pastor's family of using traditional medicine, or "muti," to put a curse on the villagers responsible for his murder.
Credit: Erin Conway-Smith
Share

With tensions running high between the behemoth National Union of Mineworkers (NUM) and the breakaway Association of Mineworkers and Construction Union (AMCU), union leaders say they are taking the witchcraft allegations seriously.

The two unions, NUM and AMCU, are fighting for control among workers at the world's biggest platinum mine, located in Rustenburg, northwest of Johannesburg.

Frans Baleni, NUM's general secretary, told journalists Thursday that the rival AMCU is having success in attracting members at the Impala Platinum (Implats) mine because of special "muti," or traditional medicines, made from ingredients that can include plants and animal parts.

Muti is an important practice in southern Africa, and South Africans from all walks of life seek out traditional cures for ailments ranging from rashes to erectile dysfunction, as well as for magical purposes such as bringing good fortune in love and business.

In addition to muti, NUM's members also believe the AMCU has a "very strong 'sangoma'," or witchdoctor, according to Reuters.

AMCU officials have denied they are using witchcraft. But Baleni said the issue can't be taken lightly because many of the union's mineworkers, which number more than 300,000 in total, believe in such things.

"We are taking it seriously as part of the tactics of this union as our members are telling us about the use of sangomas and muti," Baleni told Reuters.

BusinessDay reported Thursday that NUM "has as good as lost its majority" at the Implats mine, with more than 8,000 employees having left to join the AMCU. The newspaper described it as the biggest setback NUM has experienced since its founding in 1982.

The battle over recruitment has been bloody. Four people have died so far this year in fighting between the two unions.

A strike that closed the mine for six weeks also resulted in dozens of people being injured. Protesters barricaded roads, set fire to a police office and attacked miners going to work with guns, axes, stones and "knobkerries" (wooden clubs).

Bloomberg said the battle between the two unions could spread to other mines, and disrupt platinum production.

More from GlobalPost: Villagers accused in "magic penis" killing fear they are cursed