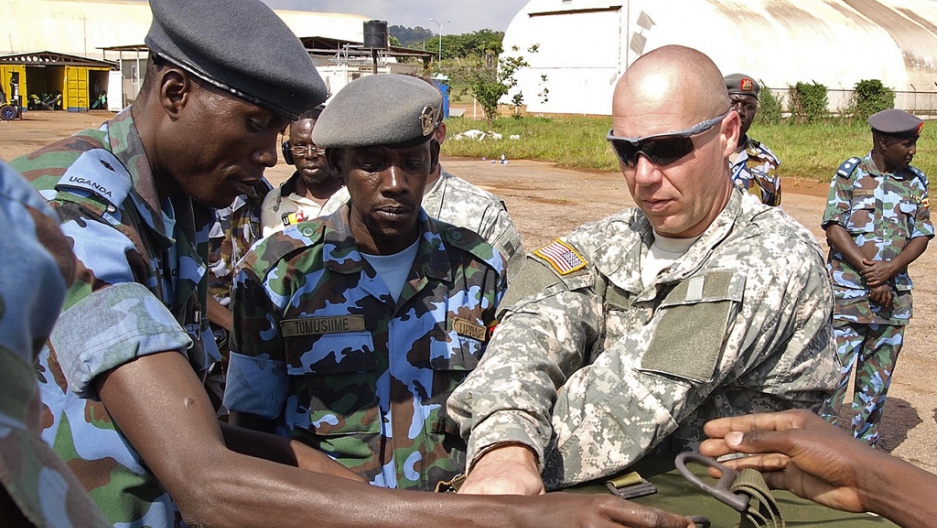 US soldiers assist Ugandan Airforce personnel at a military airbase in Entebbe, Uganda. The food supplies were destined for frontline Ugandan troops hunting rebel group, The Lord's Resistance Army (LRA). US Presdient Barack Obama has deployed 100 special forces soldiers to help track down LRA Chief and international fugitive Joseph Kony who has been active across four countries in the region for over two decades.
Credit: Michele Sibiloni
Share

Obama's official line is that the United States will help Africa become the world’s next big economic success story. The covert surveillance part came separately, in a good piece of investigative reporting.

Obama’s new Africa strategy, launched Thursday, spells out how the administration plans to spur economic growth through trade and investment and to strengthen democracy.

“As we look toward the future, it is clear that Africa is more important than ever to the security and prosperity of the international community and to the United States in particular,” said Obama.

Billed as a sweeping new strategy for US involvement in sub-Saharan Africa, the document is more like a list of the Obama administration’s successes in the continent so far and a promise to do more to boost economic development.

There is one glaring omission. The new policy does not specifically mention the security threat posed by the rapid spread of Islamic extremists, allied to Al Qaeda, in Mali, Nigeria and Somalia.

Don’t worry. The US government is not oblivious to that growing danger but the details of how it is battling the militants are absent from Obama’s new document. However, a riveting expose of how the US has established a secret intelligence operation across Africa, including a network of small air bases used to spy on possible terrorist activities, is in a Washington Post story, published Thursday.

Taken together, Obama’s new directive on Africa and the investigation into the US military’s covert surveillance network, give a fuller picture of the administration’s policy toward the continent.

When Obama took office, in January 2009, there were high hopes that the first African-American president would bring special attention to the continent.

That has not happened. Obama and Secretary of State Hillary Clinton have been busy attending to foreign policy crises including the dramatic Arab Spring upheavals in Libya, Egypt and Syria, as well as the ongoing conflict in Afghanistan and the troubles posed by Iran and North Korea.

More from GlobalPost: Obama tells Africa: Yes you can!

It was clear from the beginning of his term that Obama was not going to lavish special favors on Africa. Instead he has offered a kind of tough love to the continent, in which incentives are given for good democratic behavior and productive economic policies.

Obama’s new strategy for Africa highlights the administration’s accomplishments, including its efforts to resolve the conflict in Ivory Coast last year and to encourage reform in Kenya. In addition the US has provided important assistance to the UN’s mission in Somalia. That is bearing fruit as Al Shabaab has recently been pushed out of Mogadishu and other key Somali cities.

Obama’s Africa team did play an important role in achieving the independence of South Sudan, although that is not an unqualified success, as shown by the current turmoil on both sides of the border with Sudan. The US also provides important support to the hunt in central Africa for Joseph Kony and his Lord’s Resistance Army.

Obama’s other positive developments in Africa that are highlighted include the Global Health Initiative, food aid and the promotion of trade and investment. One of the most important efforts has been the continuation of the Bush administration’s emergency plan for AIDS relief (PEPFAR), which has proved to be an effective tool to curb the spread of HIV and provide treatment. Currently 3.8 million Africans are getting life-saving antiretroviral drugs and, by the end of 2012, that number will rise to 6 million, according to Obama’s document.

This is all good, but does not amount to a game-changing plan for Africa. Obama’s focus on economic development through trade and aid is seen as a response to China’s recent high-powered push into Africa. Bilateral trade between China and Africa has zoomed up to $120 billion in 2011, up from less than $20 billion in 2001, according to the French news agency AFP.

The US lags behind in bilateral trade with Africa at $82 billion in 2012, according to the office of the US Trade Representative.

A collective yawn greeted Obama’s Africa strategy. Africanists in Washington and beyond asked “what is new?” and said the document was long overdue and short on substance.

Much more interest was generated by the revelations in the Washington Post about the US military’s secret intelligence operations in Africa.

Intelligence on the Al Qaeda subsidiaries in Africa — Al Qaeda in the Islamic Maghreb in West Africa, Boko Haram in Nigeria and Al Shabaab in Somalia — is being gathered by small, unarmed turboprop airplanes equipped with sensors that record video, monitor infrared heat patterns and collect radio and cell phone signals.

The small aircraft are not drones. They are old-fashioned airplanes flown by pilots and they gain little notice as they crisscross the continent’s trouble spots, according to Washington Post reporter Craig Whitlock. The airplanes refuel at small bush airstrips and are stored in non-descript hangars at airports. One of the centers is Ouagadougou, Burkina Faso in West Africa; others are in Uganda, Ethiopia, Kenya, and Djibouti. There are plans to establish a new base in South Sudan.

The intelligence gathered can then be used by African and UN troops to track down terrorist groups.

A model for the US military's new strategy in Africa is the hunt for Kony and the LRA. The US is gathering intelligence from the spy planes and 100 US soldiers are helping African troops use that intelligence to track down Kony and other LRA bands. They caught one of Kony's top deputies. This takes advantage of US technology and expertise while limiting the number of actual soldiers in combat.

The American surveillance of Kony is useful but there should be more, according to Sasha Lezhnev, senior policy advisor to the Enough Project.

"Deploying special forces advisers and spy planes to help find Joseph Kony is helpful, but it's a fraction of what's required for the mission to succeed," Lezhnev told GlobalPost. "The LRA operate in a 115,000 square mile territory. A single plane is not nearly enough to be able to spot the groups. There need to be at least four planes, as well as additional helicopters to act on the intelligence, and improved civilian protection programs. European countries also need to step up and provide much better defection programs, so that LRA fighters can escape."

Most likely the Obama administration did not want to advertise that it is operating spy planes in Africa, so it did not highlight this in its new strategy for the continent.

Beneath the Obama administration’s high-flown words about boosting Africa’s economic development, the government is also doing the muscular work needed to help strengthen the continent’s security. Some say it should be doing even more.