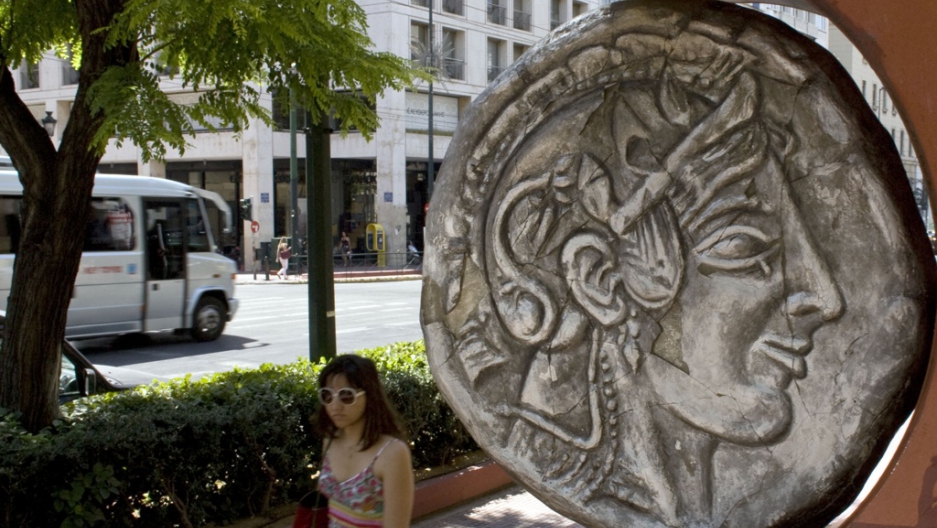 A woman pass by replica of an ancient Drachma coin in Athens. The Greek electorate are due to go to the polls in a re-run of the general election on June 17, 2012 after no combination of political parties were able to form a coalition government.
Credit: Milos Bicanski
Share

ATHENS, Greece — Greeks were outraged when IMF Managing Director Christine Lagarde expressed more sympathy for poverty-stricken children in sub-Saharan Niger than for Greeks who, she said, put their children’s futures at risk through generations of tax evasion and living well beyond their means.

They excoriated her assessment that the draconian austerity bailout package was “payback time” for Greece’s profligate ways.

Privately, however, they agree with her message. They freely concede that their country cooked its books, lying to the EU about the scope of Greek borrowing and the size of its national deficit and debt. They blame both major parties for obscenely padding public payrolls and consistently wasting opportunities to make needed reforms.

They decry the corruption and cronyism of a political system dependent on rousfetti (expensive political favors), fakelaki (little envelopes) and grigorossimo (speedy approval stamps). They damn those who have avoided paying taxes and hidden their money abroad. They know the Greek individualistic mindset and weak civic culture must change. They doubt that it will.

All around Athens there is a palpable mood of aggressiveness, anxiety and incivility, much more pronounced than just 10 months ago. It’s greater than the spike in crime, wanton graffiti, pugnacious drivers, smokers who flout non-smoking regulations, and tourism industry reps who indifferently damage the country’s cash cow. Political discourse here has always been spirited, but today it is angrier, sadder, and more uncertain.

For many, the June 17 runoff election will be a different “payback time” — an opportunity to punish the center-right (New Democracy) and center- left (PASOK) leaders who have consistently misgoverned and betrayed the nation. Frustrated voters, doubting that either has learned enough from its mistakes to be trusted again, have turned to once-fringe extremes.

On the far left are the unreconstructed Stalinists who have festooned their KKE placards and banners all over the city. On the far right is the anti-immigrant, neo-Nazi Golden Dawn party. It is unsettling to think that it won in a district in central Crete, a place without immigrants, which was the heart of the WWII resistance to the German Invasion.

According to the last pre-election public poll, the party most likely to come in first and thus receive 50 bonus seats to help it form a government is the radical left SYRIZA, less a party than a loose coalition of factions and personalities.

It’s the overwhelming choice of unemployed young voters and older ones who want to overthrow the past. It captures the spirit of carefree defiance exhibited by beleaguered and prideful Greeks when faced with foreigners they feel are dictating the terms of their lives.

SYRIZA’s audacious, poker-playing, 37-year-old leader, Alexis Tsipras, is convinced he can get the European overlords to blink, freeze payments, renegotiate on his terms and keep Greece in the euro zone. His supporters are oblivious to the myriad risks at hand and the ominous roles that China and Russia could play in a post-euro Greece.

Tsipras’ platform is naive and unrealistic. Even his backers, some speaking of emigrating, don’t know if he would make any difference in their lives.

Greeks overwhelmingly want to stay with the euro. Defaulting and returning to the drachma would be devastating. Many want serious and fairly enforced reforms. They understand the need for austerity, but not measures so immediately crushing that they stifle growth, deny hope and encourage more extremism or partisan gridlock.

But the challenge is enormous. Unlike Spain and Ireland, the issue is more than problem banks or economics; it’s structural and systemic. There is more Eastern Byzantine heritage at play here than Western Hellenism. If the ultimate solution is education, we’re talking generations, not years. But there are steps to be taken now.

The unusually high percentage of non-voters from round one could spell the difference, but they’ll likely abstain in greater numbers. Most Greeks who vote will cast their ballots with one hand, holding their noses with the other, believing the alternatives to be far worse.

Fear, not hope is the driving emotion. Fear of SYRIZA or worse could be decisive for New Democracy and its flawed leader Antonis Samaras, who is seen, largely by older voters, as more capable of compromise, better able to form a coalition government, renegotiate agreements and not jeopardize the flow of funds.

Germany and the rest of the EU are not fault-free in creating or benefiting from the problems in Greece. There is still time for Greek voters to do the unexpected, to exhibit the honorable and untranslatable virtue of philotimo, and do the right thing.

And, if they do, the EU, ECB, IMF troika should make its own creative and positive adjustments.

The beautiful bitter orange trees now in bloom, with their harsh-tasting fruit, tell the story. The oranges can be used as weapons in street riots or turned into marmalade. But to make that delicious preserve will require lots of EU subsidized sugar.

James H. Barron, just in Athens, is an attorney and communications consultant. He is writing “The Greek Connection: Elias Demetracopoulos and the Roots of Watergate” (Melville House).