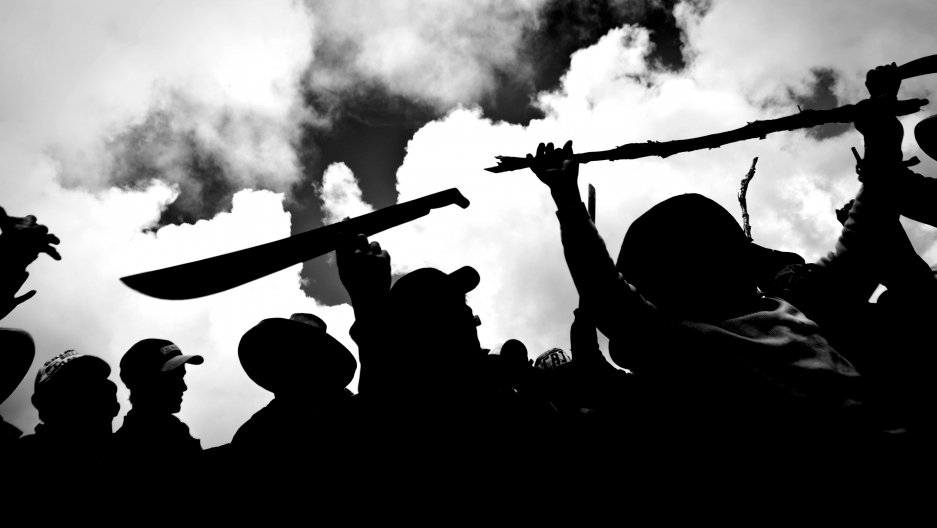 Andean people brandish machetes and sticks during a protest against plans for a huge open-pit Conga goldmine on Nov. 24, 2011 in Cajamarca, in the high Andes of Peru. The US-based mining company Newmont has promised modern reservoirs to replace threatened mountain lakes but there are also fears that pollution from the mine could affect agriculture and livestock.
Credit: Ernesto Benavides
Share

LIMA, Peru — On the campaign trail, Ollanta Humala vowed that as president he would not sacrifice rural communities to mining and oil companies that wanted to dig and drill on their lands.

The leftist candidate even pushed for a recall of then President Alan Garcia, blaming his refusal to listen to Andean and Amazonian villagers for triggering deadly clashes between police and protesters.

But as president, some of Humala's onetime allies are accusing him of authoritarianism and betrayal as his government struggles to keep a lid on a wave of angry anti-mining protests.

Police using live rounds have killed two people in clashes in the central region of Cusco over a copper mine owned by Swiss firm Xstrata, which locals say is contaminating the water table.

Village Mayor Oscar Mollohuanca had been placed in preventive custody — without charge — for leading those protests. He has now been released after an appeals court in the southern city of Ica found that the order for his detention had failed to establish his involvement as a protest instigator.

In the northern region of Cajamarca, riot police have again been cracking heads in an attempt to end unruly but largely peaceful demonstrations against plans for a massive copper and gold mine, called Conga, which they fear will devastate local lakes and streams.

Meanwhile, Gregorio Santos, the regional president of Cajamarca and a former Humala ally, is now under criminal investigation for “incitement to rebellion.”

The alleged crime happened during a speech he gave accusing Humala of going back on campaign promises. In the speech, Santos asked rhetorically: “When the president doesn’t keep his word?” The crowd responded: “They kick him out.”

According to Peru’s chief prosecutor, Jose Pelaez, that exchange constitutes an “attempted coup” by Santos, who has presidential ambitions of his own.

That outraged some commentators.

“Only classic dictatorships … can confuse opinions with crimes of sedition, rebellion or rioting and try citizens as a result of their statements,” warned La Republica, one of Peru’s two leading newspapers, in an editorial.

Meanwhile, Prime Minister Oscar Valdes turned up the heat with a highly confrontational series of Tweets, accusing mining opponents of variously “throwing poison” and wanting to light a “giant bonfire.”

He added that the protest leaders were “rotten” and “frozen” and wanted to keep Peru as a “chakra,” a local indigenous term that means a peasant’s plot of land.

One of Conga’s most trenchant critics, former Catholic priest Marco Arana, accused Valdes of “authoritarianism and the criminalization of protest.”

Speaking to GlobalPost, he also accused the premier of having a conflict of interests, given his well-publicized ownership of a medium-sized mining concession on the coast.

The government has tried to paint Arana, who now runs Grufides, a Cajamarca-based development nonprofit, as an environmental “radical.” But it has not been helped by the activist’s international profile. In 2009, Time magazine named Arana a “Hero of the Environment.”

Mining drives the Peruvian economy, accounting for 60 percent of its exports, and the country is the world’s second largest producer of silver and copper and the sixth producer of gold.

But Peru is also wracked by more than 200 “social conflicts,” in which rural communities fiercely oppose mining, oil drilling or other extractive industries on or near their lands, according to the national Defensoria del Pueblo, a government human rights watchdog.

Those confrontations reached a nadir in 2009 with the Bagua massacre, when more than 30 policemen and indigenous protesters were killed in clashes over controversial plans by Garcia’s heavily pro-business administration to open the Amazon up to more drilling and mining.

But before he was elected last year, Humala, a leftist former army officer, vowed to ensure his countrymen’s interests would be placed before those of foreign corporations. As a result, he even received backing from Cajamarca’s President Santos.

After nearly one year in power, Humala is anxious to ensure that Conga moves ahead. The $4.8 billion Conga mine project — partly owned by US-based Newmont Mining Corp — would be Peru’s largest ever foreign investment.

Humala’s apparent about-face, as well as his prime minister’s right-leaning confrontational style, alienates many who voted for him. Four leftist members of his Peru Wins congressional alliance quit the grouping last week.

Politicians here are notorious for breaking campaign promises. Perhaps the most blatant case was Alberto Fujimori, who won the presidency in 1990 after a prominent promise not to impose painful cuts to end an economic crisis. Within months, he launched a massive restructuring of Peru’s economy, throwing millions out of work.

Peru’s fragile democracy is still recovering from Fujimori’s time in power, which ended in an election-rigging scandal and imprisonment for directing death squads and embezzlement.

Many Peruvians now respond to politicians’ breaking their word with a weary cynicism. But others see the trend as a serious threat to democracy.

“It undermines the governability of the country by undermining the credibility of our democratic institutions, which were dangerously weak to start with,” says Arana.

Whether for or against the country’s powerful mining sector, most Peruvians are now warily monitoring the conflicts in Cajamarca and Cusco, afraid that the government’s handling of the crises will result in more bloodshed.