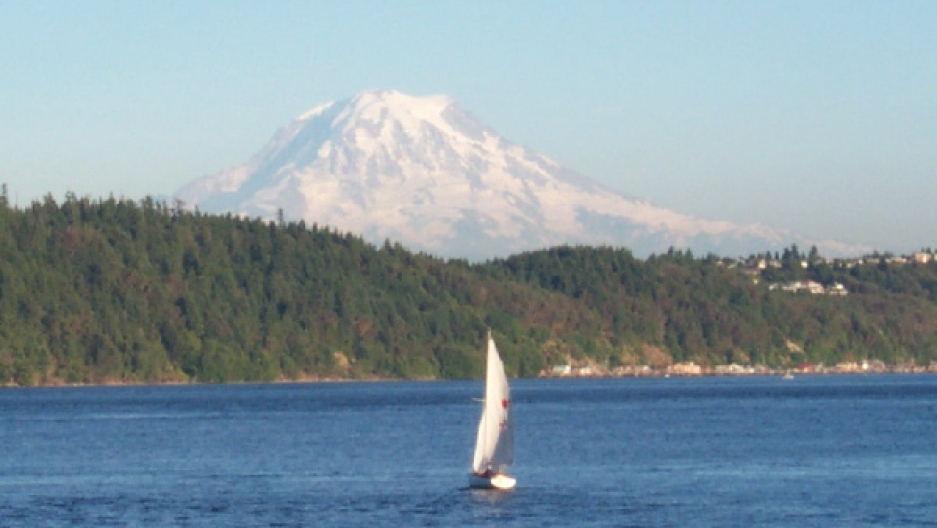 The acidity of Puget Sound is increasing as the ocean absorbs more CO2 released by human activities. (Photo by Carol Baldwin/National Oceanic and Atmospheric Administration.)

Puget Sound in Washington has become sharply more acidic in recent years — a trend being experienced by the oceans in general but exacerbated in the closed waters of the sound.

The oceans absorb a large portion of the carbon dioxide we release into the atmosphere from power plants and tail pipes. When it gets there, the CO2 makes the water more acidic and less hospitable for certain creatures, especially shellfish. Some shellfish hatcheries in Washington have lost thousands of dollars. The Governor of Washington, Christine Gregoire, has convened a panel of experts to address ocean acidification. It’s the first of its kind in the United States.

According to Richard Feeley, a scientist with the National Oceanic and Atmospheric Administration and a member of Gregoire's panel, the ocean has increased in acidity by 30 percent in the last 250 years.

The stats in Puget Sound, though, are even worse.

"In Puget Sound we see that same impact as we see in the open ocean but we also have other combined impacts that are part of the natural local processes in our region," he explained.

The local processes Feeley’s talking about starts in the ocean with tiny organisms that live near the surface and absorb CO2 from the air. When they die, they sink to the bottom and release that CO2. But that acidic water doesn’t stay down there. Ocean currents push it up and toward the shore in a process called coastal upwelling, eventually flowing into Puget Sound.

In the sound, that water tends to stick around longer than on the outer coast, making Puget Sound significantly more acidic than the open ocean. Gregoire's Ocean Acidification Panel met recently to discuss the problem and what to do about it. First order of business: figure out where exactly the CO2 is coming from.

Scientists are starting to look closer to home.

Every month, Christopher Krembs, an oceanographer with the Washington Department of Ecology, flies from Seattle down to Olympia and takes photos of the waters of Puget Sound.

Flying high above the sound, it quickly becomes apparent that not all of the water is exactly the same color. Some of that variance is because of the higher acidity and the algae it attracts. On this particular day, Krembs says its as bad as he's even seen it.

"I’m surprised about the intensity. I have not seen that at that scale," he said.

The algae thrive on the nitrates and phosphorous from our wastewater treatment plants, leaky septic tanks and runoff from fertilized lawns and agricultural lands. Krembs says over the past decade there’s been a steady and significant increase in nutrient levels in Puget Sound.

"If you have more nutrients then you will have more blooms, longer lasting blooms, larger blooms and that promotes basically a cycle where you have more algae sinking to the bottom, consuming more oxygen, producing more CO2," he said.

Scientists on the Ocean Acidification Panel believe algal blooms could be a major contributor to the increasingly acidic waters of Puget Sound, but it’s too soon to say how big.

Brad Warren, with the Sustainable Fisheries Partnership and also a part of the panel, suggests cracking down on the amount of nutrients and pollution we allow into our waterways, to cut down on algae blooms and acidity.

But that would just stop things from getting a lot worse. To really make things better, that algae will have to go somewhere. Some have suggested harvesting it and turning it into biofuel.

Others have suggested planting seaweed and other plants to remove the CO2, like we do with plants on land.

"Any of these activities that we engage in that are going to change how carbon moves through the ocean are going to matter and we need to understand how so that we can figure out how to use them and manage these activities and in fact, in some cases, probably encourage them," Warren said.

A report outlining recommendations is expected to be released at the end of the summer.