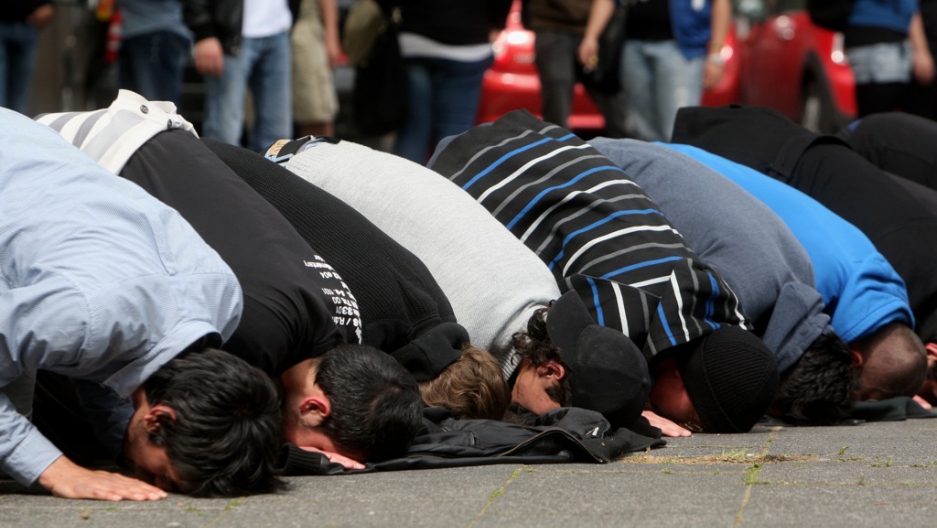 Salafist supporters pray as they counter-protest against a demonstration by right-wing pro NRW supporters outside the new Central Mosque (Zentralmoschee) in Ehrenfeld district, on May 8, 2012 in Cologne, Germany.
Credit: Mathis Wienand
Share

LONDON, UK – Police in Germany raided scores of homes, mosques and meeting halls across the country on Thursday as part of a major national crackdown on radical Islamic Salafists, whom the authorities accuses of plotting against the state.

German Interior Minister Hans-Peter Friedrich also announced that he was banning the Millatu Ibrahim organization, which he said has been inciting Muslims to fight against the “constitutional order” in Germany, the Associated Press reported.

The minister said that a “comprehensive collection of evidence” had been found during Thursday’s raids, which saw laptops, cellphones and other items seized by 850 police officers in seven German states – including Berlin and Bavaria – according to the news agency.

More from GlobalPost: Germany’s Salafists clash with the radical right

The raids come a month after Salafists clashed with police guarding an anti-Islam rally staged by the far-right “Pro NRW” party in the city of Bonn, which led to the hospitalization of two police and the arrest of about 110 Salafists, GlobalPost reported.

The German authorities fear that the Salafists – who number about 4,000, out of a total Muslim population in Germany of around 4 million – are exploiting socially excluded young Muslims in the country and inciting them to militancy, Reuters reported.

The Salafists trace their roots to the ultra-conservative Islamic practices of Saudi Arabia and aim to bring about the establishment of Sharia law in Europe. According to the BBC, items were seized from the Cologne home of Salafist preacher Ibrahim Abu Nagie in one of the police raids.