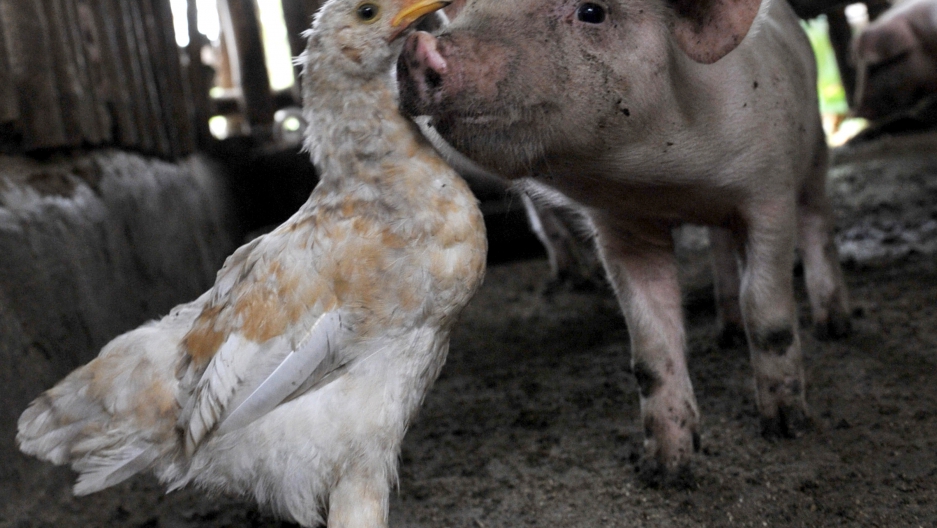 A chicken stands with a piglet at a small family farm outside the quarantined commercial pig farm infected with Ebola-Reston virus in Pandi town north of Manila on January 8, 2009.
Credit: ROMEO GACAD
Share

Researchers may have developed a cure to the deadly Ebola virus, the Globe and Mail reported today.

Ebola is a hemorrhagic fever most commonly found in Africa. The Ebola virus is one of the most deadly pathogens in the world and kills nine of 10 people it infects. The new treatment, in which injections of protein-grabbing antibodies stop the virus from replicating, has the longest treatment window so far: 24 hours. It results in a full recovery for victims of Ebola Zaire (there are five species of Ebola viruses).

There's only one catch: It can take up to two weeks for symptoms of the virus to appear.

“This is a leapfrog that brings everything forward,” said Dr. Kobinger, head of vector design and immunotherapy at Winnipeg’s National Microbiology Laboratory. “That’s why we’re so excited. … If we use the same technology, we can adapt it.”

Kobinger's next step is to lengthen the window to 72 hours. Because the virus has a 10 day incubation stage, by the time a person starts to show symptoms, it's too late. However, 72 hours after infection, doctors can detect the virus in the blood, which is a trigger for treatment.

More from GlobalPost: Fears of an Ebola virus outbreak in Kenya

However, Gary Nabel, director of the US National Institute of Health’s vaccine research centre in Bethesda, Maryland agrees that Kobinger's findings are encouraging.

“It’s an unusual finding in that there have been other studies using antibodies that have failed to protect. They’re using a cocktail of antibodies that seem to be doing better.”

However, researchers note that it’s difficult to imagine how a complex treatment requiring multiple injections like this would translate into a more volatile outbreak setting.