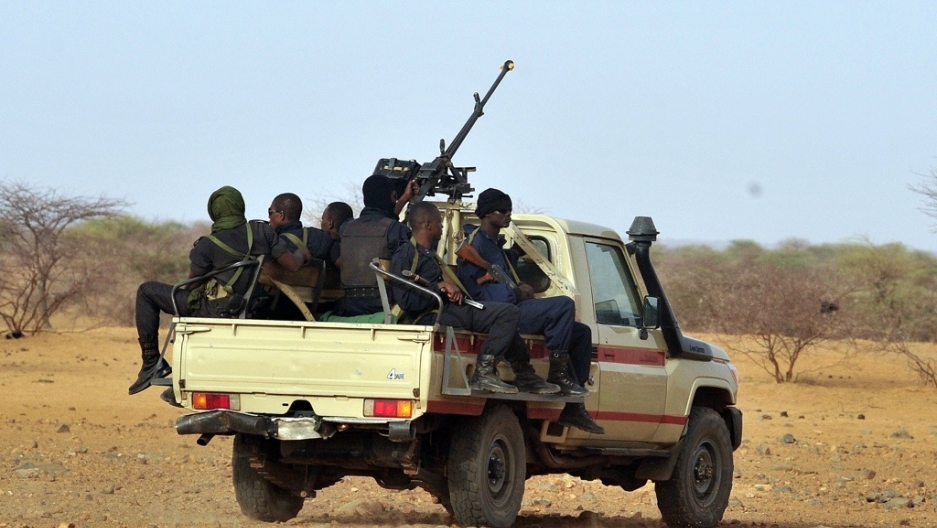 Niger's army forces patrol near a refugee camp, on May 29, 2012, where Malian refugees have found shelter. African Union chief Thomas Boni Yayi called for the creation of a UN-backed force to intervene in Mali, where Islamist militants and Tuareg rebels have declared independence in the north.
Credit: Issouf Sanogo
Share

Niger and many other countries in West Africa think so. They are afraid that Al Qaeda is making northen Mali into a base and training center to spread their extremist terror across Africa and beyond.

The African leaders are so worried about it that they want the United Nations to help them push out the rebels and regain control of the vast desert territory of northern Mali. The 16 nations of the Economic Community of West African States (ECOWAS) and the African Union are preparing to put a request for a UN Security Council mandate to fund a major military push into Mali, according to Voice of America.

Niger President Mahamdou Issoufou charged that Al Qaeda terrorists from Pakistan and Afghanistan are in Mali and are training Africans to carry out violent sabotage across the continent. He said the subsidiary group Al Qaeda in the Islamic Maghreb (AQIM) is increasing its activities and in Mali the group Islamic group Ansar Dine is imposing strict Shariah law throughout northern Mali.

Issoufou accused the extremist groups in Mali of assisting Nigeria's Boko Haram in their violent attacks, which have killed more than 450 people so far this year. Issoufou said this shows that the growth of Islamic extremism in Mali is a threat that goes far beyond West Africa.

"It is not just a threat for the region, but the world ... It is an international threat that needs an international response so this is why we have decided to take this to the Security Council," said Issoufou, speaking in Paris when he met earlier this week with new French President Francois Hollande, reported Reuters.

"ECOWAS has decided to refer to the Security Council with the objective of sending an armed force to Mali," said Issoufou. "I asked for the support of France for the resolution we are preparing."

The West Africa regional group wants the UN to issue a "Chapter 7" mandate for a military solution to the escalating crisis. It is estimated that such a mission could cost $200 million.

An estimated 300,000 people have fled Mali because of the violence and instability, reported VOA.

Six French citizens are currently being held hostage by AQIM. France is ready to help restore stability in Mali, if there is a UN resolution and African countries led the initiative, according to French president Hollande. "There is a threat of terrorist groups taking root in northern Mali," said Hollande in Paris, after meeting Niger leader Issoufou, reported Reuters.

"It is not just a Talibanization of northern Mali," said Kwesi Aning, director of research for the Ghana-based Kofi Annan International Peacekeeping Training Center, which has charted the rise of armed groups and extremism in Africa's Sahel region, reported Voice of America. "It is actually a radicalization of the Sahelian states of northern Mauretania, northern Mali, parts of northern Burkina Faso and northern Niger. ... That is why the international community, with ECOWAS, must ensure that Mali must be resolved one way or the other. Because if Mali collapses, the spillover effects and the domino effects of that crisis will be frightening."

The desert that stretches across West Africa is difficult to patrol and for centuries has been an area marked by smugglers, kidnappers and rebels. In recent years the Tuareg rebels and the Islamic extremists have used the area for their bases.

The Tuareg rebels got a boost last year when Libya's dictator Muammar Gaddafi was toppled. Several hundred well-trained and armed Tuareg rebels had been fighting with Gaddafi and they reportedly fled Libya, with lots of arms. The Tuaregs made connections with the Tuareg rebels in Mali and stepped up the fight against the Bamako government.

In March the Malian army staged a coup against the government of President Amadou Toumani Toure, calling for more support for the fight against the Tuaregs in northern Mali. But the confusion caused by the coup allowed the Tuareg rebels to seize the initiative and they quickly took the three major towns of northern Mali: Timbuktu, Gao and Kidal. The Tuareg separatists, known as the National Movement for the Liberation of Azawad (MNLA) call for northern Mali to be an independent, secular state called Azawad.

But now the Tuareg rebels are sharing power with Ansar Dine, an Islamist group that is imposing Shariah law in areas that it controls. It is not clear which group has more power. Clashes between the MNLA and Ansar Dine have erupted in Kidal, where resident protested against the strict Shariah law, reported the BBC.

The Tuaregs of the MNLA met for negotiations on June 9 with ECOWAS leaders in Burkina Faso in which they expressed their willingness to fight against Islamic terrorists, according to VOA.

A large-scale military intervention into the desert areas could easily become a quagmire, in which African and international troops unfamiliar with the harsh terrain are outmaneuvred by small bands of the local Tuareg fighters.