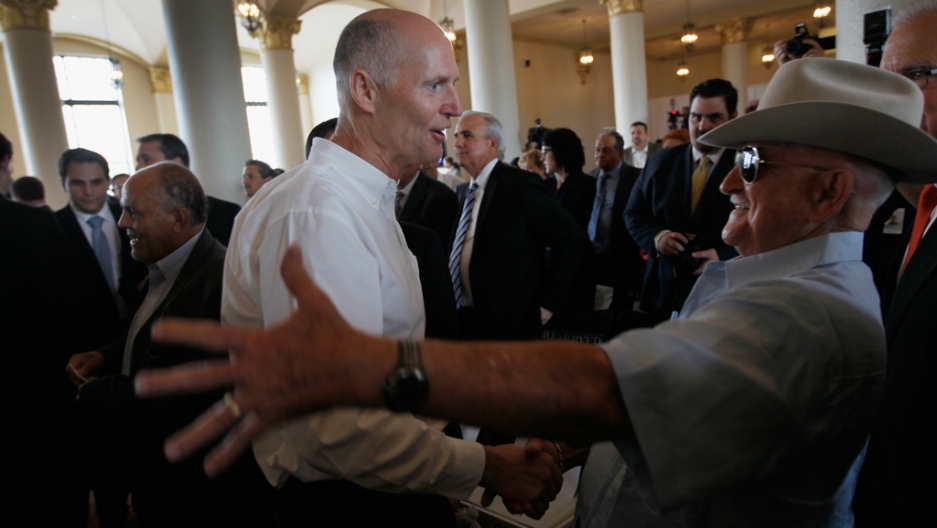 Florida Gov. Rick Scott, left, greets a supporter before signing a bill that bans business with companies tied to Cuba or Syria, on May 1 in Miami.
Credit: Joe Raedle
Share

HAVANA, Cuba — It’s been a rough stretch for the few companies that dare to do business on both sides of the Florida Straits.

Odebrecht, the Brazilian engineering and construction conglomerate, is now in litigation with the state of Florida over a new law that essentially bars the state and local governments from doing business with companies that have commercial ties to Cuba or Syria.

Pernod Ricard, the French global beverage distributor that partners with the Cuban government to distribute Havana Club rum, is on the verge of losing the brand’s trademark in US federal courts to rival Bacardi Corp.

And Spanish oil giant Repsol appears to be walking away from Cuba after sinking hundreds of millions into an unsuccessful bid to strike undersea crude — while fending off attacks from anti-Castro lawmakers in the US, where the company also has drilling leases.

Large global companies that operate in Cuba often maneuver around US trade restrictions by setting up subsidiary firms that don’t run afoul of the 1962 US Trading with the Enemy Act, the 1992 Torricelli Act or the 1996 Helms Burton Act, pillars of the longest-running economic sanctions in the world.

European companies like Nestle (Switzerland), Adidas (Germany) and Virgin Atlantic (UK) are some of the global brands that manage to do business in Cuba without running into trouble in the US, since Washington’s sanctions generally don’t apply to foreign firms that simply sell consumer goods and services in Cuba.

But other companies that have formed strategic partnerships with the Cuban government for major industrial projects have run into trouble under US laws like Helms-Burton, which punishes foreign businesses whose Cuba operations involve property that was nationalized after the 1959 Cuban Revolution.

That has been the case of the Canadian mining company Sherritt International, whose top executives are banned from traveling to the US because the firm processes nickel ore in Cuban facilities that were once US property.

Florida’s new law is a fresh attempt to add yet another disincentive for global companies that might want to work in Cuba. Though it does not specifically name Brazil’s Odebrecht, the legislation appears to be directly aimed at the company.

Odebrecht’s Florida-based subsidiary Odebrecht USA, Inc has earned nearly $4 billion since 1990 on public works projects in the state, according to The Miami Herald, completing landmark structures like the American Airlines Arena and a new terminal at the Miami International Airport.

Meanwhile, another Odebrecht subsidiary, COI Overseas Ltd, is the lead contractor on an $800 million project to overhaul the Cuban port of Mariel, with financial backing from the Brazilian government, which maintains friendly ties to Havana.

That attempt to make money across the Cuban ideological divide appears to have made Odebrecht a target for anti-Castro lawmakers in Florida, which is home to more than 1 million Cuban exiles and immigrants.

Florida lawmakers passed a bill in April barring local governments or the state of Florida from awarding public contracts worth more than $1 million to any firm that conducts business with Cuba or Syria. Singed by Gov. Rick Scott last month, the law is set to take effect on July 1.

Last week, Odebrecht filed suit against Florida arguing that only the US government — not individual states — has the right to set foreign trade policy or enforce sanctions.

It also insisted that Odebrecht USA and COI Overseas Ltd are distinct entities. Odebrecht USA “does not engage, and never has engaged, in business operations in Cuba,” the company said in a statement.

More from GlobalPost: Cuba without Chavez

It noted that the new law had placed the company in the awkward position of having to sue Florida’s Department of Transportation — the same agency it is trying to win contracts from for highway construction and other infrastructure projects.

Attorneys in Florida have indicated that legal precedence is on Odebrecht’s side. Even if the company wins in court, it will end up paying a political price that could hurt its chances at winning future contracts in the state.

It’s the same type of subtle pressure that may have contributed to Respol’s announcement last month that it is likely to withdraw from future oil exploration in Cuba. The company spent more than $100 million to drill in Cuban waters, hiring a state-of-the-art oil rig specifically designed to comply with US trade sanctions against Cuba.

As for Pernod Ricard, the US Supreme Court’s decision to uphold a judgment against the company ended a costly, 18-year court battle, and drew a harsh warning last week from the Cuban government, which threatened retaliation against US intellectual property.

"The disrespectful attitude of the United States against the rightful owners of Cuban brand Havana Club could endanger the rights of 6,000 trademarks and 800 patents of the US registered in our country," said Maria de los Angeles Sanchez, director of Cuba's Industrial Property Office.

Pernod Ricard will instead register a new trademark under the brand name “Havanista,” in case the embargo is ever lifted and Americans can once again buy Cuban rum.