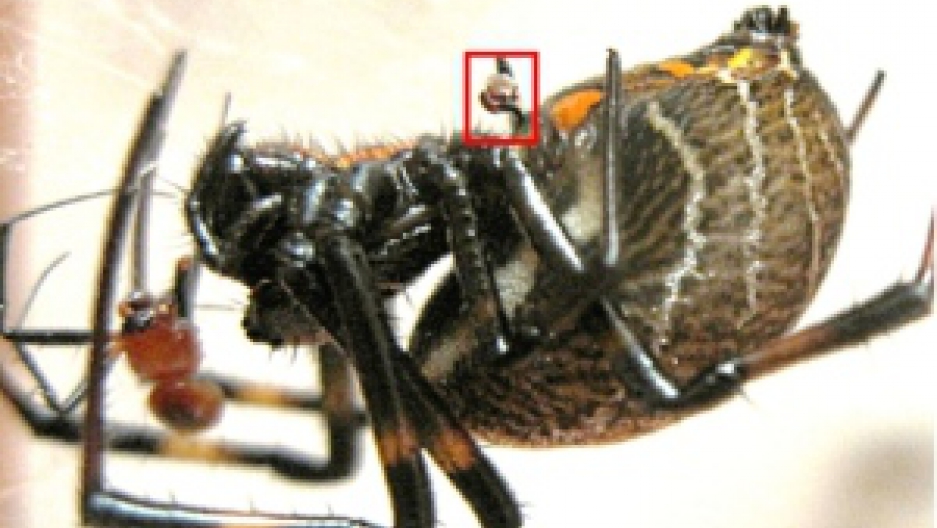 A botched attempt to escape. A male Nephilengys malabarensis snapped off his genitals (red box) in the female, but was eaten anyway.
Credit: JOELYN OH / from REF 1/Nature
Share

Researchers have concluded that male spiders castrate themselves so that their "manhood" doesn't weigh them down, according to a new study.

According to the study, published in the journal Biology Letters, the eunuch male spiders are better fighters because they're lighter after shedding their sperm-containing sacs.

Acording to Associate Professor Daiqin Li from the National University of Singapore, lead writer on the study, these eunuch spiders are more agile, and have an increased endurance.

Li and his colleagues studied a tropical species called Nephilengys malabarensis, in which the female generally cannibalizes the male during copulation.

During mating, male spiders would break off one of both of their sperm-containing palps. These palps have a tube that is inserted into the female spider to enable sperm to be transferred. When the palps break off, they remain attached to the tube and sit on the outside of the female's body.

Ideally, the broken male parts would plug the female genitals to prevent them from mating with other spiders. Only downside? The male spiders would be left sterile.

However, Li and his team found that other male spiders could actually easily remove this plug, so they hypothesized that there may be another reason for this voluntary castration, Discovery News reported.