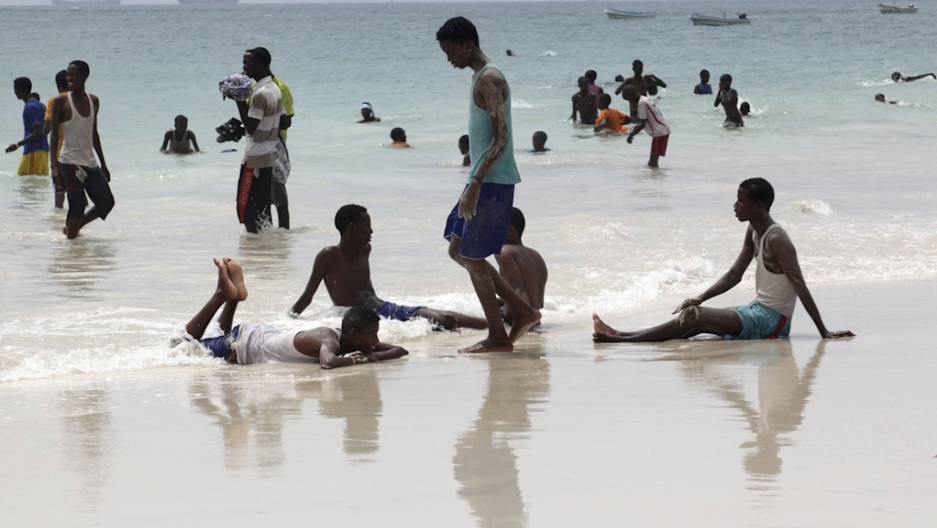 The beautiful beaches of Mogadishu: Somali youths relax along the beachside on the outskirts of Mogadishu for the first time in such great numbers since a surge in violence between al-Shabab Islamist militants and forces loyal to the embattled Somali government in recent years.
Credit: STRINGER
Share

The Associated Press described a new restaurant in an area of Mogadishu transformed from no-go zone to go-to destination (though customers must pass through security sweeps, and are protected by armed guards):

"Shirtless male swimmers reclined on lounge chairs nearby. Women in full-body bathing suits splashed in the ocean. Ice cream, seafood and hookah pipes are on the menu, though alcohol is not served since it is outlawed by the government," the story said.

After decades of war, Somali expats are taking advantage of the peace and coming home, along with foreign embassies and UN workers who had relocated to neighboring Kenya, another AP report said.

US assistant secretary of state Johnnie Carson visited the city on Sunday — the highest-ranking US official to visit Mogadishu since the Black Hawk Down battle of 1993.

More from GlobalPost: Mogadishu gets its first dry cleaners in over two decades

In another sign that Mogadishu is coming back to life, the city is even getting dry cleaners after going without for more than 20 years.

The BBC reported that 24-year-old Somali entrepreneur Mohamed Mahamoud Sheik decided to open "Somali Premium Laundry" after noticing that businessmen were taking their suits abroad just to get them clean.

Despite all the excited reports, Mogadishu hasn't arrived just yet: many buildings are bullet-riddled, bombed-out ruins, and the city still faces suicide attacks and roadside bombs.

In March, the National Theater re-opened in Mogadishu after two decades of being shut down. But just weeks later, Al Shabaab-linked militants set off of a suicide bomb at the theater that killed eight people including the head of Somalia's Olympic committee and the country's football chief.

Still, optimistic Somali government spokesman Abdirahman Omar Osman told the AP that Mogadishu is safer today than Baghdad or Kabul — and a tourism minister may even be appointed to attract tourists to the city.