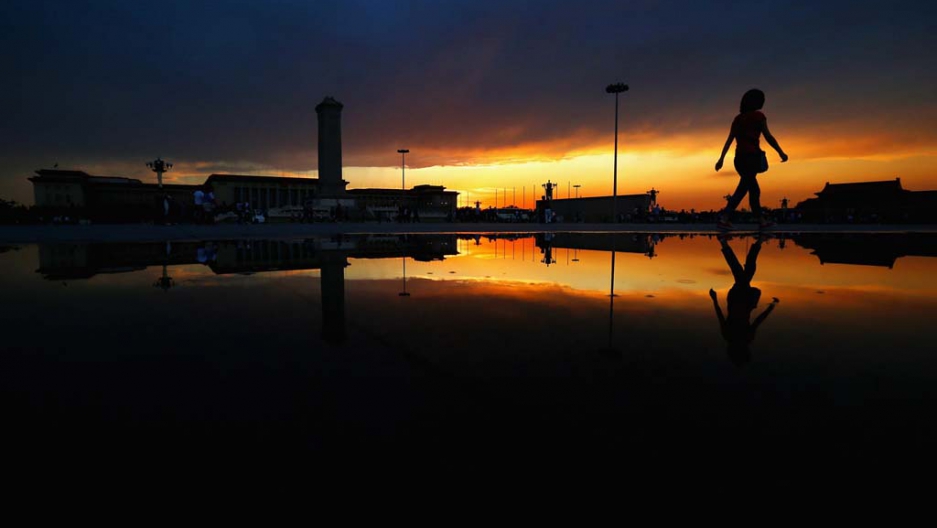 A tourist walks on the Tiananmen Square after heavy rain on June 9, 2012 in Beijing.
Credit: Feng Li
Share

TAIPEI, Taiwan — China is well known for its wrongs. An appalling human rights record and endemic corruption come to mind.

But China is also known for its opaque top-down political leadership, which makes it impossible for any outsider to know exactly what’s going on within the communistic monarchy.

It’s possible, therefore, that when it comes to reading the tea leaves on China, the rest of the world could get it wrong — China’s so-called “three illegals” immigration crackdown on foreigners, currently underway, could very well be one such case.

On May 15, Beijing began a campaign it says is meant to reign in a growing number of foreigners entering the country illegally, working without proper visas or overstaying the visas they have. Under this pretext, authorities are stopping non-Chinese on the street, sweeping neighborhoods where expatriates reside and requesting passports. Violators are threatened with fines, detention, even deportation.

According to Western media reports, the state is pushing ultra-nationalist sentiment at best — and xenophobia at worst. Pundits have referenced the Boxer Rebellion and Mao Zedong’s disastrous Cultural Revolution as possible harbingers of things to come.

More from GlobalPost: Is China turning against foreigners to cement control?

Other observers say it’s a knee-jerk reaction by an uneasy ruling class, who have been stung by the dramatic fall from power of Chongqing party chief Bo Xilai and the high-drama of blind activist Chen Guangcheng’s escape and subsequent relocation to the US on May 19.

But there’s something just about no one is talking about: We've known about the campaign for the better part of a year.

This well-publicized 100-day crackdown has been planned since the end of 2011, when a draft law on foreign immigration was introduced to the National People’s Congress for review.

The law is the first major overhaul of China’s immigration law since 1985, and requires foreigners to carry identification and register at their hotel or with local police. Chinese citizens are also encouraged to report foreigners who are illegal residents and or unlawfully employed.

Moreover, while the foreign press is casting the crackdown as something out of the ordinary, the reality is that it's anything but. The campaign resembles those in many Asian countries. It also amounts to foreigners being treated more like locals.

Lee Shiao-feng, a China political analyst at the National Taipei University of Education, says that expats are angry about their rights being violated in a country where locals themselves have none.

“China’s day-to-day isn’t decided by 10 old guys in a smoky backroom. It’s a huge country that still needs to be run through all of the bureaucratic machinery. The ruling elite is layered, often fractured and a lot more complex than that,” says Lee.

“This is the Communist playbook. Other countries in Asia have similar laws. Vietnam is one such example. Are foreigners really upset that they are being treated like the Chinese in China? What did they expect?”

But others say the crackdown, the first since Beijing hosted the Olympic Games in 2008, is exceptional and could bode particularly ill for expats in China, coming as it does on the back of strained relations between locals and foreigners.

Videos of poorly behaved foreigners have gone viral, earning hundreds of thousands of views on China’s version of YouTube. A TV host for a state-run network also sparked a furor when he tweeted that it was time to “sweep out the foreign trash." According to Wall Street Journal he also wrote: “we got rid of that foreign bitch,” in reference to a respected American Aljazeera journalist who was denied an extension of her journalist visa.

“I saw a lot of this in Taiwan in the late '90s, when media and politicians made foreigners scapegoats for other problems," said John L’Epagnol, who matches Western buyers with Chinese factories. "It’s ridiculous. China brought in about $120 billion in foreign investment last year and it’s easily the world’s largest exporter. These numbers don’t happen in a vacuum and we can’t conduct business via Skype,”

According to the China Statistics Bureau, about 594,000 foreigners were living in the country by the end of 2010. South Korea, the United States and Japan account for the top three home nations of expats in the Middle Kingdom.

Many are drawn to the fabulous wealth being generated in the world’s second largest — and still growing — economy.

In a report by state-run China Daily, Yang Huanning, vice-minister of Beijing Municipal Public Security Bureau, says that over 20,000 cases of immigration violations were processed in China last year. A large number of those, he says, were illegal aliens from Asian countries and Western English teachers working without employment visas.

“I don’t see anything wrong with the authorities going after people who break the laws. Why should Westerners get special treatment? Japan, Taiwan, Hong Kong and Korea have these crackdowns all the time, and nobody questions whether it’s politically motivated,” said James Harori, a Shanghai-based consultant, who partners Australian companies with cash-rich Chinese investors.

Some expats also say that China shouldn’t be judged by the same standards as centers such as London or New York, which have had decades or centuries to assimilate cultures into the fabric of their cities. China is largely homogenous, with Han Chinese composing more than 90 percent of its populace. It’s still something of a rarity to find foreigners who have gained citizenship and rarer still to find ones that haven’t married into it.

“We have no privacy. Nobody in China does. Locals get annoyed with us, because they think we're treated better than them, and mostly we are,” said Henry Acland, an editor with state-run news agency, Xinhua. “There was a lot of hysteria. It's calmed down now. It's just how China works. It lurches, but if you know the place well, it's no trouble. We're supposed to carry it [passports] around at all times anyway. But I never do.”