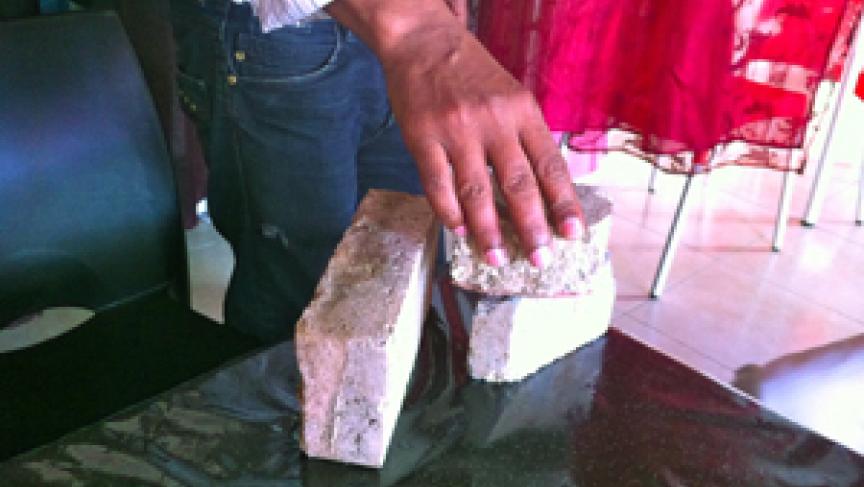 An African migrant in South Tel Aviv shows bricks he says were thrown at the front windows of his business. (Photo by Matthew Bell.)

Israel has started a campaign to deport African migrants.

More than 200 Africans have been arrested in recent days, most from South Sudan. And that’s where they’re expected to be repatriated.

The Israeli official behind the effort has said this is just the beginning. Nearly all of the 60,000 or so African migrants living in Israel, he said, will have to be deported.

At one time, Israel welcomed asylum seekers from war-torn Sudan. But the government has decided that the newly independent nation of South Sudan is safe.

An estimated 1,000 people from what is now South Sudan are in Israel. They were recently offered a deal: a free plane ticket and $1,200 to leave the country.

Then, a few days ago, immigration authorities started arresting African migrants by the dozens, mostly South Sudanese. They were told to empty their bank accounts and prepare to leave.

Adi Lerner, with the Hotline for Migrant Workers, a group that helps Africans in Israel, said rounding up immigrants from South Sudan is more of a political ploy than anything else. Some of those detained this week, she said, had already agreed to leave the country.

“What I would expect (from) any government, and the Israeli government in particular, is to try and solve the situation calmly and not to incite,” Lerner said. “Politicians, members of the Knesset, and ministers have done (so) during the last few weeks. This problem has been here for a long time and they can’t put the blame on the people who are seeking refuge.”

In one recent example, a right-wing lawmaker told a crowd at a Tel Aviv rally that the Sudanese are “a cancer” in the body of Israel. What followed were a number of attacks on African businesses, including a small shop run by 23-year-old Helen Barakhat from Eritrea.

Barakhat said a group of Israeli men forced their way into her shop, threw a brick at her, and then trashed the place while she hid in the bathroom with a friend.

“It was terrifying,” she said.

Now, she is thinking about leaving Israel, but doesn’t have many options.

Barakhat’s case illustrates the scope of the problem. About half of all the African migrants in Israel — around 35,000 people — are from Sudan and Eritrea. Israel doesn’t have diplomatic relations with Sudan and it can’t come to terms with Eritrea’s government on sending people back. That means tens of thousands of Africans languish illegally in Israel.

Most do not have permission to work. And they aren’t able to go anywhere else.

Meir Turgeman, a 54-year-old native of South Tel Aviv, said the African migrants in Israel are invaders who have brought crime and insecurity to the neighborhood. Turgeman is helping the locals take matters into their own hands, by organizing self-defense classes and creating neighborhood watch groups.

“We don’t like when these people take away our security and safety. We established a state for the security of the Jewish people and that is the only thing we have," Turgeman said.

When I mention the attack on the Eritrean woman’s shop, Turgeman does not openly applaud it. But he won’t condemn it either.

“These people are not part of the state,” he said.

But in recent weeks, the state is coming under more pressure to address the situation.

Foreign Ministry Spokesman Paul Hirschson is unequivocal about the incidents of violence against African migrants.

“These are criminal acts plain and simple,” he said.

Hirschson added that the anti-migrant rhetoric from some Israeli officials has also been unhelpful.

“It actually doesn’t reflect whatsoever who we are and how we behave. And it gives a distorted message to the foreign media and the foreign diplomatic corps and others that are here in Israel and to the world at large," he said.

Hirschson said Israel is working to address the issue of the African migrants in a responsible way on various levels.

The government is building a fence along the border with Egypt. Construction of a large new detention facility is under way. There is talk of putting up a tent city in the desert near the Sinai border for migrants. The parliament is working on legislation that would punish employers who hire illegal migrants with up to five years in prison.

But the long-term solution, Hirschon said, is really in Africa.

Until then, Israel might play host to sizable number of uninvited African guests.