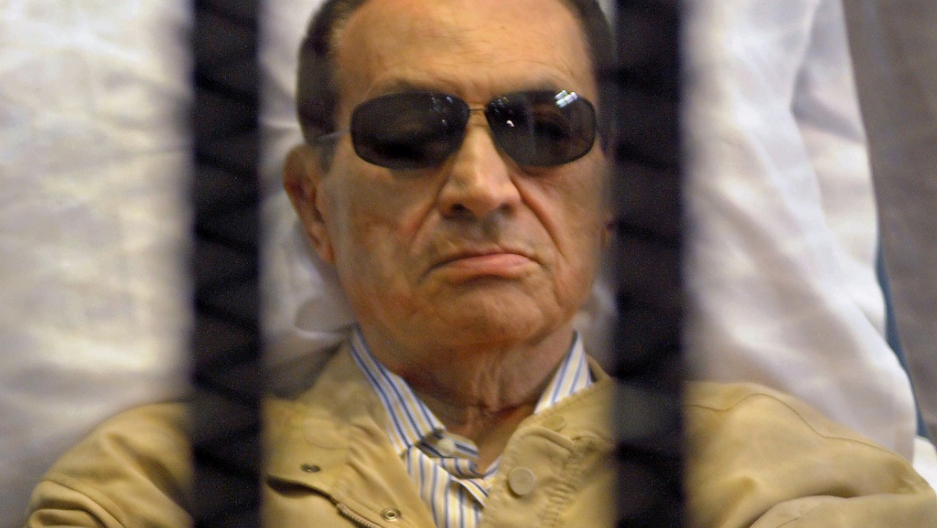 Ousted Egyptian president Hosni Mubarak sits inside a cage in a courtroom during his verdict hearing in Cairo on June 2, 2012. A judge sentenced Mubarak to life in prison after convicting him of involvement in the murder of protesters during the uprising that ousted him last year.
Credit: Stringer/
Share

CAIRO, Egypt — A recent maelstrom of conflicting media reports on the health of Egypt’s deposed and imprisoned leader, Hosni Mubarak, has left many Egyptians bewildered, suspicious and anxious ahead of next week’s divisive presidential runoffs.

Since June 2 — when the 84-year-old Mubarak, convicted of failing to prevent the killing of protesters during Egypt’s uprising last year, was admitted to a Cairo prison — a series of often contradictory media leaks have put the former strongman simultaneously in a full coma, without a pulse, or in stable condition and undergoing regular physiotherapy sessions.

One of the doctors in Egypt’s police force who was called on to help treat Mubarak last week, but who wished to stay anonymous because he was not authorized to speak to the media, confirmed to GlobalPost that the former leader has been diagnosed with an arrhythmia, or irregular heartbeat, and has been slipping in and out of consciousness over the past several days.

Mubarak, as one of Egypt’s so-called fallen Pharaohs, has been the object of both fascination and contempt since his ouster after 30 years in power. His descent from a decorated war hero-president to a tarnished dictator stunned not only Egyptians, but also perhaps Mubarak himself.

“I think [having to go to the prison] affected him psychologically, which impaired his immune system and led to his deterioration,” the doctor said, adding that Mubarak’s condition puts him at greater risk of stroke. “He is obviously depressed. He’s completely convinced he hasn’t done anything wrong, and that the treatment is unjustified.”

Despite long-time rumors of Mubarak’s bad health, even when he was still president, many Egyptians dismissed the recent reports as an attempt to distract the public from the real issues facing the country ahead of the presidential runoffs. Ahmad Shafiq, a former official under Mubarak, will face the Muslim Brotherhood’s Mohamed Morsi in the second round of voting on June 16.

Because many of the health leaks have come from security officials — many of whom observers say are still loyal to Mubarak — others feel they are attempts to drum up sympathy for the former president. His supporters hope he can be moved from the prison to a more comfortable facility. Mubarak was sentenced to life in prison by a criminal court earlier this month.

“I don’t really believe he’s that sick,” said Sarah Mohsen, a 22-year-old student at a café in downtown Cairo. “He was traumatized because he was forced to realize what he had done, and how the revolution had succeeded. And that shocked him.”

More from GlobalPost: Is Egypt's election losing all credibility?

“He should be transferred to a military hospital only if his health demands it. Otherwise, no,” said 53-year-old Medhat Al Sharkawy, who runs a spare car parts shop in Cairo. “He should be treated the same as any other prisoner.”

Mubarak reportedly requested that both of his sons — Alaa and Gamal, also at Tora awaiting trial on charges of insider trading — be transferred to adjacent cells so they can visit him regularly.

“People, and especially the revolutionaries, are always talking about human rights,” said Ayman Ghareeb, 42, a Cairo hotel manager. “So I don’t understand why they don’t want to treat him like a human. I don’t think an old man like that should suffer. But if he dies, everyone here will become less anxious.”