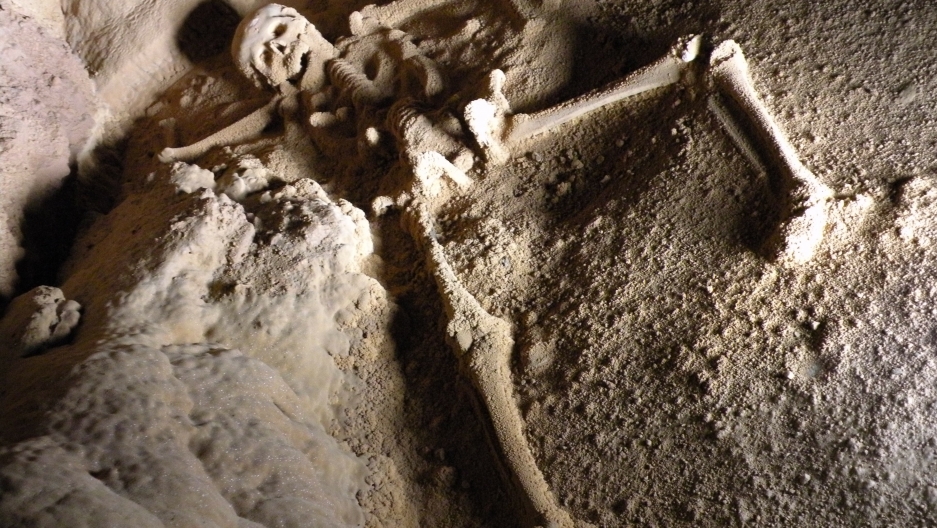 The crystal-coated skeletal remains of a human a sacrifice in Aktun Tunichil Muknal, a cave in the Cayo district of Belize.
Credit: Joshua Berman
Share

ANTIGUA, Guatemala — In the movie “2012,” a science fiction writer and his family escape from Los Angeles as the city sinks into the Pacific Ocean, then find safe haven aboard an ark shortly before a tsunami slams into Mount Everest.

The Hollywood film was partly inspired by fringe theories asserting that the winding down of the ancient Mayan Indian long-count calendar on Dec. 21, 2012, means the end of the world.

Mayan scholars have convincingly debunked this doomsday scenario. Yet 2012 earned nearly $800 million at the box office and helped popularize the notion that something ominous is about to happen. A recent poll showed that one in 10 people across the globe think that the Mayan calendar foresees a December apocalypse.

There’s been an upside to all this end-of-days hokum: it is expected to result in a surge of visitors to Guatemala and to the Yucatan peninsula in southern Mexico, the heart of the Mayan world. Officials in both countries — which have been hit hard by drug-related violence that has scared away foreign visitors — are predicting tourism will increase.

More from GlobalPost: Best places to watch the end of the world

“I know a lot of people who are coming to Guatemala because they think something will happen,” said Shay Addams, author of a book and a blog on the Mayan calendar.

“I’ve used the doomsday talk as a marketing hook,” added George Sansoucy, a former US businessman who now runs a travel agency in the colonial city of Antigua and is promoting December visits to Mayan ruins. “But it’s tongue-in-cheek. I mean, how many end-of-the-world scenarios have we had to deal with?”

Like the awarding of the 1992 Nobel Peace Prize to Mayan activist Rigoberta Menchu, the 2012 speculation has led to a renewed interest among outsiders in all things Mayan, according to Elizabeth Bell, a veteran tour operator in Guatemala. She said this validation is especially important given Guatemala’s long history of racism and abuse of Mayan Indians, who make up about half of the population.

“The Mayans say they feel an appreciation for their culture, which is extremely important,” Bell said. “They have been strengthened.”

The ancient Maya, who rose to prominence around 250 AD, were avid astronomers and mathematicians who invented the concept of zero. By studying the movement of the moon and stars they came up with a series of calendars, some of which are more accurate than the Gregorian calendar used today. These ancient calendars helped guide the Maya on key decisions such as when to plant crops or schedule ceremonies, Addams said.

The current controversy surrounds the so-called long-count calendar, which lasts 5,125 years. It began in 3114 BC and will come to an end on Dec. 21, the winter solstice. Yet there’s no record of any Mayan prediction that the world will end.

More from GlobalPost: Our totally subjective End of the World playlist

The sole reference to that specific date is on a Mayan glyph in Mexico that, by some interpretations, talks of gods descending to Earth followed by a period of darkness, Addams said. But doomsday theories dating back to the 1960s as well as New Age books and websites have combined this information along with predictions of solar flares and magnetic polar shifts as evidence that the end is at hand.

Or in the description of one commentator on the www.2012doomsday.com website:

The sun will ignite the pole reversal and crustal movement of earth in about a two-hour period. Massive earthquakes, tidal waves half a mile high. R U Ready?

Mayan experts dismiss such talk as idiotic. They point out that rather than ending, the Mayan calendar actually rolls over, like an odometer, and liken the Dec. 21, 2012, date to the end of one millennium and the start of another.

Mary Lou Ridinger, an archeologist and board member of the Maya Conservancy, an organization that works to protect ancient Mayan sites, points out that unlike modern societies, the ancient Maya were not linear thinkers. Instead, they viewed the past, present and future as intertwined, like spirals of DNA. In the Popol Vuh, the collection of writings containing the Mayan creation myth, there is no mention of death.

“All you see in the Popol Vuh is transformation, resurrection and rebirth,” Ridinger said.

More from GlobalPost: Top 10 end of the world predictions that didn't happen

“The numbers we found indicate an obsession with time and cycles of time, some of them very large," wrote archaeologist William Saturno of Boston University in the journal Science, which reported the discovery in May. "So much for the supposed end of the world."

Still, interest in the Mayan calendar is shaping up to be a huge draw. The vast majority of visitors are expected to descend on Chichen Itza, Tulum and other Mayan sites in Mexico, which has spent far more than Guatemala on promoting the 2012 phenomenon, according to Derek Steele, a Guatemalan who runs a marketing services company.

A record 22.6 million foreigners visited Mexico in 2011, up 2 percent over the previous year. However, the number of foreign visitors to Guatemala fell by 2.8 percent to 1 million, according to Inguat, the government tourist agency.

More from Global: How Obama’s daughter could save Mexican tourism

Although the Guatemala tourist board has formed a 2012 committee, Steele thinks the country is wasting a huge opportunity to boost tourism at a time when drug-fueled violence, often provoked by Mexican cartels, remains front-page news. In fact, Steele is leading a drive to promote tourism in Guatemala — “mala” means “bad” in Spanish — under a new name: Guate-Maya.

The nation’s 2012 activities kick off in Antigua this month with a conference on the Mayan calendar. But far more tourists are expected to arrive in December. Sansoucy said many want to be atop the Mayan pyramids at Tikal, El Mirador and other sites to mark the moment. But Addams, the author and blogger, will be staying home on Dec. 21.

“I don’t want to be near any major Mayan site,” he said, “because it’s going to be like Disneyland.”