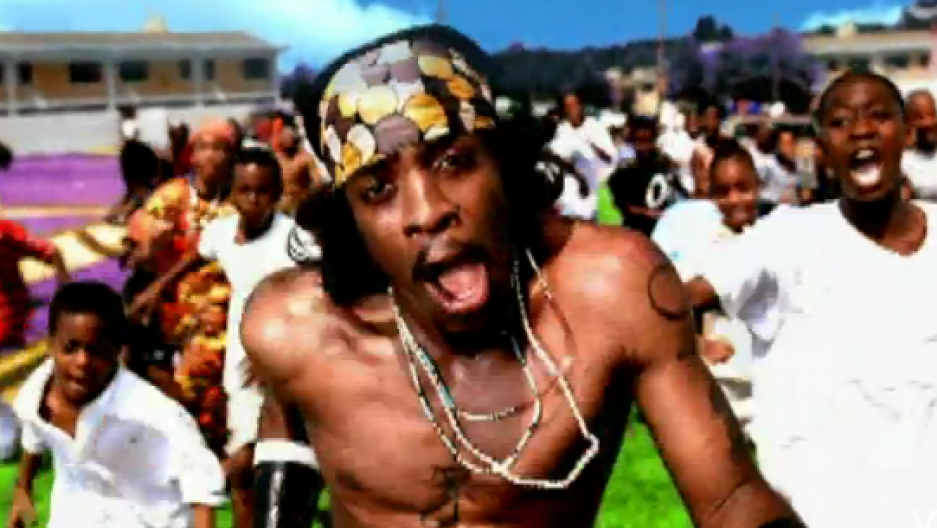 The bad news is that the world is ending; the good news is you’ve still got your iPod. Here’s an entirely subjective ordering of 20 songs to groove to while waiting on the apocalypse. These aren’t necessarily songs about the end of the world because, honestly, when the time comes, listening to R.E.M.’s “It’s the End of the World As We Know It” or Prince’s “1999” is going feel a little redundant. This is mood music to both stoke your fears and quell them, while giving your ears one last treat before the man comes around.

The title track to the Clash’s double-album masterpiece is three and twenty seconds of marauding, paranoid menace. From the indelible sturm and drang of its bass line to Joe Strummer’s sneering pronouncement that “phony Beatlemania has bitten the dust,” “London Calling” is the sound of a band hell-bent on either saving the world or destroying it, whichever comes first.

Only Sly Stone could fuse a string-laden 12/8 groove and sumptuous melody to a withering and deranged essay on late-1960s urban riots, just as only Sly Stone could see that twisted bit of ironic perfection go all the way to No. 2 on the Billboard Pop Charts. It’s stone-cold nihilism with a spoonful of sugar, and the exuberant declaration that “I’ll cloud nine when I want to!” is an epic middle-finger to the Temptations’ anti-drug hit of the previous year.

Nick Lowe wrote “Peace, Love, and Understanding” and recorded it with his band, Brimsley Schwartz, in 1974. Lowe’s rendition is an earnest, pretty and almost nostalgic lament, a quaint postscript to the receding Sixties. Five years later Elvis Costello took one look at Lowe’s original and, with the help of its maker (Lowe produced Costello’s version), effectively tore it to shreds. Costello’s “Peace, Love, and Understanding” is throbbing and grinding desperation, teetering at the brink of chaos. “So where are the strong, and who are the trusted?” spits Elvis, with a derision that implies he already knows the answer.

We’ve generally tried to steer clear of religious music on this list, if only because there are so many songs about the biblical apocalypse it’s essentially a genre unto itself. That said, the Carter Family’s “No Depression in Heaven” is such a wonderfully weird and powerful piece of music that it warrants inclusion. The song casts the 1929 Crash and its aftermath as divine punishment, and its simple refrain — “I’m going where there’s no Depression” — is so beautifully evocative it feels like found poetry. Alt-country pioneers Uncle Tupelo recorded the song on their 1990 debut, fittingly titled No Depression. Sometimes history is timeless.

The lead single off Outkast’s classic album Stankonia, which also featured the megahits “Ms. Jackson” and “So Fresh So Clean,” “B.O.B.” (“Bombs Over Baghdad”) actually failed to make the US pop charts upon its release. This isn’t entirely surprising, since “B.O.B.” remains one of the most musically and thematically audacious mainstream hip-hop singles ever released, a song that sounds like nuclear warheads, party music for the end of days. The drum track on this song alone might be the entire reason Sleigh Bells exist.

Not a song about the apocalypse, but as the final track on arguably the greatest rock and roll album ever made, you could do worse for endings. “I read the news today, oh boy,” might be the most portentous opening line ever written.

The Sex Pistols are an undeniably important band whose reputation rests more or less on three tracks, “Anarchy in the U.K.,” “Holidays in the Sun,” and this, the song that turned “no future” into an anthemic rallying cry. For all their musical ineptitude and self-destructive tendencies, at their best the Sex Pistols were smart as hell and “God Save the Queen” is so good it would have left them legends if it were the only thing they’d ever recorded. If it ever strikes you as ridiculous that this song was banned from the BBC you just haven’t listened to it recently.

Face it, when the world ends there’s gonna be a whole lot of panic and a whole, whole lot of sex, and that’s going to need a soundtrack too. For outlandish eroticism it’s hard to top Electrik Red, a trio of female singers produced by R&B maestro The-Dream. A friend once described this song as “something you’d hear at a strip club in outer space,” more than enough to land it on this list.

From 1968 to 1972 the Rolling Stones did pretty much everything well but apocalyptic tumult may have been their specialty: “Sympathy for the Devil,” “Street Fighting Man” and “Gimme Shelter” are among the most definitive markers of destruction and dread in rock and roll music. “Moonlight Mile,” the closing track of 1971’s Sticky Fingers, is something else entirely, an achingly beautiful meditation on finality whose grandiosity still carries a ragged organicism that’s unique to the Stones. “I’m just living to be lying by your side,” sings Jagger; if someone ever wrote a lyric like that about me I’d be just fine spending the end of the world with them.

For a guy with a well-earned reputation as one of pop’s great optimists, Stevie Wonder also has one hell of a dark side, never more blatantly than on this track off 1974’s Fulfillingness’ First Finale. While it’s admittedly an obnoxious move to write a song about how nobody’s going to heaven but yourself, when you’re good enough at music to make that song sound like Frédéric Chopin meets Mahalia Jackson you can get away with a lot.

When James passed away in early 2012, most tributes went straight to “At Last,” But “I’d Rather Go Blind” is a better piece of music by most measures. Aside from being one of the best soul songs ever written and a masterpiece of lyrical economy and suggestion, James turns in a vocal so raw and exposed it practically quivers. This isn’t a song about the apocalypse, but rather a song about how the end of a relationship can feel like the end of the world. It’s a hopeless cliché tackled here with such breathtaking honesty that it reinvents itself.

“Sign O’ The Times” is among the most “political” songs Prince has ever written, but it’s more lament than protest. It’s a vision of the 1980s cribbed from tabloid headlines and filtered through paranoia, Marvin Gaye’s “Inner City Blues” updated for Reagan, crack and AIDS. “Sign o’ the times, mess with your mind, hurry before it’s too late / let’s fall in love, get married have a baby / and call him Nate (if it’s a boy).” Well, when you put it that way.

“I don’t need you no more in this world / I’ll meet you on the next one, so don’t be late,” sings Hendrix, a line frequently heard as foreshadowing his own demise. I take one listen to the guitar on this track and can’t help but feel like he’s foreshadowing everyone else’s. Scorched earth via Fender Stratocaster.

Jeru the Damaja’s 1994 album The Sun Rises in the East is an unsung masterpiece of 1990s East Coast hip-hop, one that found an eccentrically cerebral MC teaming up with the peerless DJ Premier to make music that was both staggeringly creative and serious as a heart attack. “Ain’t The Devil Happy” features Premier transforming a sample from Lee Oskar’s schlock instrumental “Our Road” into one of the most ominous beats in all of rap while Jeru turns end-of-days pessimism into poetry.

Among the many haunting elements of this stunning track from Harvey’s most recent studio album, Let England Shake, is the strange exuberance with which it greets its themes of destruction and decay. Watching the world crumble with tender indifference, all against a shimmering electro backdrop: “Eyes are crying out for everything / Let it burn, let it burn.”

The final track on Led Zeppelin’s fourth album is simply one of the most inimitable pieces of rock music ever recorded. Zeppelin’s blues excursions could be notoriously hit-and-miss, but here they explode Memphis Minnie’s classic 1929 flood blues into an epic of fear, churning guitars and the greatest kick drum in recorded music. If aliens ever invade and demand that you explain Led Zeppelin in seven minutes, play them this and watch them run back to their spaceship in terror.

The title track to one of the greatest reggae albums ever made, Culture’s Two Sevens Clash is basically a concept album about the apocalypse, based on Marcus Garvey’s prediction that July 7, 1977 would see chaos unleashed throughout the world. The album was so popular in Jamaica that the city of Kingston actually closed down on the day in question, and rightfully so: the end of the world never grooved this hard.

Imagine Sherman’s March to the Sea but replace Sherman with Eldridge Cleaver and set the whole proceedings to the hardest beat the Bomb Squad ever produced and you’re only just starting to get the idea. This is not music to be argued with.

Written and produced by The-Dream, the only artist to appear on this list twice. Apocalyptic love songs are a rich genre (“Stand By Me” could have gone on this list as well), but the ferocity of Beyonce’s vocal matched with The-Dream’s songwriting and production make this one hard to top. A melodrama of ravishing beauty and a masterpiece of subtle evocation and strange menace. “I don’t know when I’m gonna die / but I hope I’m gonna die by you.” Yikes.

While popular mythology has crowned Robert Johnson the King of the Delta Blues, the designation really belongs to Patton, a figure of similar mystery (only one photo exists) whose legend is nearly as rich. According to lore he was a five-foot-five dynamo whose voice could carry five hundred yards without amplification, a guitar player of such charisma he would sometimes play a single song for an hour straight because nobody listening could stop dancing.

For all we’ll never know about Patton we thankfully still have his recordings, a handful of scratchy 78s that reveal one of the most extraordinary artists in all of American music. Perhaps the greatest of these is “High Water Everywhere,” a flood blues that stretches over two parts and runs six minutes long. Like “When the Levee Breaks,” “High Water Everywhere” was written about the Great Misssissippi Flood of 1927. It’s one of the most viscerally angry pieces of music ever made, Patton’s intensity rising with every devastated Delta town he name-checks: Sumner, Leland, Greenville, Rosedale, Vicksburg, a raging travelogue of lives laid to waste. At its core “High Water Everywhere” is a song about being poor, desperate and forsaken, picking up a guitar and screaming into the face of God. Patton stares down the apocalypse with a steel-eyed, unchecked fury; as last best hopes go, you can’t do much better.

Listen to GlobalPost's End of the World playlist on Spotify: