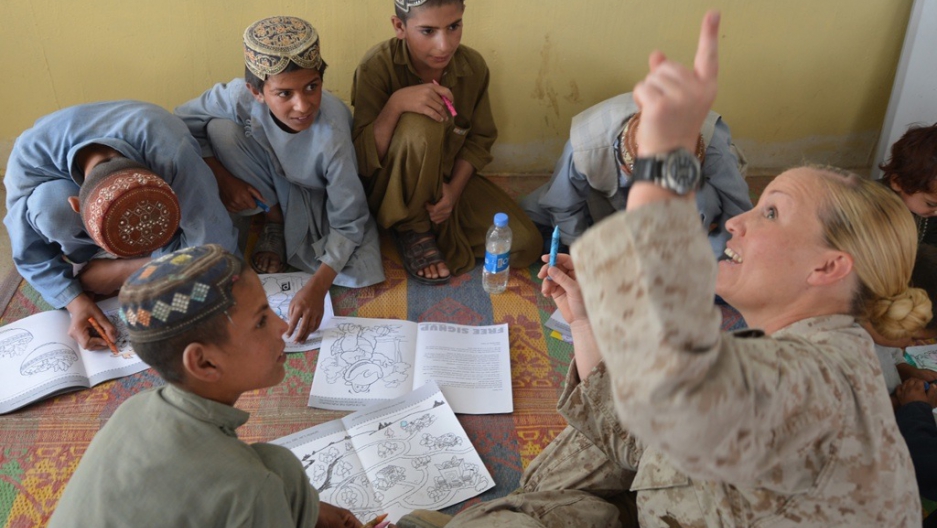 USN Hospital Corspman Amy Housley, right, gestures during a class for Afghan children given by the US Marines Female Engagement Team (FET) from the 1st battalion 7th Marines Regiment on June 7, 2012. The US-led war in Afghanistan has cost the lives of around 3,000 US and allied troops, seen thousands of Afghans killed and cost hundreds of billions of dollars.
Credit: Adek Berry
Share

Editor’s note: Jonathan Moore is a member of GlobalPost's Editorial Advisory Board.

CAMBRIDGE, Mass — The current debate about US counterinsurgency doctrine, mostly examined through the Afghanistan prism, overlooks fundamental intellectual and political misunderstandings and miscalculations at the core of the policy.

These principally involve the disconnect between the military and non-military realms of the counterinsurgency doctrine, known as COIN. The huge problem of effectively pursuing security and development at the same time in fiendishly complex international interventions, such as Afghanistan, has never been solved. COIN amounted to a new effort to do so: both fighting back the Taliban and, over time, building toward an independent, democratic and viable Afghanistan.

The operational lingo for COIN describes three interlocking components, in order: “fight, secure, build.” Fighting the Taliban is the combat phase, and the US military is best able to figure out how to do it. Securing, also part of the military mission, becomes more problematic because it requires more troops to continue to secure territory won, the need to begin cooperation with civilian support and the negative costs of occupation. The building phase ultimately depends on true development beyond the early reconstruction and rehabilitation activity of the military. This component becomes much more dependent on the performance of many other US, Afghan and international actors and assets, and can take an indeterminate period of time.

The real trouble lies in this third phase, because of the integrated nature of the COIN design. Working backward, success in building is necessary to sustain securing, and success in securing is necessary to continued success in fighting. So building becomes essential to the integrity of the whole doctrine; if it isn’t accomplished the rest cannot be sustained. Yet this third component of a primarily military concept is the responsibility of a huge, complicated agenda of non-military policies, authorities, specialists and resources. It is enormously challenging, beyond the control of anyone, and stretches way out in time.

This is more than schools and roads, eliminating poppies, supporting and buying local officials, all of which military forces undertake to some extent; these are manifestations of COIN’s admirable purpose of “winning the hearts and minds of the people.” But they are dysfunctional, as witnessed by the dilemma of fighting a war aggressively while pledged to reduce civilian casualties. The military doesn’t do real building, doesn’t know how to, and has little influence over it. So there is a disconnect here; in its culmination, the doctrine extends beyond its own competence and, in so doing, entraps itself.

What is missing is a serious understanding of what truly constitutes “building.” This is long-term, sustainable economic and social development, sometimes referred to casually as “nation-building.” The problems of underdevelopment — extreme poverty, fragile governance, instability and conflict — cannot be solved without it. Development requires massive continuing investment to bring about huge advancements in national capacity: major institution building, economic infrastructure, delivery of essential social services, reliable elections, basic public education, the rule of law, independent media, local government and civil society. Enough of this investment is not likely to be available. COIN’s casual treatment of development is a crucial part of its failure.

The underestimation by both the US and its Afghan partners in the capacity of each to fulfill their respective roles under COIN was monumental. Neither the Afghans nor the US acknowledged the size of the prodigious challenge: bringing a medieval country, severely underdeveloped with a fragmented population and a history of almost constant conflict, into one capable of accomplishing reform fairly quickly. The goal was to bring sustained security, stability, some degree of national cohesion, major cultural transformation and political and economic progress.

We were foolish. We expected President Hamid Karzai to do things he didn’t have the power to do, even if he had wanted to and wasn’t under such a tight time frame. In the creation of COIN, we failed to understand the inherent difficulties of the overall strategy, but we also failed to look at ourselves: We were incapable of predicting expenditures of $3 trillion and the deaths of 6,000 American soldiers across two wars, let alone anticipating the economic, political and social harm this involvement would mean to our own society.

After a while, it became apparent that the US wasn’t prepared to deliver on its side. We couldn’t keep troop surges going repeatedly and the “civilian surges” were a flop. Our domestic political opposition was building, and the money required simply wasn’t going to be there. President Obama has gradually moved away from nation building and toward withdrawal. Both represent belated acceptance of a mistaken mentality of which COIN was too central. There remains a war-fighting role and reiteration of continued US aid to help Afghanistan assure a resilient future. Necessary, but watch out.

Jonathan Moore is an associate at the Joan Shorenstein Center at Harvard’s Kennedy School. He previously served as the special assistant to the Secretary of Defense and as a senior advisor to the U.N. Development Program.