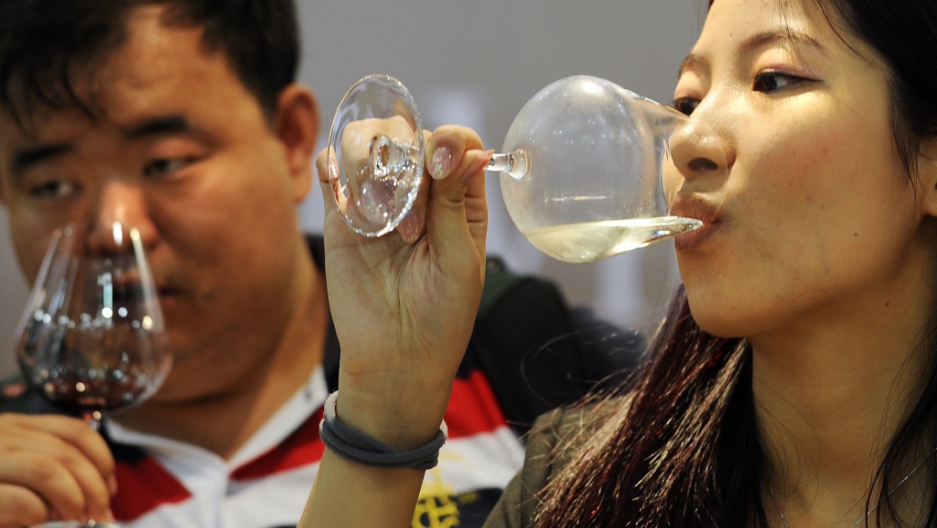 Chinese visitors sample imported wines during the Vinexpo Asia-Pacific trade fair in Hong Kong on May 30, 2012. Fruity reds are the kings of the Chinese wine market, but experts at Asia's biggest wine fair say women are leading a trend toward whites that will open new revenue streams for producers worldwide, including South Africa.
Credit: Laurent Fievet
Share

BEIJING, China — A creaky old Beijing supermarket recently underwent a bold renovation: The entire first floor was gutted, a traditional teashop was closed and all of it was replaced with a cavernous wine emporium and a huge tasting room.

Wine bars and boutiques are sprouting across Beijing, and trendy young consumers are flocking to wine-tastings at swish hotels. A dramatic 54 percent rise in wine consumption in China between 2011 and 2015 is predicted, a reflection of the increasing affluence of China’s middle classes, according to a new study by Vinexpo, Asia’s biggest wine exposition.

It’s a potentially lucrative market, yet it has traditionally been dominated by one country: France.

With its old-world prestige, France provides 40 per cent of all wine imports to China. Most famous among Chinese drinkers is wine from the Bordeaux region, prized for its history and name recognition as a status symbol as much as for its taste.

But now it’s facing a challenge from upstart producers such as South Africa, and from innovative new vintages that are designed specifically to accompany Chinese food.

Winemakers in South Africa, and elsewhere in the world, are desperate to expand into Asia. They face slumping sales figures in Western markets such as the UK, where profit margins are damaged by the growing preference for bargain-basement wines.

But reaching Chinese consumers isn’t easy. While winemakers the world over are captivated by the country’s booming market, many are struggling to reach a diverse and unfamiliar consumer base, according to a report by Dutch bank Rabobank, released at Vinexpo.

Chinese drinkers consume more than 1.5 million bottles of wine a year. About 85 percent of that total is produced in China, according to the Vinexpo survey from locally grown grapes and from imported bulk wine and grape juice concentrate. Nearly all of it is red wine, but the Chinese are starting to become interested in more exotic products, and white wine sales are slowly increasing.

Hein Koegelenberg, CEO of La Motte and Leopard’s Leap Wines in South Africa, thinks he has a winning idea: varietals produced specifically for the Chinese market, to match Chinese food and culture.

First, there’s the carefully considered brand name: L’Hugenot, a nod to South Africa’s wine history and the French Protestants who landed at the Cape in the mid-17th century, bringing with them France’s winemaking experience.

“We have to get the message through that South Africa has the same history of winemaking,” Koegelenberg said, admitting that having a French-sounding name is an advantage in China.

Then there are the wines themselves: a mid-range red and a white selected to match Chinese foods, and a pricier Shiraz dressed to impress in elaborate packaging, in order to tap into the Chinese gift-giving tradition.

The white is a Chenin Blanc, catering to a growing number of white wine drinkers in the coastal cities of southern and eastern China, such as Guangzhou, Xiamen and Shanghai, where seafood is popular.

The “drinking” red is a Shiraz-Pinotage, “blended for spiciness” and intended to match the richer dishes of inland northern China.

Furthermore, Koegelenberg has teamed up with a Chinese partner, admitting that he needs help in understanding the culture.

South Africa only contributes about 3 percent of Chinese wine imports, Koegelenberg said. But winemakers in South Africa, pointing to their country’s membership in the BRICS club of emerging economies, are pushing for a trade agreement with China on wine imports that would mean fewer taxes and lower prices.

The UK is South Africa’s biggest export market — though on the decline — followed by Germany and the Netherlands. Exports to Asia and other African countries showed “significant” annual growth between 2007 and 2011, according to SAWIS.

Chinese people are receptive to learning about wine and about the stories associated with individual producers, Meiburg said.

“Don’t let low-end wines drive South Africa’s entry into China,” she advised. “Bring your high-profile, ‘rock star’ cult winemakers to the country and let them seed a reputation of excellence.”