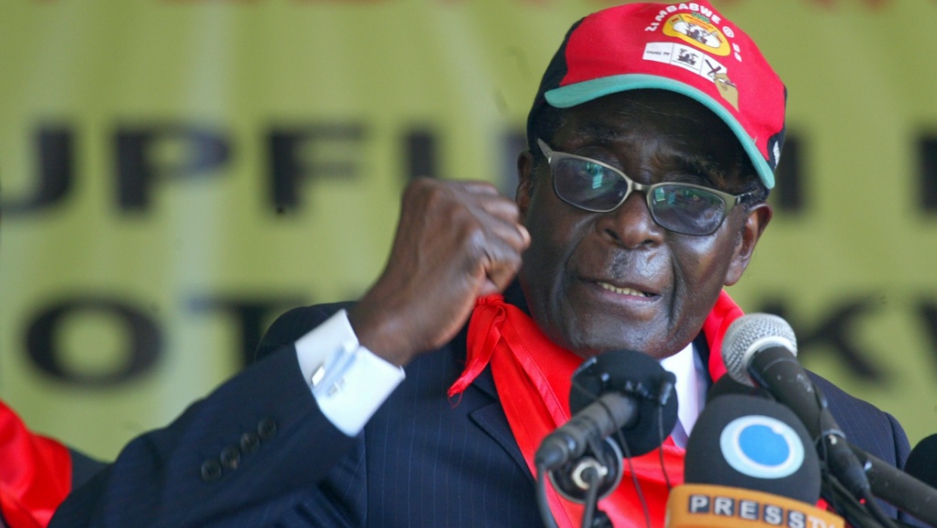 Zimbabwe's President Robert Mugabe speaks during a rally marking his 88th birthday in Mutare on February 25, 2012 with a trademark attack on gays and foreigners at a rally of his supporters.
Credit: Jekesai Njikizana
Share

Shaking his clenched fist, the Zimbabwean leader — 88 and in power for 32 years — harrangued a group of southern African leaders, telling them that South Africa's ruling party, the African National Congress, must stop an investigation into charges that Mugabe's regime has tortured its critics.

Speaking in Harare at a convention southern African liberation movements, Mugabe said the recent decision by South Africa's courts which ordered a probe into allegations of torture and other human rights abuses in Zimbabwe "a racist assault" by whites against black majority rule, reported Associated Press.

Mugabe said that South African President Jacob Zuma and other ANC leaders in South Africa must "apply every means at their disposal" to prevent the court-ordered investigation against Zimbabwean police officers and others. Calling the white South Africa judge who made the ruling "a boer," a pejorative term for whites, Mugabe said the ruling came from whites "still in our midst yearning for the old flags" of Rhodesia and apartheid South Africa.

Mugabe was speaking to representatives of the liberation movements that ended colonial rule in Angola, Mozambique, Namibia, South Africa and Tanzania, and that all remain in power more than 30 years later.

Mugabe was on the offensive after receving a sharp setback from regional leaders last week, when the summit of the 15-nation Southern African Development Community (SADC) refused to endorse the Zimbabwean autocrat's plans to hold elections this year, without a new constitution and reforms to ensure free and fair elections.

The SADC insistence that Zimbabwe must agree to a new constitution and substantial reforms before elections infuriated Mugabe, according to Zimbabwe commentators.

"SADC stuck to its guns and I'm sure it will continue sticking to its guns because changing at this point would have fatally impaired the credibility and sincerity of the regional leaders," said Eldred Musunungure, a professor at the University of Zimbabwe, according to the Zimbabwe Independent. Mugabe's call to SADC to allow him to hold elections without reforms "was a gamble he was never going to win. He was shooting in the dark," said Musunungure.

By refusing to endorse Mugabe's call for elections this year, the leaders of southern Africa are restricting Mugabe's room for maneuver. They are trying to prevent a repeat of Zimbabwe's 2008 elections in which some 300 people were killed in political violence and there were charges of widespread vote-rigging by Mugabe's regime. By pressing for fully free and fair elections, the SADC leaders are aware that they are pushing Mugabe to allow himself to be voted out of office.

Mugabe shows no signs of allowing that to happen.

His Zanu-PF party continues to press for the new constitution to increase the power of the president, reported Voice of the People. And he is appealing to the ruling liberation movements of southern Africa to stand by him, painting his oppositon as the stooges of whites and the West. However the region's other liberation movements have stayed in power by making significant reforms and they are aware that if they stick with Mugabe, they could see Zimbabwe return to prolonged instability and that would be bad for the entire southern African region.

If the regional leaders hold firm against Mugabe, this could be a significant check to his desire to continue in power.

Mugabe has been in power since Zimbabwe became independent from Britain in 1980. He was forced by SADC to form a coalition government with opposition leader Morgan Tsvangirai and his Movement for Democratic Change (MDC) after violent and disputed elections in 2008. In the unwieldy coalition, Mugabe has maintained control of the army, security, police and several other key arms of government. He is pressing for early elections to regain full control of government. Tsvangirai and others warn of a return to political violence before the elections, and some MDC officials have recently been killed.

Mugabe has reason to be angry at southern Africa's ruling parties, their pressure on him may be the first step to free and fair elections in Zimbabwe that will see him and his Zanu-PF voted from power.